Baseball historians pull back curtain on Wizard of York

YORK – He was known for his glove, his speed and his personality.  “Country Jake” Stephens was a two-time Negro League All-Star who spent prac... 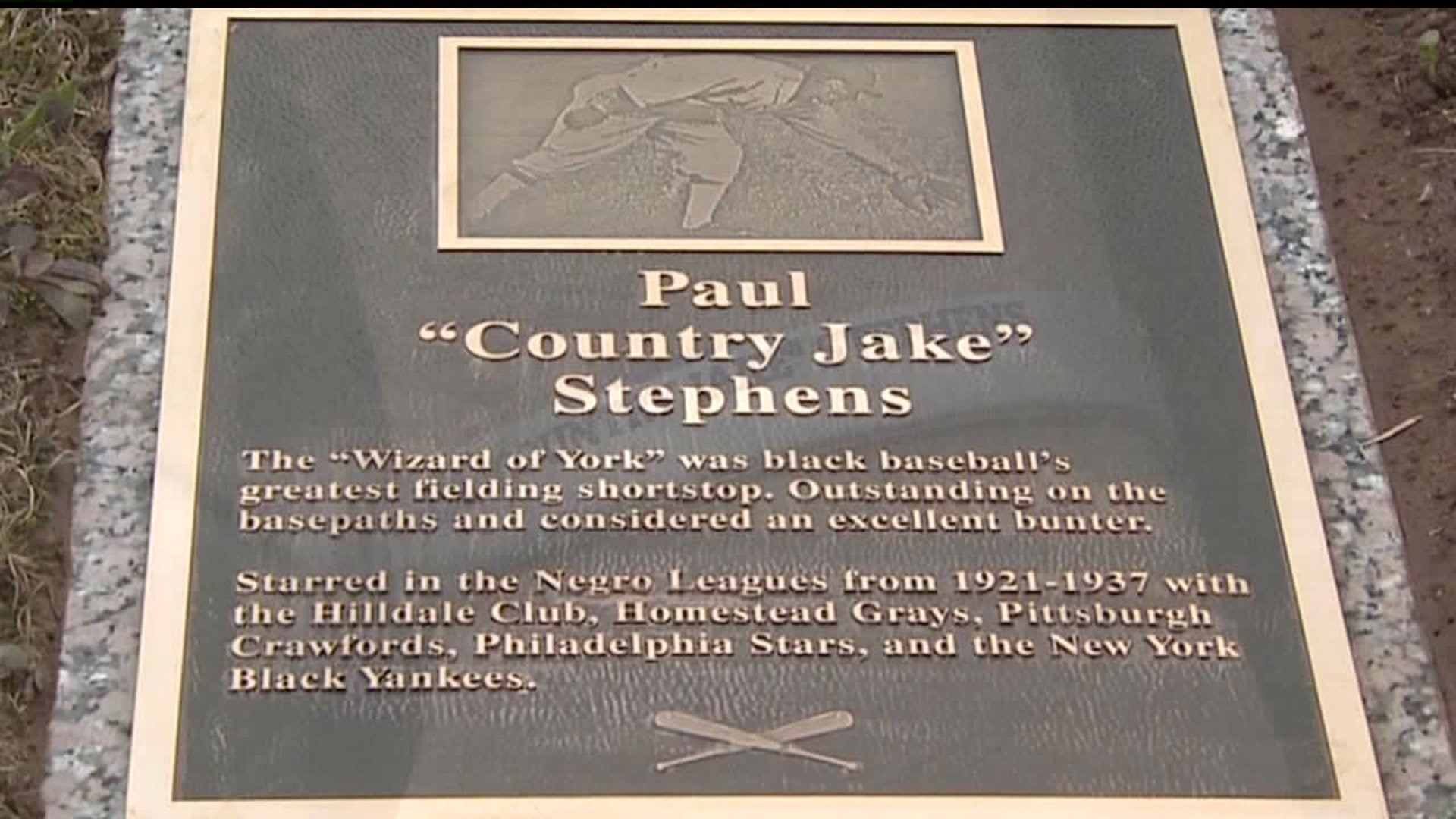 YORK - He was known for his glove, his speed and his personality.  "Country Jake" Stephens was a two-time Negro League All-Star who spent practically his entire life in York County.  Yet most people have never heard of him.  A group of baseball historians decided it was time for that to change.

Tucked away in a quiet corner of Mt. Zion Cemetery in York County, there's a very ordinary-looking headstone that reads "Paul Eugene Stephens."  But he was better known as "Country Jake."

On a chilly weekend in April, several members of the Society for American Baseball Research gathered at the cemetery for a special presentation.  Ira Wolins from Philadelphia presented a permanent marker for Stephens' grave, recognizing the Wizard of York as the greatest fielding shortstop in the Negro Leagues.

"I thought it might be a great idea to get a plaque made for him because his tombstone is very plain.  It just has his name, birth date and death date," said Wolins.  "No one knows that this guy from York played ball before Jackie Robinson."

Wolins came up with the idea for the plaque five years ago after reading a book about Stephens.  The historian raised part of the money for the marker by selling "Country Jake" bracelets at minor league baseball games.  He paid for the rest of it himself.

But the plaque only tells part of the story.

Born in 1900, Paul Stephens grew up in a part of East York known as Bullfrog Alley.  They didn't have t-ball or little league back then, but according to Mechanicsburg's Fred Brillhart, Stephens' arm was already attracting attention.

"Going to grade school, Stephens threw snowballs at my grandmother," said Brillhart.  "And he could throw a snowball really hard."

Stephens got his big break into the Negro Leagues in 1921 after sending a fake telegram or some sort of letter to Hilldale owner Ed Bolden, talking about this great young prospect in York.  Whatever it was, it worked.  Stephens got a tryout, and he made the team.

Nicknamed "Country Jake" because of his easygoing personality and sense of humor, the crafty shortstop quickly became known more for his glove than his bat.

"He didn't high for average, he didn't hit a lot of homeruns, but he was a fast player, a great bunter, and he was very courteous," Wolins said.  "He'd talk people off of second base.  He'd say 'Excuse me, let me clean that base off for you.'  Meanwhile he'd have the ball in his glove.  The player would step off, he'd tag them and the guy would be out."

As shown in this iconic photo from 1924, Stephens took part in the first Negro League World Series between his Hilldale Club and the Kansas City Monarchs.

After Hilldale, Stephens went on to play for two of the best Negro League teams in history, the Homestead Grays and the Pittsburgh Crawfords, playing alongside future Hall of Famers like Josh Gibson and Satchel Paige.

Harrisburg's Ted Knorr thinks that Stephens' outstanding defense deserves the same recognition as that of a former Baltimore shortstop.

After a 17-year career, Stephens retired from baseball and returned to York, where he worked for the DMV and became a deputy sheriff.

Stephens also spent time at the Mt. Zion Cemetery, recalls Brillhart.  "He supposedly used to come here and eat dinner at a picnic table.  He would talk to his relatives who are all buried right here.  He'd have a spiritual connection and it was a way he cleared his mind."

Paul Stephens died in 1981.  But thanks to this group of dedicated historians and volunteers, the legacy of "Country Jake" will live on.