6 Baltimore police officers charged in the death of Freddie Gray

BALTIMORE — The six police officers charged in the death of Freddie Gray have paid bail, according to online court records. Bail for Caesar Goodson, Alici... 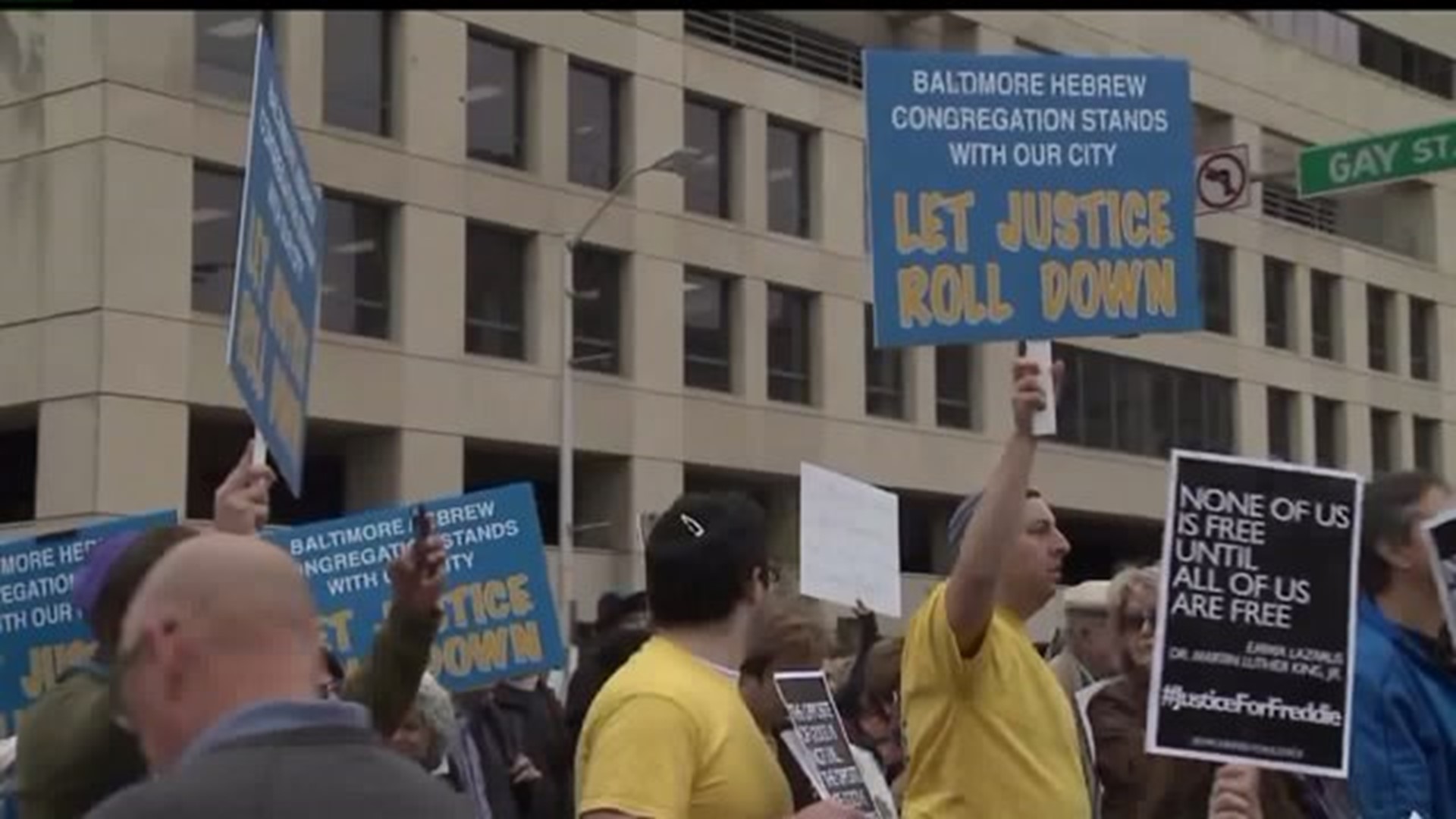 BALTIMORE -- The six police officers charged in the death of Freddie Gray have paid bail, according to online court records. Bail for Caesar Goodson, Alicia White, William Porter and Brian Rice had been set at $350,000 each. Edward Nero and Garrett Miller each had a bail of $250,000.

• 6:48 p.m. Marches continue Friday night in Baltimore as hundreds trek past booking centers where the officers were processed.

• 5:09 p.m.: William Murphy, an attorney for the Gray family, says this is the time to call for change in how police deal with suspects. "If Freddie Gray is not to die in vain we must seize this opportunity to reform police departments throughout this country."

Six Baltimore police officers will face charges in the death of Freddie Gray, the city's prosecutor said Friday in an unexpected announcement that brought cheers from protesters and words of protest from the police union.

The announcement by Bsaltimore City State's Attorney Marilyn Mosby left no doubt about what she thinks happened April 12, when Gray was arrested: The 25-year-old died, she said, after suffering "a severe and critical neck injury" while being transported "handcuffed, shackled by his feet and unrestrained" inside a police van. It is against police policy to transport a prisoner without proper restraints such as a seat belt.

But the city's police union insisted that none of the officers was responsible for Gray's death.

"To the contrary, at all times, each of the officers diligently balanced their obligations to protect Mr. Gray and discharge their duties to protect the public," wrote Baltimore City Fraternal Order of Police President Gene Ryan.

The driver of the van, Officer Caesar R. Goodson Jr. received the most serious charge: second-degree depraved-heart murder, among other accusations -- including manslaughter by vehicle.

Charges against the other officers varied. All are accused of misconduct and second-degree assault. Three are charged with involuntary manslaughter.

The six have a preliminary hearing on May 27, according to court documents available on the state of Maryland's Judiciary Case Search website.

The police union called for an independent prosecutor, saying Mosby has conflicts of interests. They also criticized her for not waiting until police were done with their inquiry.

"Let me begin by stating how appalled and frustrated we are at this morning's events. .... We are disappointed in the apparent rush to judgment given the fact that the investigation into this matter has not been concluded," said Gene Ryan, president of the police union, at a news conference. "Our officers, like every other American, are entitled to due process."

An attorney for the union, the Baltimore Fraternal Order of Police, said the officers did nothing wrong.

"No officer injured Mr. Gray, caused harm to Mr. Gray, and they are truly saddened by his death," Michael Davey, told reporters.

Freddie Gray's stepfather, told reporters at a separate news conference that the family is satisfied with the charges announced. "These charges are an important step in getting justice for Freddie," Richard Shipley said.

Word of Mosby's decision quickly filtered through Baltimore and across the country.

Jubilant protesters, who just hours before had been decrying what they called the slow pace of the investigation, honked horns and cheered in the streets, happy, for the moment at least, that the justice they had demanded appeared to be taking its course.

"Did we expect something this monumental? No," the Rev. Walter Scott Thomas of New Faith Psalmist Baptist Church said. "But are we excited about it? Absolutely."

Across the country, people took to social media to cheer the decision.

"Let me tell you I just sat and watched Marilyn Mosby speak and as she announced everything I shed a tear..someone finally got it right," Twitter user TaviBabi wrote.

Mosby and other leaders called for peaceful protests in the wake of the charges, saying unrest would only cause further harm.

Hundreds of people marched Friday evening near the Baltimore Central Booking and Intake Center, where the six officers were processed. The large procession continued through downtown, occasionally blocking traffic.

Police officers arrested Gray on April 12. He slipped into a coma after suffering his injuries and died a week later.

According to Mosby's narrative, the incident began when two police officers on bike patrol "made eye contact" with Gray, who then began to run.

Officers caught up to him, he surrendered and was placed on the ground, arms handcuffed behind his back. He said he couldn't breathe and asked for an inhaler, "to no avail," Mosby said.

Although police found a knife in Gray's pants, it was a variety allowed by Maryland law, and police had no reason to detain him, the prosecutors said. Still, they called for a police transport van to take him away.

Once the van arrived, officers loaded Gray, in handcuffs, into the van. They did not put a seat belt on him as required by department policy, Mosby said.

Goodson stopped the van four times over the course of the approximately 40-minute ride, and at the first stop officers took Gray out, put shackles on his ankles and placed him -- still handcuffed -- headfirst and on his stomach in the back.

At the last stop Goodson picked up another man who was put in the back of the van on the other side of the partition that keeps prisoners separated.

Donta Allen, the second prisoner in the van, told CNN's Don Lemon that a report saying he had told investigators that Gray was trying to hurt himself during the trip was "untrue -- very, very, very untrue. I haven't talked to no investigators. ... The only person I talked to was homicide."

Allen told Lemon that a separate report of Gray being irate and screaming in the van was "absolutely untrue. ... Never heard him (Gray). The only thing that I heard was a little banging, like he, I thought he was banging, someone was over there banging their head or something."

Mosby said Goodson and other officers who saw Gray's condition failed to get him medical help, despite his requests, until arrival at the Western District Police Station.

By then, Mosby said, he was no longer breathing.

Gray was rushed to a University of Maryland medical facility where he underwent surgery. He died a week later.

Mosby, who has a rich family history in law enforcement, said it was important not to paint the entire police department as villains.

"I can tell you that the actions of these officers will not and should not in any way damage the important working relationships between police and prosecutors as we continue to fight together to reduce crime in Baltimore."

And she called on protesters to remain peaceful in the wake of the announcement.

"This is a moment. This is your moment," she said, addressing the city's youth. "Let's ensure that we have peaceful and productive rallies that will develop structural and systemic changes for generations to come.

"To the people of Baltimore and demonstrators across America, I heard your call for, 'No justice, no peace'," she said. "Your peace is sincerely needed as I work to deliver justice on behalf of this young man."