"From once he said ALS, I have no clue of what he said after that": Beloved coach faces his toughest opponent yet as players rally around him

'Coach Rob' has guided young baseball and basketball players throughout their journeys. Now, they are helping him 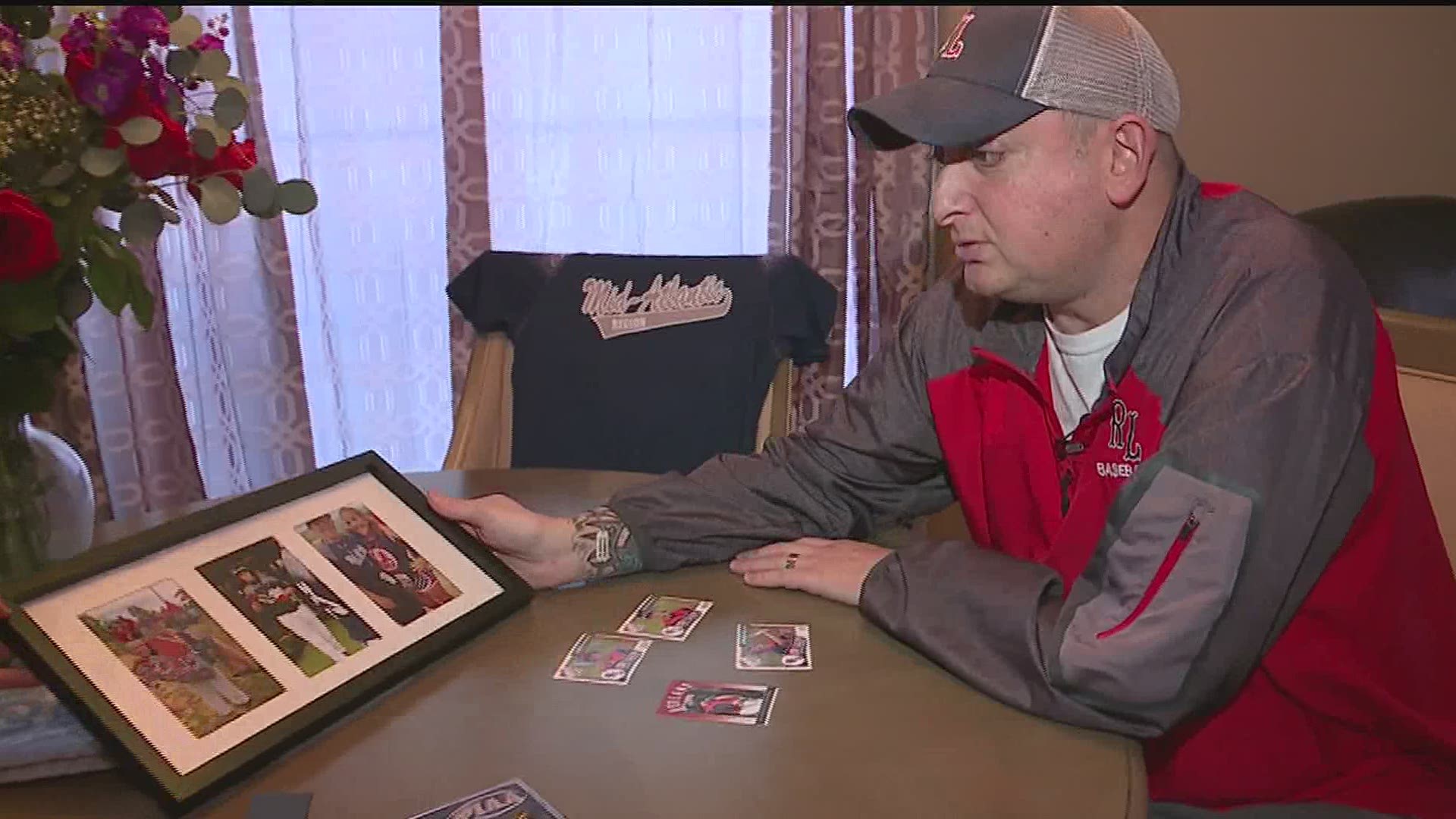 Rob Gildea's basement is a trophy case of memories.

'Coach Rob' can name every player, from every year. He can name every moment of every game, from who hit the winning ball, to the reactions he witnessed of the people in the stands, to the final hoop that clutched the buzzer-beater for his basketball team.

"This is Ethan freshman year, and this is Ethan this past season," he says as he climbs down the steps, looking at the photos of teams past. He must be quite the player, I remark.

"He's alright," Gildea says with a smile and a laugh.

It's that laugh that Rob Gildea is known for as the basketball and baseball coach strolls up and down the court and field each season, stopping along the way to speak to young players who decide to take a rest. For Gildea, those moments on the sidelines are times to connect, providing advice and encouragement to every player as he inquires about their futures ahead.

But, away from the crowds, in the quiet moments in his house, Gildea's face turns serious as I ask him about the past years he's faced. He pauses several times as he scrolls through the memories in his head, cataloging the months of questions that plagued him privately and the multiple doctors who examined his symptoms piece by piece.

"It sucks, but it is what it is," Gildea says with a sigh.

'It' started at the beginning of one basketball season when Gildea began to feel a sensation of weakness in his left arm.

"So I went to our trainer at the high school, right before practice I went to the trainer and I said, 'hey what do you think?' He said, you might have a torn rotator cuff, get in to see the doc," said Gildea.

Gildea heeded the advice, visiting one doctor, then another, undergoing Xrays and physical therapy along with MRI's and multiple nerve studies. But, the answer still seemed out of reach.

How many of you miss baseball? Before the COVID-19 shutdown, young players were gearing up for the season ahead. Now, their games are canceled. But one thing remains- a coach who is ready to help them through the journey, even as he faces his toughest opponent yet. See his story on WPMT FOX43 Sunday at 11, FOX43 Sports West Shore School District

October 21, 2019, Gildea was joined by his wife Cathleen, to face another appointment.

"You could hear the difference, especially when you get on my left arm. You could hear that, it wasn't as active," said Gildea, when he discussed the nerve study he faced that particular day.

The doctor left the room and told Gildea to get dressed. But, when the doctor came back in, he was armed with a diagnosis that would finally answer Gildea's questions.

"From once he said ALS, I have no clue of what he said after that," said Gildea. "Like he talked, but I..." Gildea paused as he shook his head and gave a shoulder shrug.

Gildea's doctor described ALS to FOX43 as a disease of 'progressive weakness,' generally affecting two types of motor nerves connecting the brain to the spinal cord and the spinal cord to the muscle.

The ALS association explains further, describing the progression of ALS like this, "when the motor neurons die, the ability of the brain to initiate and control muscle movement is lost. With voluntary muscle action progressively affected, patients in the later stages of the disease may become totally paralyzed."

"ALS is, there is no blood test, there is no specific test for it. They kind of have to rule everything out," said Gildea, who added his case took nearly two years to diagnose.

"Lou Gehrig came out and announced that he had ALS and we still can't determine, we still can't cure ALS," said Gildea. "And the neurologist told me we can't figure out what causes ALS."

Gildea is the only person in his family's history to be diagnosed with ALS. He said doctors attribute his case possibly to his military service as Gildea is a veteran of the U.S. Army.

"I don't have a choice but to deal with it. Like, I have to play the hand that's dealt to me," he said, as he added the hardest thing for him to do every day is button a button. Gildea also struggles at many times to write.

Gildea now has a team of doctors in place ready to track his progression. However, the 2020 COVID-19 crisis has delayed Gildea's recent doctor appointments and he will not see his doctor again until this summer. Meantime, he waits to learn how his ALS has progressed since his last appointment.

Before the COVID-19 crisis hit, he celebrated with the players he coached through every game. Now, his players are helping to support him as he faces his toughest challenge yet. See his story, WPMT FOX43 at 11 on FOX43 Sports West Shore School District

Gildea credits his family for keeping him strong, his children, and the 'love of his life' Cathleen.

Gildea's list of coaching credentials stretches from JV baseball to little league to freshman boys baseball. In 2020, he continued to coach the basketball team but he decided to step away from baseball in order to watch Ethan on his varsity team. Before the COVID-19 shutdown canceled the baseball season, Gildea had also planned to announce games for the varsity players and act as a DJ at the games.

Gildea was celebrated by students during one basketball game this past winter. See photos from that event here.

Read the impact Rob Gildea has had on the community in the words of his own players and fellow coaches:

"The hardest part of this for me is to see the impact that he has had on my own children. You know, and me individually getting me back into coaching is something that 5 years ago I never would have thought would have happened, especially here at Red Land High School. But, he has a way of connecting with people and I've seen that not only with his players and not only with community members but with my own children. And, so anything that I can do to be able to help him to be by his side through all of the difficult battles that he faces, you know, I certainly want for him to know just how much he's meant to so many of us."

"There are certain people that you see and every time you see them they put a smile on your face and Rob's that guy. He's always positive. He's always uplifting. You know, like no matter how your game was, no matter if you struck out, no matter if you hit two home runs Rob's always there with a smile and a hug. He's the most positive guy I know."

"I have known him probably since I was like 10-years-old so he's always been one of my closest coaches I'd say... He just encouraged me every time I'm out on the field and he always wants the best out of all of us."

"Just because of how much he cares about everyone, I mean, it definitely has made a huge impact on my life. Just showing how much you can impact someone's life by just showing that you care and giving the time and just trying to make them a better person."

"I could be doing bad and he'd always tell me like 'cheer up it's not that bad it will get better.'"

"He's one of the people I look up to. He's a great role model and he's just fun to be around."

"He means everything to this team. He brings the team together. Just, a great guy. We love you Coach Rob."

Remember these faces? The 2015 'Little League' champs that aren't so little anymore. The big inspiration they find in one man, who right now, is facing a big opponent of his own. See the story, tonight on WPMT FOX43 at 11, on FOX43 Sports West Shore School District