Men in uniform | Birth of a militia

The Pennsylvania Volunteer Militia dresses in military garb. The similarities between military and militia uniforms aren’t a coincidence, experts said. 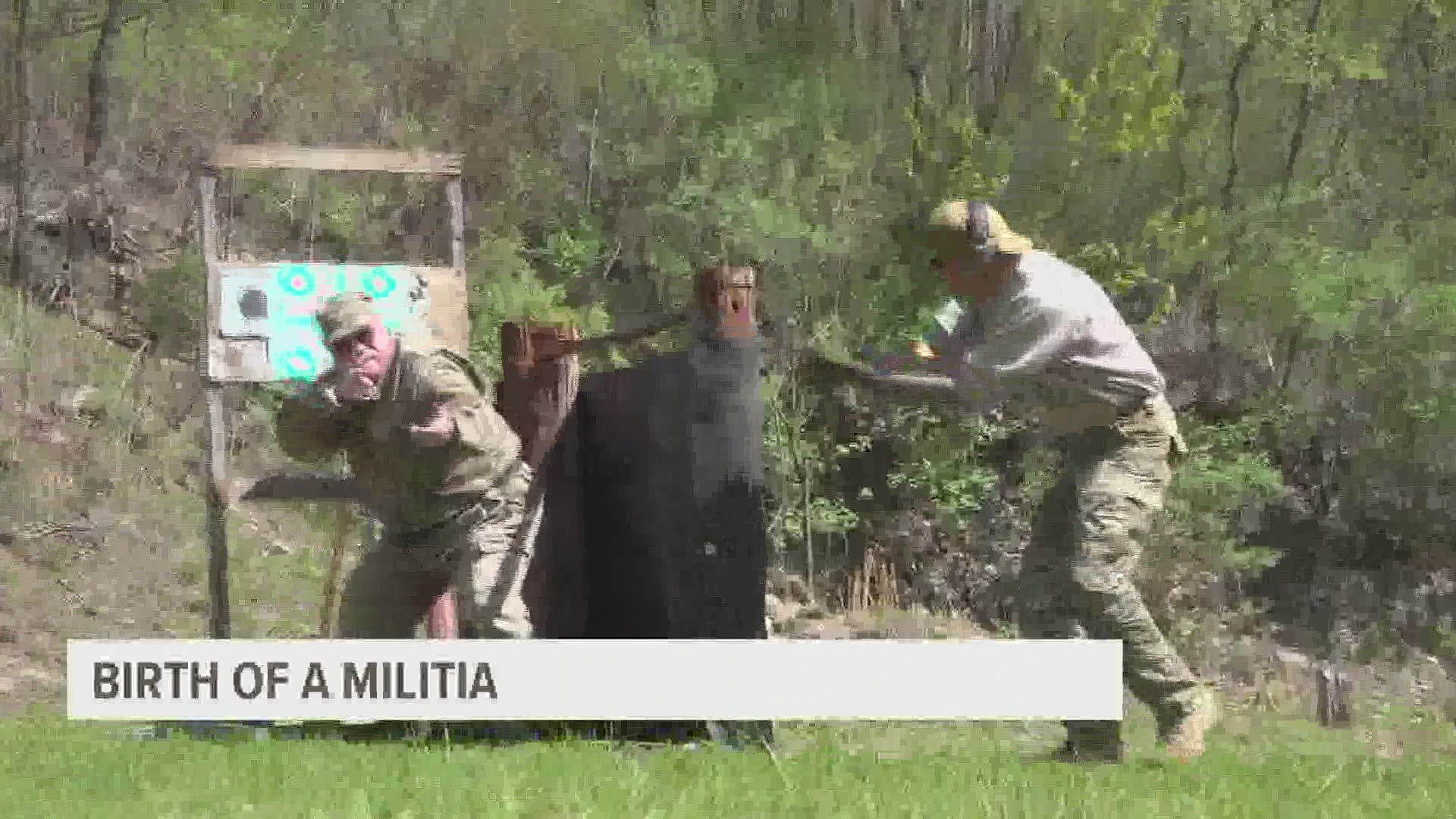 DUNCANSVILLE, Pa. — To keep the peace, they dress for war.

“If you're an average civilian walking down the street and you walk up on me and I'm carrying a battle rifle, I'm carrying seven magazines, a sidearm in military garb. Would you be scared? Damn right, you would. And sometimes that's needed,” said Christian Yingling, founder of the newly-formed Pennsylvania Volunteer Militia. “Not being scared, but not being brazen either.”

Yingling and the Pennsylvania Light Foot Militia were present at the 2017 “Unite the Right” rally in Charlottesville, Va. They were later banned from returning to Chartlottesville, after a court “permanently enjoined [them] from returning to Charlottesville, Virginia, as part of a unit of two or more persons acting in concert while armed with a firearm, weapon, shield, or any item whose purpose is to inflict bodily harm, at any demonstration, rally, protest, or march.”

During the rally, residents and even National Guard members confused Yingling’s Pennsylvania Light Foot Militia men for fellow military, according to court documents.

The similarities between military and militia uniforms aren’t a coincidence, McCausland said.

“Some people find the whole idea of the military appealing to them in terms of, let’s be honest, the regalia, the training and the discipline,” he said.

Nearly one in five defendants charged after the Capitol Riot in Washington, D.C. on Jan. 6, 2021 had served in the military.

“These particular people have the training that you want, use of weaponry, use of explosives. They understand basic tactics, they’re organized, they’re disciplined,” McCausland said. “They’re the kind of member I want.”

Several members of the Pennsylvania Volunteer Militia are veterans. Several others said they felt they were substituting militia service now as a compensation for not having enlisted in the military earlier in life.

“I’ve done a lot for my community, but for my country, no. I never did anything for it,” said militia member Donald Red “Pops” Hustler, Jr.

Yingling served three years in the Navy in the 1990s. He said his military-style training prepared his militia to assist law enforcement.

“Law enforcement a is vastly under-trained,” he said. “These guys need help and we can give them help if they'll let us.”

Yingling and the Pennsylvania Light Foot Militia were also present at the “Defend Our Flag” rally in Gettysburg, Pa. on July 4, 2020.

Yingling claims he worked with Pennsylvania State Police and the Gettysburg Police to protect protesters at that rally.

“The statement regarding Christian Yingling is false. He did not reach out to PSP during the “Defend our Flag” rally in Gettysburg, PA on July 4th, 2020.”

Their statement continued that PSP does not coordinate with militia groups in any manner, though militias sometimes warn them that they plan to come with weapons to an event.

Gettysburg Police Chief Rob Glenny said the Pennsylvania Light Foot Militia did alert police they were coming to the rally, but that police told them, “We aren’t asking for your help, but we can’t prevent you from coming.”

“They’re not helpful at all,” McCausland said. “Most senior military officers would say, ‘We’re not going to conduct an operation with a bunch of, to be candid, amateurs.”

This is the third in a five-part series taking an honest look at the modern militia movement and how the Pennsylvania Volunteer Militia’s vision fits in it. The series will continue May 19 with a look at the role militias have taken on for themselves at protests and rallies, and whether protesters need or want their protection.

RELATED: Birth of a militia: The narrative