Andrew T. Scheid, the owner of a funeral home in Lancaster County, is facing multiple charges after he was found to have not properly cared for four corpses. 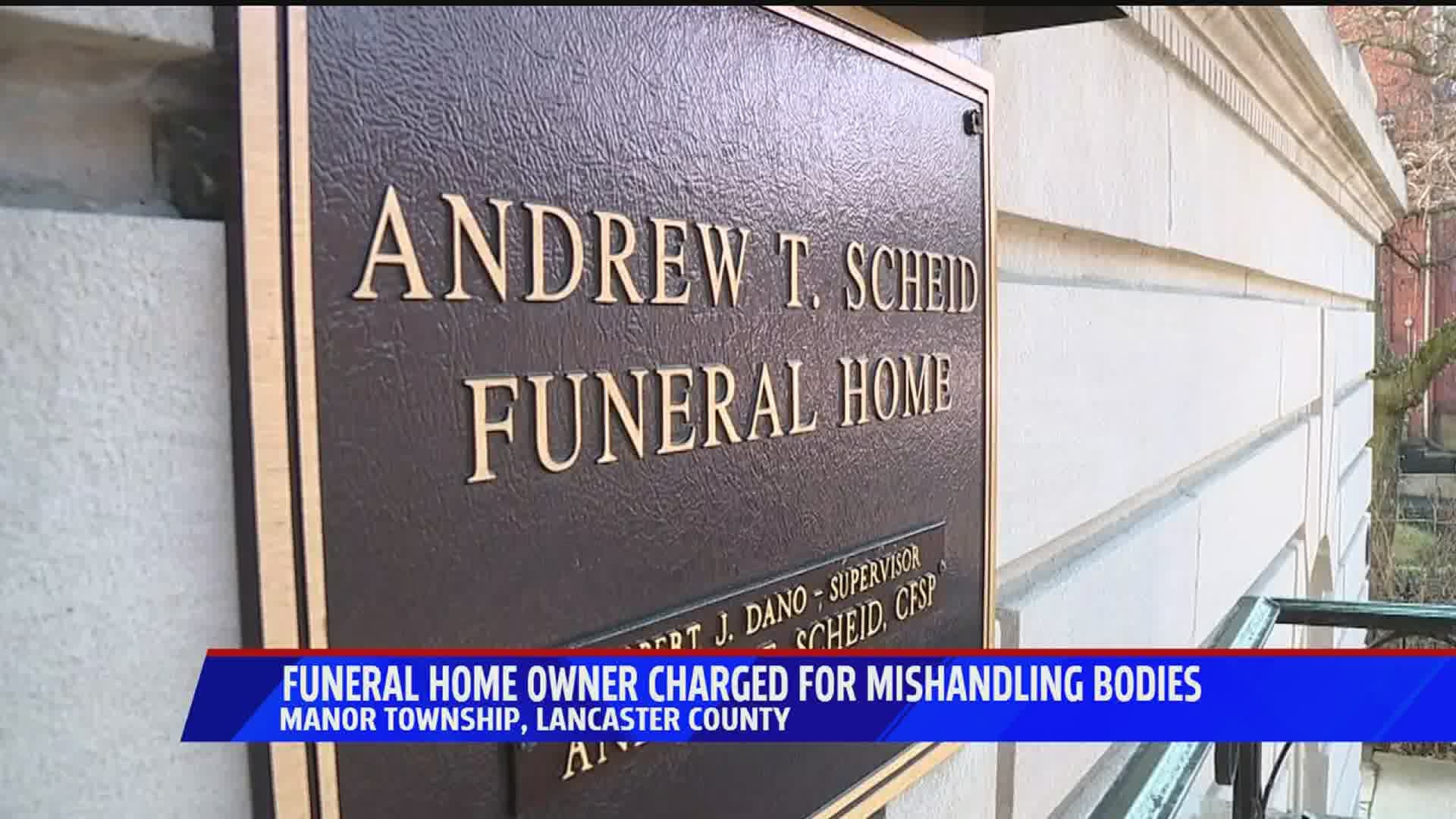 LANCASTER COUNTY, Pa. — The owner of Andrew T. Scheid Funeral Home is facing charges after an investigation revealed tampering with public records and the abuse of four corpses.

Andrew T. Scheid, 49, is facing four felony counts of tampering with public records/information and four misdemeanor counts of abuse of a corpse.

Officials say Scheid's charges stem from December 2019 and January 2020 from his handling of bodies at the funeral home located at 320 Blue Rock Road.

On January 14, four bodies were recovered from the funeral home, and it was discovered they had been there for periods as short as 4 days and as long as 17 days.

Authorities say that during these times, the bodies were not properly cared for, were not embalmed, sealed or refrigerated – as required by the Funeral Director Board regulations – and were found in various, advanced stages of decomposition.

Police also say that Scheid knowingly made false entries on birth certificates that were filed with the Pennsylvania Bureau of Health Statistics.

On those certificates, Scheid knowingly made false entries on death certificates to create the impression that his handling of the remains was in compliance with Pennsylvania State Funeral Board Regulations.

One victim, Charmaine Antonucci, wanted her body to be donated to science, according to her sister Holly Geerdes. Antonucci planned to donate her body to Penn State Health Milton S. Hershey Medical Center for Penn State College of Medicine students’ educational use.

However, Antonucci’s body was left out for four days without embalming or refrigeration, leading to what court documents called “advanced decomposition.”

“Shocked. I really was surprised, especially with her not being refrigerated,” Geerdes said. “It was upsetting.”

Geerdes found a bright side in what happened, though, as the news of what happened to her sister may have helped law enforcement build their case against Scheid.

“I look at this as, It opened the case up and maybe helped a lot of other people that were waiting for help,” Geerdes said.

Charges were filed against Scheid on Thursday morning, and he surrendered at the Manor Township Police Department.

Scheid's funeral director license is suspended indefinitely, but for no less than three years, per an order from the Department of State Bureau of Professional and Occupational Affairs, police say.

“During this investigation we examined dozens of complaints that revealed deficient business practices and poor business etiquette that understandably caused the decedents’ families frustration and further grief. However, it was determined that the conduct did not rise to the level of criminal actions," Adams said.

The lawsuit is seeking to obtain restitution for consumers of Andrew T. Scheid Funeral Home services, after an investigation revealed that he failed to properly care for bodies in his possession, and did not perform essential services that had been paid for, such as cremations or preparations for a funeral.

Scheid also was charged with a misdemeanor count of bad checks.

He is charged with providing a $7,500 check to purchase a burial vault in December 2019 from Evans Eagle Burial Vaults.

Scheid wrote the check with insufficient funds in the attached account, and, after the check returned as insufficient, still did not make good on the payment.