Jake Smucker's baseball card collection is worth tens of thousands of dollars, but the story behind his cards is priceless. 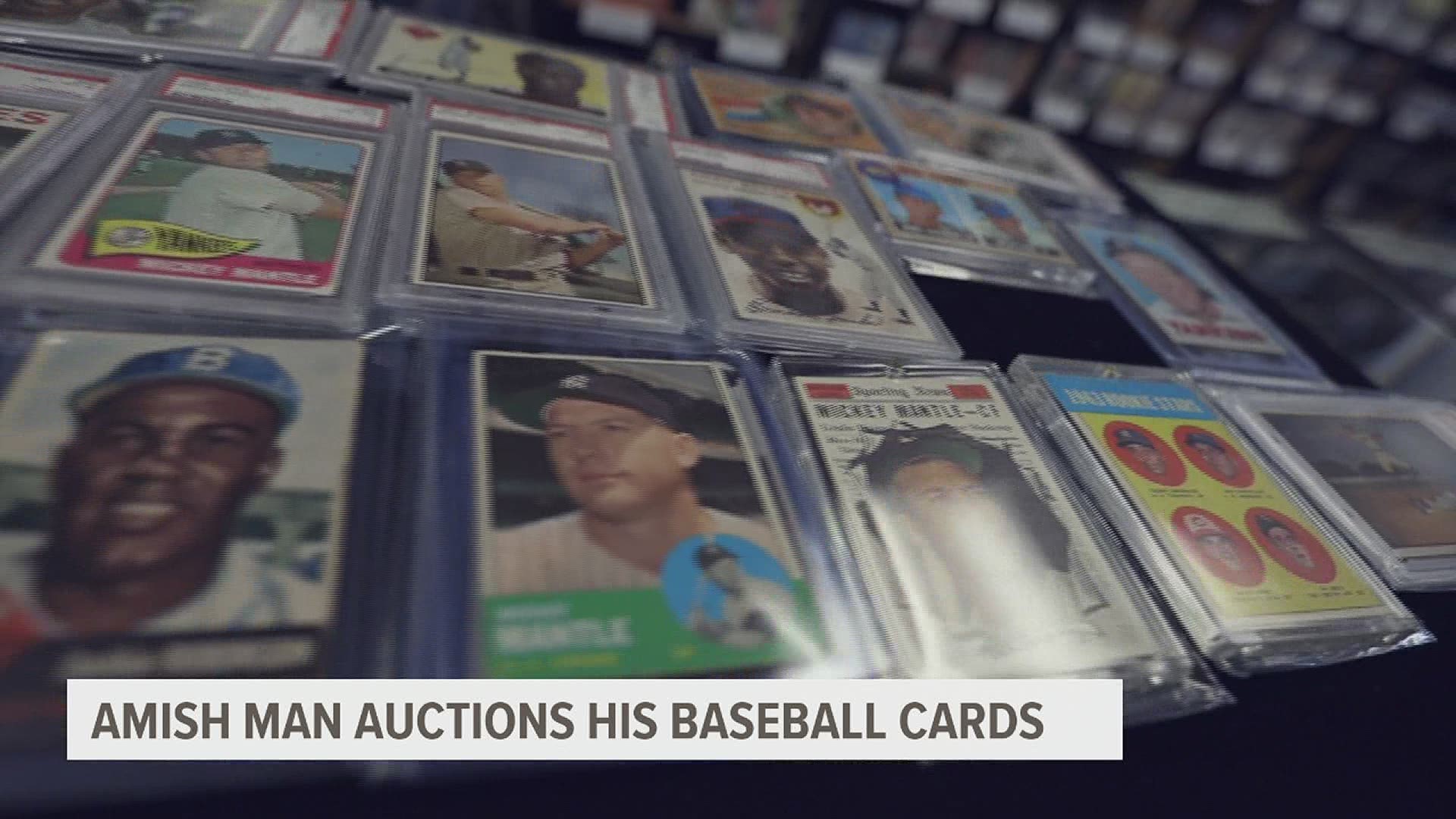 LYKENS, Pa. — Sports trading cards are seeing a historic boom in sales. Card collecting auctions exploded during the pandemic and momentum is not slowing down. The demand for baseball cards is turning old-school hobbies into big business.

Collecting baseball cards was a childhood hobby for Jake Smucker, of Lykens, and his current collection is worth tens of thousands of dollars. However, it’s the story behind his baseball cards that’s priceless.

“When I was a kid, I thought ‘Man, suppose I could be a major leaguer?’” Smucker laughed.

Smucker is 70 years old, wholesome, humble and Amish. Getting him to open up to FOX43 on camera was not easy, but he agreed to share his story as long as we did not show his face. As it turns out, you don’t need to see Smucker to understand his love for the game of baseball: you can hear it in his voice.

“[Sandy] Koufax winding up! And he struck him out!” Smucker exclaimed, reminiscing about Game 7 in the 1965 World Series between the Los Angeles Dodgers and Minnesota Twins.

Smucker fell in love with the Dodgers after the 1963 World Series. He said his school let his class watch the game on black and white TV.

As a boy, he was not allowed to have a radio, but he later snuck one into a chicken house where he took care of 4,000 chickens on the family farm. Smucker never missed a game.

“Sandy Koufax was my hero. I had a little radio up there tucked away and KYW Sports came on in the quarter hour, half hour. I’d run down and make sure I was there and heard what the Dodgers did,” added Smucker. “Those things felt real to me. You could almost smell the dust.”

It wasn’t long before Smucker found a local shop in town and became a baseball card fanatic.

“I used to ride my pony to take pigeons out. I would sell them for a quarter and go up and buy myself some baseball cards. That’s how the collection got started,” Smucker said.

Within a few years, he had built an envious collection. This story almost ends here. When Smucker was 18, he spent a year in Florida and his mom gave his cards away. Life, though, has a funny way of working out. Three decades later, in 2005, a new book of baseball cards was back in his possession.

“I had a popcorn stand at Root’s [Country Market & Auction] and I met this guy out in the parking lot and he had some baseball books. The first page I flipped to, there was Koufax and Mickey Mantle,” he laughed. “It looked like the cards I collected. Unreal. Mickey Mantle and Willie Mays and I couldn’t believe this.”

As a young Amish boy, Jake Smucker snuck a radio into the chicken house on his family's farm and listened to the @Dodgers play. He never missed a game. His childhood hero? Sandy Koufax. https://t.co/lBWLEdHAN2

It was a home run and a new collection was born. Smucker started collecting baseball cards again. Now, at 70 years old, he is turning his childhood dream into stability for his nine kids and 45 grandkids. He’s auctioning off his collection at Wheatland Auction Services in East Lampeter Township.

“He learned about us from the Uncle Jimmy collection, which was probably one of the biggest discoveries in the last couple decades in our industry that happened to come into our business in Lancaster,” said Chuck Whisman, co-owner of Wheatland Auction Services.

Smucker has 32 lots in their May 2021 Sports Card & Memorabilia Auction. The items are anticipated to sell for more than $20,000. The auction is open for bidding until 7:00 p.m. on May 23. The auction house has never been busier.

“The sports card market is probably the hottest that it’s ever been,” said Stacey Whisman, co-owner of Wheatland Auction Services. “We’re so excited to help him bring these cards to market to really help him highlight them.”

You might wonder how someone can part with a collection that embodies a lifelong passion. For Smucker, the answer is simple.

“It just brought a little more spice to life, but it’s not something that I can take anywhere with me when I'm gone. So that’s the most important thing to me—my family,” said Smucker.

Family comes first, but home plate is where the heart is.

“If I could have any surviving members of the ‘65-67 team from the Dodgers, autograph baseball or card, it’d be an honor for me. Sandy Koufax, especially,” Smucker told us.

It would be one card or baseball that Smucker would never sell. Instead, it would remain a family keepsake: something for his children, his grandchildren and, hopefully, even his great-grandchildren to always remember him by.

“History left back for my family. Is that crazy? I guess, but I don’t think so,” Smucker said.