Concerns range from what one lawyer says is a lack of attention on mental abuse to county children and youth agencies being structured differently across the state. 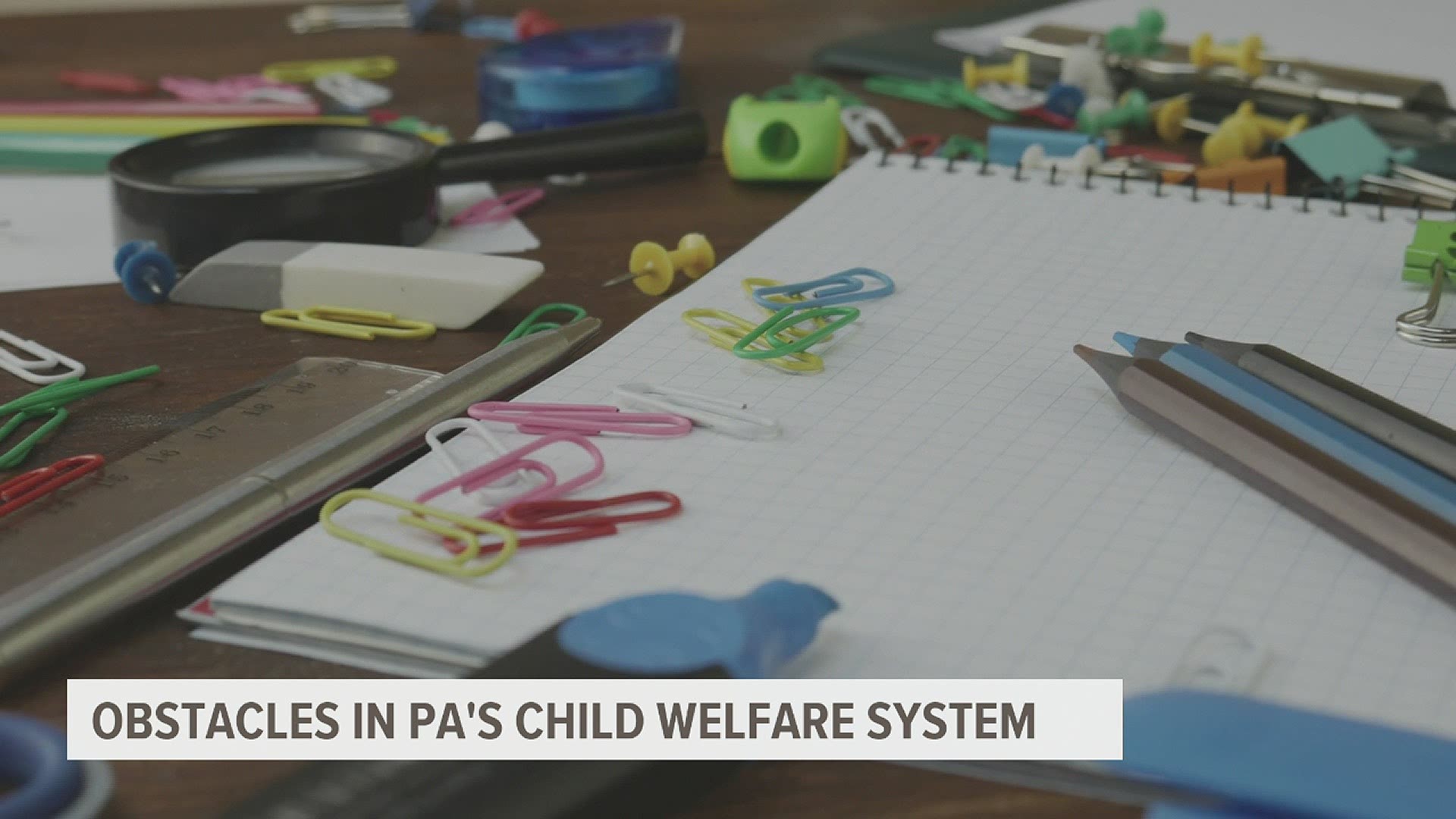 PENNSYLVANIA, USA — Those who work within the child welfare system in Pennsylvania say there are challenges. The current system is mostly county-administered with some state oversight.

FOX43's Grace Griffaton spoke with attorneys and advocates about the biggest obstacles they see.

"The most challenging thing is working within the system," Nicole Mulholland, who oversees Pressley Ridge's Community Resident Rehabilitation program said. "It's hard because you work with probation. You work with children and youth. In the state of Pennsylvania, we're a county-run Children and Youth state so there are 67 ways to do things."

Mulholland says some counties place children into foster homes much quicker than other counties.

"We have counties that stopped drug testing. We have some counties who if the parents have shown up for a drug visit, and they're under the influence, they'll stop the visit, and other counties who will allow the visit to continue," she explained.

"Everything from: how do you screen a call that comes in? How do you supervise cases? The reality is very different and can be very different from county to county," Cathleen Palm, the founder of the Center for Children's Justice, explained.

Palm has 25 years working to improve systems that intersect with the lives of children and families.

"Could one county be fine, and another is overwhelmed?" FOX43's Grace Griffaton asked.

Palm likes to compare the system to how schools are funded. Palm notes how some schools with higher taxes have more programs for students. It's similar for the child welfare system. All counties have the basics; some counties just have more supplemental resources. Though, it's not just resources that can vary.

"Your tolerance of a parent's substance use may be very different from my tolerance," Palm said. "You might be like 'Oh, she's just using this drug; that's okay. Oh, she's a white woman living in suburban, Dauphin County. She's okay,' versus, 'She's living in Allison Hill, Harrisburg.' That's the challenge. It's so subjective. It's filled with bias. It's filled with our own personal experience."

For family law attorney Wendy Chan, it's not how things are viewed but what she says isn't addressed enough.

"We had a teenage girl once who was so distraught by how her mother was treating her that she would hurt herself intentionally. Cutting, and we're not talking about cutting on your arms because you're trying to get attention, she was cutting on the upper part of her thigh so no one could see it," Chan said.

Chan believes the mental anguish some children experience by the people meant to protect them can be overlooked. Mental abuse is included in the Child Protective Services Law:

Serious mental injury is defined as: a psychological condition, as diagnosed by a physician or licensed psychologist, including the refusal of appropriate treatment, that:

(1)  renders a child chronically and severely anxious, agitated, depressed, socially withdrawn, psychotic or in reasonable fear that the child's life or safety is threatened; or

(2)  seriously interferes with a child's ability to accomplish age-appropriate developmental and social tasks.

"It seems like not everybody is aware that mental abuse is part of our Child Protective Services Law," Chan said. "You think broken bones, death, or feeding them bleach or something like that, you don't think someone beating down a child mentally, emotionally by bullying them daily."

The issues are complex, and advocates acknowledge they cannot be solved with the snap of a finger or with one organization for that matter.

"So many people think a call to Children and Youth... it does kind of have a fairy godmother approach like 'wave the magic wand, and things are gotten to,'" Palm said.

Palm says the priority for everyone needs to become prevention: stopping abuse before it becomes a possibility.

"We have to sincerely say, 'We can prevent child fatalities.' I think we almost accept it, 'Yeah, kids are going to die,'" she said. "In my mind, it's about how you value children to begin with. Every child...it should be the commitment of the Commonwealth that every child hits their first birthday. Every baby gets a birthday card on their first birthday."

According to Jon Rubin, the deputy secretary for Pa. Children, Youth, and Families, prevention is becoming the priority.

"We certainly are trying to shift our system to be more preventative in nature," Rubin told FOX43 via Zoom.

"Are we looking at emotional abuse as part of the abuse when children suffer?" Rubin said. "Certainly, our workers are trained and are looking for children with anxiousness, fear, chronic mental health conditions."

Caseworkers are trained, but Rubin says they are limited by the Child Protective Services Law.

"Our caseworkers cannot make a determination of emotional abuse without a licensed psychologist or psychiatrist," he said. "I think the most important thing is the work we are doing to support the child once we become aware of it and trying to prevent it from happening moving forward and trying to get the child the supports they need."

While case workers decisions may seem subjective, Rubin says they're made based on the same guiding principles, which can be viewed here.

"The best interest, safety, health and well-being of a child, and how do we keep them connected with their family," he noted.

Counties can have different resources and structures based on the local need, but all case workers receive the same training: 120-hours minimum in the field and in the classroom. Every year, they receive an additional 20 hours of training depending on the type of work they pursue.

The Department of Human Services (DHS) encourages all Pennsylvanians to report suspected child abuse or neglect to ChildLine, the commonwealth’s 24/7 hotline for anyone concerned about the safety or well-being of a child. To report a concern, call 1-800-932-0313.

Pennsylvanians can learn more about the signs of potential abuse at www.dhs.pa.gov/keepkidssafe.

DHS also encourages parents and families who are struggling to cope during this time of crisis to reach out for help. Anyone struggling with mental health and in need of referrals to helpful programs can call Pennsylvania’s Support & Referral Helpline, which is operated 24/7 by skilled caseworkers who can provide emotional support during this difficult period. The number to call is 1-855-284-2494. For TTY, dial 724-631-5600.

Another helpful resource is the 2-1-1 hotline operated by the United Way, which can connect people and families to local resources that can help during the public health crisis.