"They're just kicking us to the curb": 6 Families Ordered Out Of Homes By Local VFW

Tenants express concern that the notice came as the nation remains in a pandemic. The VFW has given them 90 days to vacate. 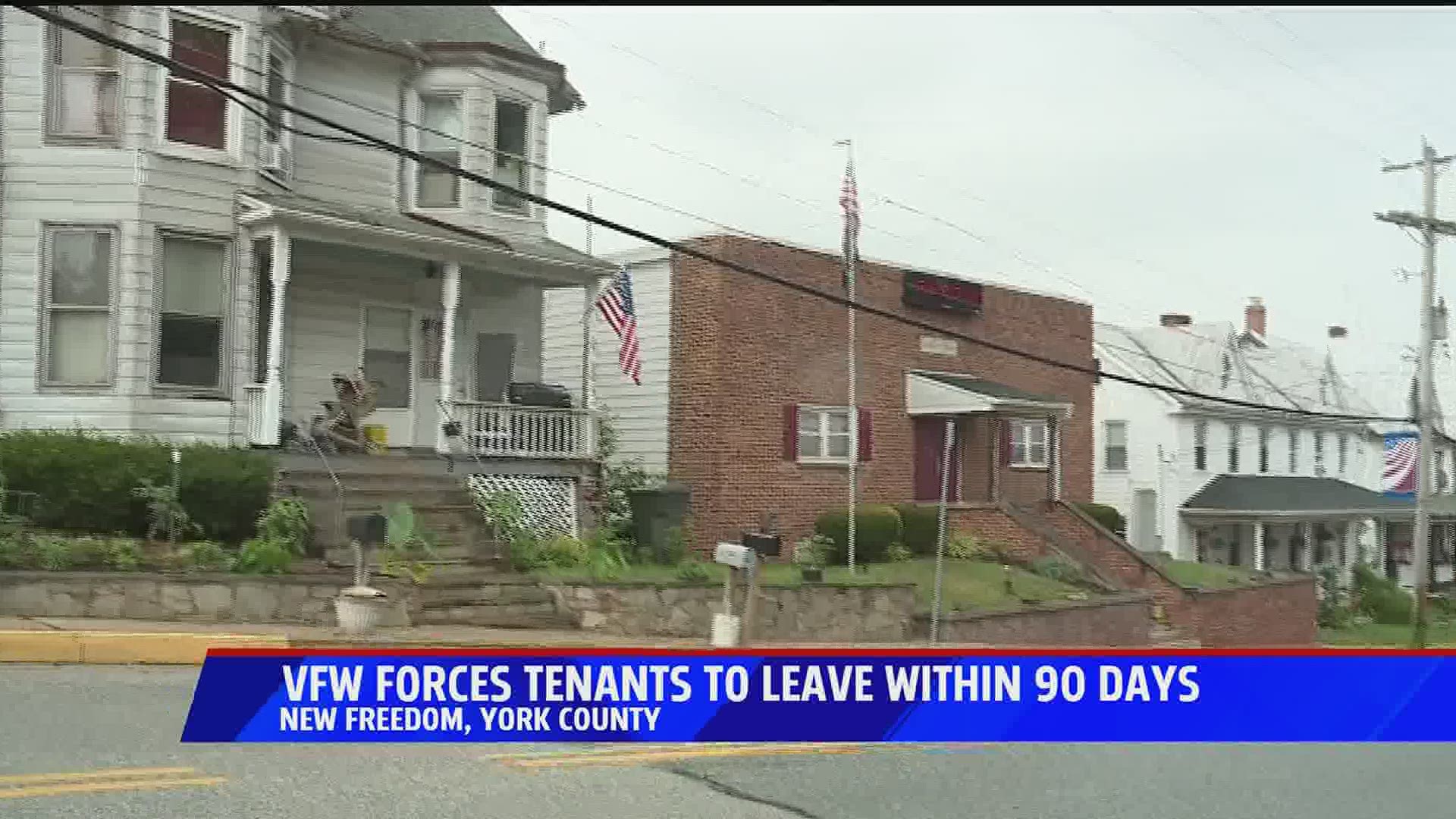 Six families are trying to figure out where their next home will be after they learned the Veterans of Foreign War Post 7012 is ordering them to vacate within 90 days in New Freedom.

"They're just going to kick us all out during a worldwide pandemic. I just don't agree with that," said Dominique Svatey, who used to work for the VFW and who now lives in one of the three buildings impacted along West Main and North Third.

"They're just kicking us to the curb," she said.

VFW 7012 commander, Captain John Smith, said he too has a heavy heart about the decision and that it was difficult to make during a pandemic. But, he said "the sole purpose behind this is to keep our post from going belly up."

"The pandemic has affected me a lot," said Junior Wilson, who is another tenant who will have to find a new home with his three children, ages 12, 5, and 2. He has lived in his current property for a year and a half. "I was laid off in March and I still haven't yet been called back."

Brittany Jones, who once worked at the VFW, will also be forced to pick up and go. Jones is a bartender who just started working again after she had to collect unemployment during the pandemic. She said she already had to dip into her savings to support her and her 3 children.

"Us together as neighbors, we just decided we need to stand against them. It wasn't right what they're doing," she said. She added her downstairs neighbor was also recently diagnosed with cancer and is worried her health will not be good enough to move out.

Smith said, as with many organizations during the COVID-19 pandemic, the VFW is also struggling financially and the idea of getting rid of the rental properties has been an idea that has been talked about for nearly 10 years.

"They talked about it for years, but they never really did anything or said anything about it," said Svatey, who said the VFW also never attempted to raise their rent instead of ordering them out.

Svatey lives with her mother and says she is 'heartbroken.' She was saving up to buy a house. But now, the order has forced her to start searching for a new home sooner than she had planned.

"The VFW, just like most businesses is in terrible shape," Smith said. "The Post is being drained for all kinds of stuff. You do know the houses that we have, we pay taxes on them because they're part of the home association, not the Post. So, we pay taxes, school tax, property tax, and the borough taxes."

Smith said that tax burden was the main reason for the VFW's decision. He said rent collection is not covering enough of the costs and the properties are old and in need of repairs. He said the Post is also not a money-making entity. Therefore, the Post plans to end the rentals and reclaim the land as part of the Post itself in order to end the tax burden.

Smith said he realizes people are being displaced. But, he stressed he wants to make sure the Post survives and is able to contribute to the community for years to come, saying "we want to save the Post."

"It was myself and one other person who voted against (the decision) and it was I believe 12 other people who voted for it," said Kyle Hopkins, VFW member and Chaplain, who is now helping the tenants as they plan a protest August 15.

"At the meeting, one of the issues that was brought up was the fact that they no longer wanted to be in the 'landlord business' if you will," said Hopkins.

The Governor's moratorium on evictions ends August 31st. The VFW isn't ordering the residents to leave until October. So, Hopkins admits, the VFW has a 'legal right.' However, he said, it comes done to the 'moral right.'

The tenants FOX43 spoke to claim they were paying rent on time. The VFW would not comment on that issue.

"It really saddens me that an organization that counts on its surrounding community to keep them alive and afloat, for them to turn their back on the community when they're in a position to help members of that community," said Hopkins.