Lancaster man charged in 2010 arson and murder of his wife

LANCASTER, Pa. — A Lancaster man has been charged in the 2010 arson death of his wife. In a Thursday news conference, police announced they arrested Carlo... 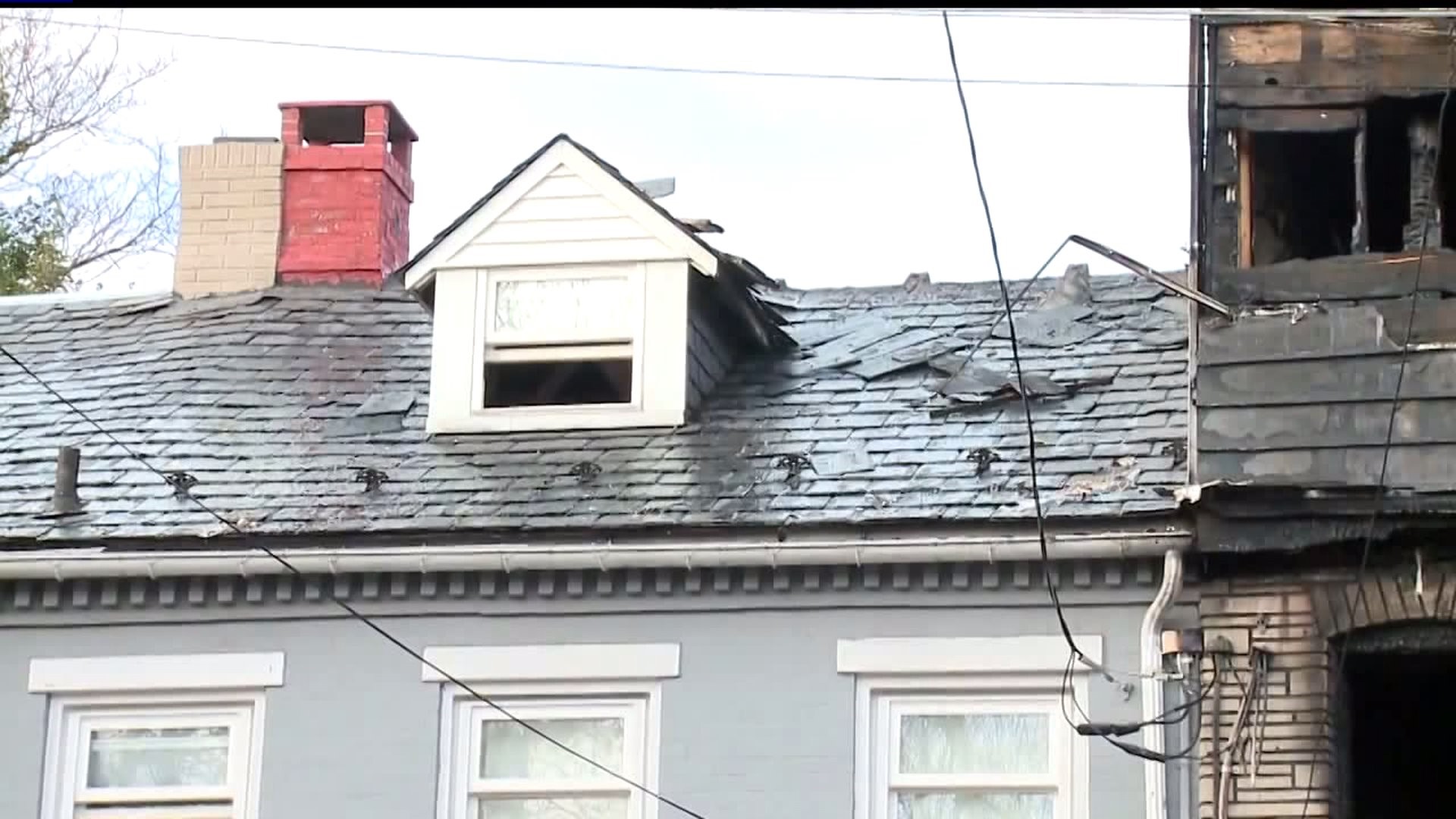 LANCASTER, Pa. -- A Lancaster man has been charged in the 2010 arson death of his wife.

According to police, Montalvo-Rivera was married to Olga Sanchez-Reyes, when she was killed in a house fire on December 6, 2010.

Sanchez-Reyes' three children, who were 8, 9, and 13-years-old  were in the North Plum Street house at the time of the arson, police say.

They managed to escape the fire by climbing onto the roof of the home, according to police. One of the children fell from the roof, sustaining a fractured arm when she struck the railing of the front porch.

The other two children were helped off the roof by a neighbor. One of them sustained severe burns to her arms because she was hanging from a the ledge of a window as flames shot out of it, according to police.

Detectives interviewed Montalvo-Rivera shortly after first responders arrived at the fire, the criminal complaint states. Montalvo-Rivera was at Lancaster General Hospital with the three children at the time of the interview, according to the complaint.

Through an interpreter, Montalvo-Rivera told police he was asleep on the morning of Dec. 6, 2010 and was awakened by the sound of his wife arguing with a man with a scorpion tattoo on the side of his neck, the complaint states. He claimed he was then hit in the head and lost consciousness, and while he was knocked out someone tied his hands behind his back, police say.

Montalvo-Rivera claimed that when he regained consciousness, the home was already on fire, forcing him to jump out of a second-floor window to escape. He told police he did not know how he got his hands untied.

Police say prior to interviewing Montalvo-Rivera for the first time, they spoke to a neighbor who was among the first to arrive at the burning home. The neighbor told police he called 911 after discovering the fire, and saw the child who had fallen from the roof and broken her arm, the complaint states. The neighbor said he returned to his home to get a sweater for the girl, and after giving it to her he heard the sounds of banging and scraping coming from behind the home, according to the complaint.

About a minute later, the neighbor told police, he saw Montalvo-Rivera walk out from behind the home. He noted Montalvo-Rivera's hands were tied behind his back, the complaint states. The neighbor said he and several others attempted to remove the bindings, which he described as shoe laces, but were unable to because Montalvo-Rivera was bound so tightly.

In a second interview with police on the night of December 6, 2010, Montalvo-Rivera allegedly gave the police an account similar to the one he had provided earlier in the day. He claimed that when he heard his wife arguing, he attempted to get out of bed, but was struck in the head by an unknown assailant and knocked unconscious for about 45 minutes. When he woke up, Montalvo-Rivera claimed, he was lying face-down at the foot of his bed with his hands tied behind his back. The bedroom was full of smoke, he claimed. He allegedly told police he managed to free his hands, climb out of the window, and leap to the ground. He then heard his children yelling, and attempted to get back in the house from the front.

Montalvo-Rivera told police he and his wife were happily married and denied having any marital problems in the second interview, the complaint states.

Two weeks after the fire, police say, Montalvo-Rivera and detectives walked through the remains of the home, while Montalvo-Rivera showed them where he claimed to have been knocked unconscious. He showed police the window he claimed to have jumped from, and this time claimed that his hands were still tied when he leaped to the ground -- contradicting the account provided by the neighbor on the day of the fire, according to the complaint.

Police say photos of the scene taken on the day of the fire showed that the window Montalvo-Rivera claimed to have jumped from was closed. Police say a detective noted the windows were of a newer variety, and that if they had been opened, they would need to be manually closed. The window being closed in photos indicated that no one had jumped from it, police said in the complaint.

Police say they interviewed Montalvo-Rivera again after the walkthrough and confronted him with inconsistencies in his account, telling him witnesses at the scene testified that his hands had been tied behind his back when he was on the ground, but that he had initially claimed that he had freed himself prior to jumping from the window.

Police say Montalvo-Rivera could not provide an answer for why he was seen tied up when he was at the front of his house, according to the complaint. In the same interview, police say, Montalvo-Rivera allegedly admitted that he and Sanchez-Reyes were having marital problems and that she was seeing another man. He told police he did not tell them this earlier because he "did not want the family to find out," the complaint states.

In a third interview on Dec. 17, 2010, Montalvo-Rivera allegedly changed his story, telling police he had lied during previous interviews and claiming he had not untied his hands while still inside the home. He also claimed he had jumped from a different window, and that his hands were actually still tied when he got to the front of the home.

Police say the cause of the fire was ruled an arson in December 2010, and an autopsy of Sanchez-Reyes indicated her cause of death was asphyxia, smoke inhalation and thermal burns, the complaint states. Her manner of death was ruled a homicide.

Montalvo-Rivera testified before a grand jury on Feb. 9, 2013, the complaint states. He allegedly altered his story again during his testimony, claiming this time that he jumped from the window with his hands bound, but that his hands had been "loosened" while he was still inside the home.

This account still contradicted accounts given by witnesses, who told police Montalvo-Rivera's hands had been "tightly" bound when he was found in front of the home, police say.

On Oct. 1, 2016, police interviewed Montalvo-Rivera again. This time, police say, he claimed his hands were tied in front of his body, but stated he was not sure of how they were tied or what had happened because he had been knocked unconscious. He also claimed that Sanchez-Reyes did not want to divorce him, and that they had gotten along well.

Over the course of their investigation, police say, detectives learned Montalvo-Rivera had moved out of the home he shared with Sanchez-Reyes one month before the fire.

On Oct. 10, 2016, police say they spoke to Dolores Ojedo, the sister of the victim. Ojedo claimed that about a year before the fire, she witnessed an argument between her sister and Montalvo-Rivera, in which he allegedly told his wife "I will kill you like a dog," the complaint states. Ojedo claimed Montalvo-Rivera was a "very jealous man," and that her sister told her several times she and her husband were not getting along.

On Sept. 25 of this year, police say, they interviewed a neurologist who examined Montalvo-Rivera's medical records. The neurologist told police Montalvo-Rivera's account of being knocked out for 45 minutes did not match the physical injuries described in the records, and that if someone were to be knocked unconscious for that long, they would have suffered a severe traumatic brain injury. The neurologist told police that based on the lack of symptoms exhibited by Montalvo-Rivera, his version of what had happened was "highly unlikely," the complaint says.

“The medical science is not backing up what the defendant is claiming that he had been knocked out for 45 minutes which is an excessively long time for a significant head injury," said Stedman.

Police say they obtained surveillance footage from the Lancaster Community Safety Coalition on the day of the fire, and were unable to locate anyone entering or leaving the home prior to the fire -- or even walking in the vicinity, according to the complaint. Police say "Mondalvo-(Rivera's) account of this group of males entering the residence...for the purpose of murdering his wife is not corroborated by any video surveillance evidence or any other evidence, for that matter."

In summation, police say in the complaint, "throughout this nine-year investigation, time and time again the facts have lead (sic) investigators back to Carlos Montalvo as the only person who possessed a motive and the opportunity to murder Olga Sanchez....(He) changed his version of the facts of how his hands were tied verses untied to investigators on four separate occasions."

Police also pointed out in the complaint the inconsistency in Montalvo-Rivera's account regarding his claim that he jumped through a closed window, that he and his wife were happily married, and that he displayed no symptoms of a head injury on Dec. 6 and that his medical records were not consistent with that of someone who had been knocked unconscious for 45 minutes.

The evidence collected by police over the course of the nine-year investigation led them to filing charges against Mondalvo-Rivera.