HARRISBURG, Pa. — The day before the one year anniversary of the deadliest attack on their people in American history, Jews did what they do every Saturda... 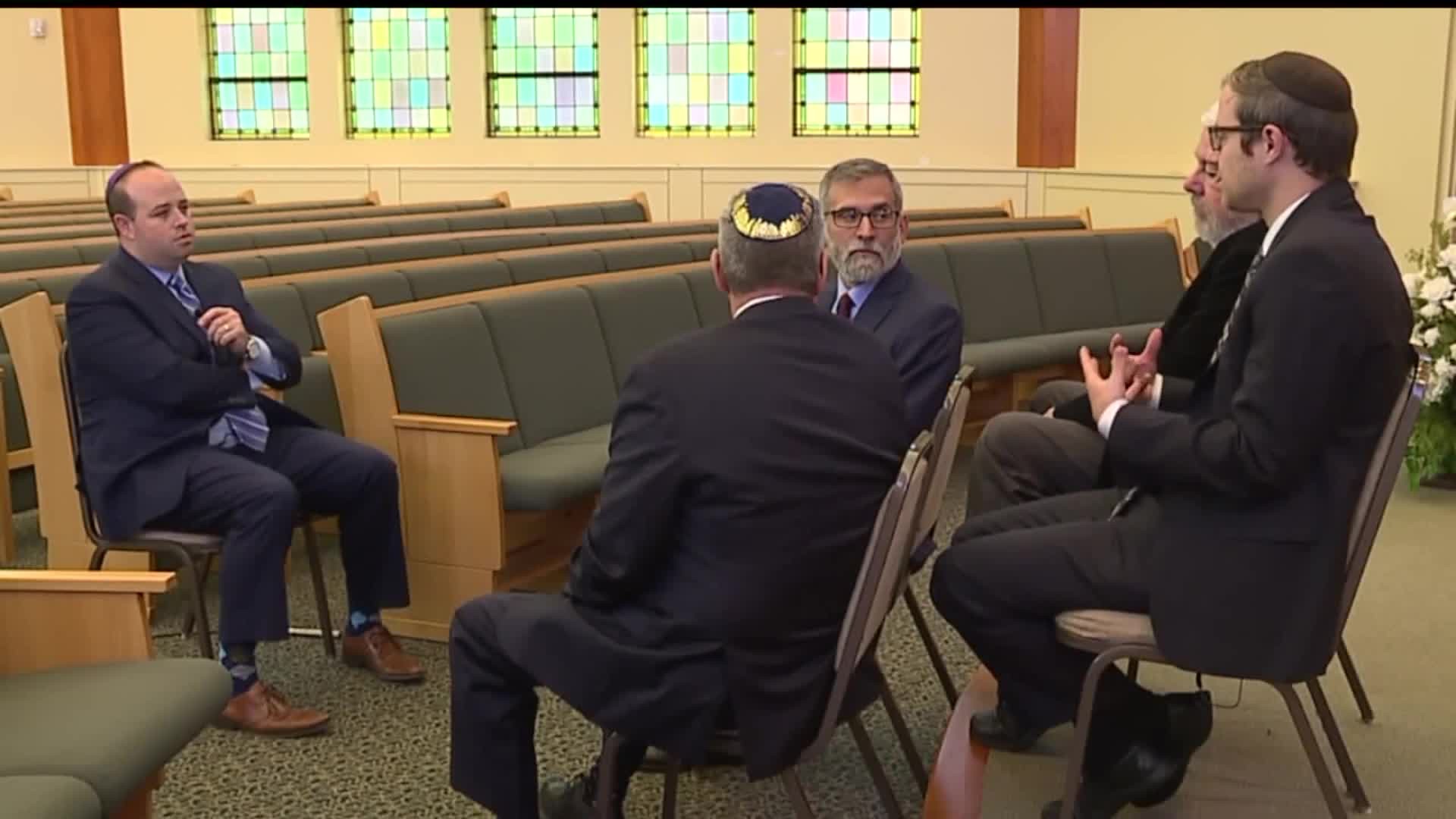 HARRISBURG, Pa. -- The day before the one year anniversary of the deadliest attack on their people in American history, Jews did what they do every Saturday. They went to synagogue and prayed.

The shooting at the Tree of Life Congregation in Pittsburgh on October 27, 2018 still resonates with Jews across the country. People went to synagogue just like they did every Saturday. A shooter walked in and murdered 11 Jews in three different congregations. According to police reports, the 46-year-old man who frequented neo-Nazi and white supremacist social media sites, told officers after he was arrested, "They [Jews] are committing genocide to my people. I just want to kill Jews."

Prosecutors are seeking the death penalty against him.

One year later, the after-effects of the mass shooting is still felt in Jewish communities across the country, including the Harrisburg area, where rabbis in the area's four main congregations continue to have conversations about safety and security.

"I think our congregation has always been safe," says Rabbi Peter Kessler of Ohev Shalom Congregation. "I think people are more vigilant now."

Kessler, along with Rabbi Eric Cytryn of Temple Beth El, Rabbi Ron Muroff of Chisuk Emuna Congregation, and Rabbi Elisha Friedman of Kesher Israel Congregation all agree the shootings in Pittsburgh have brought their Jewish community closer together. Getting to that point, however, has not been easy.

According to the Anti-Defamation League, attacks on Jews are among the highest rate since the ADL starting tracking anti-Semitism in the 1970s. They audited 1,879 anti-Semitic incidents in 2018 and 57 attacks on individuals. Those numbers are the third highest total in nearly 50 years. The number of individual attacks in 2018 nearly tripled 2017's total of 21.

The data does not include the shooting which occurred at a Chabad synagogue in Poway, California, where one person was killed and three more were injured in a shooting in April 2019.

"Some people anticipate that October 27, 2019 will somehow represent closure for those families for that community," said Rabbi Muroff. "My sense having spent time [in Pittsburgh] and staying in touch with some of those families [after the shooting] is that it is an open wound."

These rabbis know their congregants may feel more tense since the shootings. When asked why this shooting was different than the hundreds of other mass shootings which take place across the country, Rabbi Kessler was quick to point out, "Jews have been made the scapegoat for thousands of years, because of ignorance, anti-Semitism."

How does one fight anti-Semitism. Rabbi Muroff believes its Jews' responsibility to not only call out hate, but be a unifying force behind creating a better society.

"I think part of the reason why there is anti-Semitism is because we don`t know people," Muroff said. "It`s incumbent on all of us to get to know each other better."

Kessler agrees, suggesting there should be more synagogues build nationwide to help educate people within communities.

Rabbi Cytryn added, "The time to build a coalition is now. The time is not after the attack happens but before so that there’s a support system in place."

Security has been increased around local synagogues, although this was done so long before the Tree of Life shootings. Cameras surveil inside and out of the synagogues. Guards are often seen during weekend services. Sometimes, though, added security isn't enough. State Representative Dan Frankel, a Democrat who represents the Pittsburgh neighborhood of Squirrel Hill where the shootings happened, has been working on legislation for months which would strengthen the state's hate crime laws.

"When a specific group is targeted like my Jewish community it brings another dimension into that in terms of trying to intimidate a group of people," Frankel said.

Frankel's series of bills include legislation which would increase penalties for hate crimes and give police and law enforcement better training on how to spot a potential hate crime before it occurs.

"There’s no way to prevent hatred; it will always be there," Frankel said. "This should let people know that their government is addressing an issue that will help them be safer, that will help them address the issue of hatred in our communities, and that we're doing something about it."

In the last few weeks, Jews throughout the world celebrated some of their holiest holidays. Rosh Hashana (the Jewish New Year), Yom Kippur (Day of Atonement), the harvest holiday of Sukkot, and Simchat Torah, when the Jewish scriptures start anew with the Book of Genesis, bring Jewish families and their communities together. In many cases, rabbinic leaders used this time to remind their congregants that the way to combat hate is to love instead.

"All human beings are created in God's image," Rabbi Cytryn said. "Our mission in [the Book of] Leviticus is love your neighbor as yourself.  No exceptions."

It's a necessary reminder. As Jews today struggle with increased anti-Semitism around them, rabbis want to remind the public that their local Jewish population isn't different from themselves.

"We might worship in a certain way that is different than other people in this country, but the way we live our lives as people is fairly similar," Rabbi Elisha Friedman said.