Robocalls: All the rage

Robocalls are the number one complaint to the Federal Trade Commission and Federal Communications Commission. Pennsylvanians are some of the top targets. 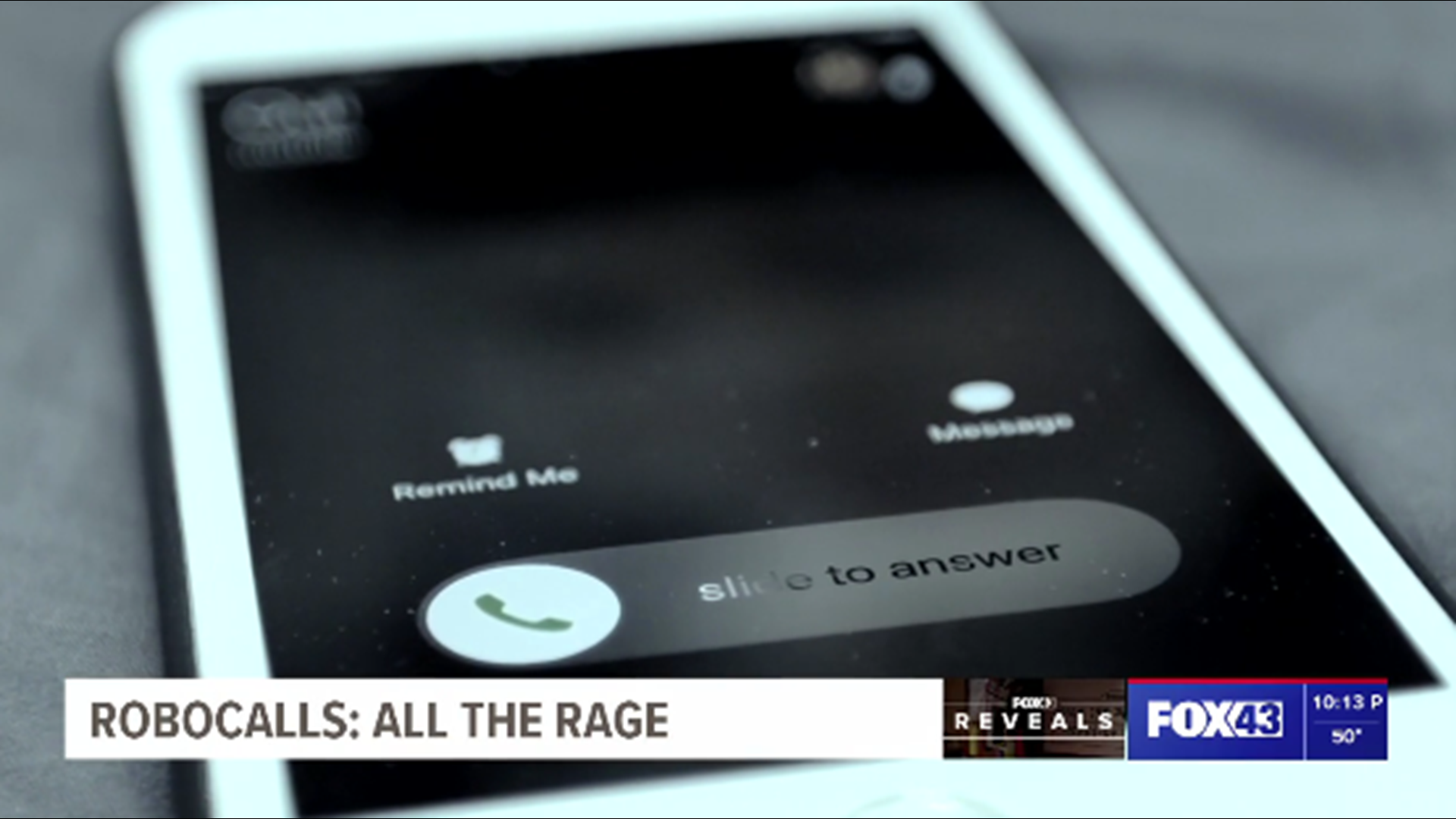 HARRISBURG, Pa. — Pennsylvania is among the top ten states in the nation for getting the most robocalls. It’s a problem everyone finds annoying and just won’t seem to go away.

Scammers are now using technology to find numbers of people or places you know and use those as caller ID. FOX43 Reveals why the phone won’t stop ringing—even if you’re on the Do Not Call list.

Robocalls are the number one complaint to the Federal Trade Commission (FTC) and Federal Communications Commission (FCC). Pennsylvanians are some of the top targets.

There were 1.6 billion robocalls placed in the Commonwealth in 2020. Recently, there has been a dramatic spike in calls. In March 2021, 171 million robocalls were placed in Pennsylvania—about 5.5 million every single day.

Kelly Hirneisen, of Steelton, gets all types of robocalls at least twice a day. She said they even call her 14-year-old daughter.

"One is your auto warranty is about to expire. Another says your social security number is being suspended," Hirneisen said. "If it's a real person, I will tell them 'Take me off your list, I’m done. Take me off this list. You’re not to be contacting me.'"

The problem is Hirneisen is already on the Do Not Call list. However, she isn't the only one still getting a barrage of robocalls.

In March, the FTC received 19,346 Do Not Call (DNC) complaints from Pennsylvanians. Perry County filed the most number of DNC complaints per 100,000 people.

The Do Not Call registry is designed to stop sales calls from companies that follow the law. Some scammers see the list as a directory of phone numbers they now know are active.

“Having a Do Not Call list and having a rule that says you can't make a pre-recorded call, does not physically stop that from happening just in the same way that theft is illegal and theft still occurs even though there are substantial enforcement efforts,” said Will Maxson, assistant director of the FTC’s Division of Marketing Practices.

PA is among the top 10 states in the nation for getting the most robocalls. In March alone, 171 million robocalls were placed in PA—about 5.5 million every single day. TONIGHT at 10:00 #FOX43Reveals why the phone won’t stop ringing, even if you’re on the Do Not Call list. @fox43 pic.twitter.com/i5m1IELRSp

Consider two people we’ll call Mark and Patsy. You might not fall for that robocall, but Mark and Patsy tend to live up to their names. The problem is, in a country with millions and millions of phone numbers, their numbers amount to a pair of needles in a haystack of needles.

It all makes the search for them a game of chance. Not long ago the rules were simple: one quarter, one pull, one call. Now, automation turns one pull every ten seconds into 10,000 calls every second—stacking the deck against you in a game where the odds are no longer in your favor.

“When I say millions, I'm not understating. It is millions of people a day, millions of phone numbers a day and if you just get a .01 percent rate of people that start to take that message seriously and of those, if just one percent of those progressed to the next step, it might be one in a million, but if you get a couple of those a day, you've scored pretty big and the phone bill for that is hundreds of dollars,” explained Michael Self, a telephone technology expert and former robocaller.

Lancaster is one of the top cities impacted by robocalls in Pennsylvania. In April alone, 19.6 million robocalls were placed in the Red Rose City.

RELATED: FOX43 Finds Out: You have a right to cash in on some political calls and messages