Why the government can't stop robocalls 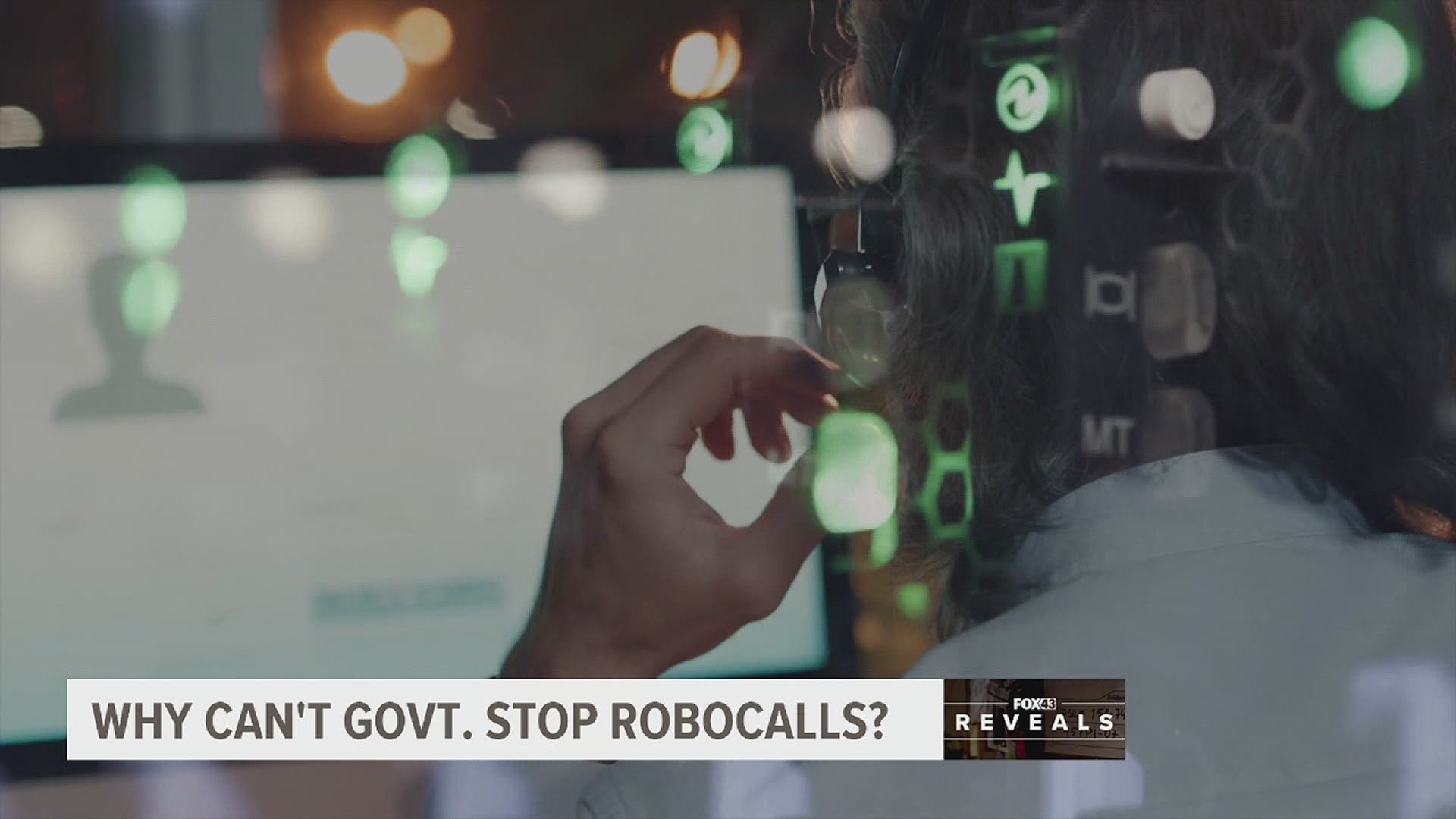 HARRISBURG, Pa. — There’s a resounding agreement among state and federal lawmakers to put an end to robocalls. Multiple agencies are cracking down and more call blocking products are on the market. Yet, Pennsylvanians tried to dodge nearly 160 million robocalls in April alone. FOX43 Reveals why we are still dealing with the endless barrage of robocalls.

Nationwide, Americans received 4.4 billion robocalls in the month of April. According to YouMail, a company that develops robocall blocking software, 23 percent of robocalls are alerts, 12 percent are payment reminders, 24 percent are telemarketing and 41 percent are scams—proving robocalls have metastasized into a serious threat.

“Yeah it’s a cancer, there’s no question about it,” said Michael Self, a telephone technology expert and reformed robocaller.

Self said some scammers see the Do Not Call list as a directory of phone numbers they now know are active.

“This is a list of a lot of people who don't want to be called and now aren't being called, so they're more ripe for the picking because they're getting far fewer calls a day,” Self added. “And practically, it is unenforceable at the Federal Trade Commission or Federal Communications Commission level. The FTC and FCC have regulatory power, but they just don't have the tools to enforce the information needed to do enforcement.”

Even people in the office of the FTC working to crack down on robocalls admit they will not go away overnight. However, the FTC is stepping up enforcement efforts to trace and stop robocalls.

“It requires essentially a subpoena, or what we call a civil investigative demand, asking for information to the carrier that the consumer seemed to call on and then they would tell us, okay, this carrier handed us this call, and so you'd send a subpoena to them and you'd have to essentially piecemeal work your way back through the network to the originator,” explained Will Maxson, assistant director of the FTC’s Division of Marketing Practices. “With the partnership with USTelecom, that has helped speed that up. The industry has helped essentially cut out some of the middlemen in that process of tracing those calls back.”

TONIGHT at 10: Though the @FTC has stepped up enforcement efforts, #FOX43Reveals why we are still dealing with the endless barrage of robocalls. @fox43 pic.twitter.com/W1VmegpiDC

The FTC can fight robocallers by issuing fines of up to $43,000 per call, but the agency often settles for a fraction of the price. The overwhelming majority of robocallers may never get caught.

“Our jurisdiction doesn't end at the borders, but you are correct that a big part of the problem is that a lot of the fraudsters are located overseas in countries where we can't easily access them for criminal prosecution through our Department of Justice or through FTC cases to enforce our civil judgments,” said Ian Barlow, attorney with the FTC Bureau of Consumer Protection.

“[Robocallers] are going to get through so the best thing to protect yourself is to be aware, be skeptical,” Self suggested.

Congress requires phone companies to flag robocalls, but scammers are outsmarting the law.

Click here to do a reverse search of a number that is popping up on your phone to find out if it is from a known robocaller.

FOX43 Reveals issues that affect you and your family to keep you informed. Do you have a story you want us to investigate? Send us an email to FOX43reveals@FOX43.com.

RELATED: Robocalls: All the rage