FOX43 Reveals: New programs emerge to correct past mistakes after Pa. families missed out on millions in rent relief

LANCASTER, Pa. — Pennsylvania had an unusual problem in 2020. It had $150 million in emergency funds for rent relief—and a whole lot of trouble spending it. FOX43 Reveals what happened to all of that money and how some county agencies are now creating their own programs for rental assistance.

Boxes of paperwork and applications from the state’s previous rent relief program once flooded offices at the Lancaster County Housing and Redevelopment Authorities. Staff scrambled to get the money into tenants’ hands before a statewide deadline.

This time around, a countywide program will set the parameters for rental assistance in Lancaster County. It is one of 18 counties in Pennsylvania to receive direct federal funding for rent relief, giving them the ability to create their own locally-driven programs.

“We know our community the best. We know the needs in our community. We have the partnerships and relationships to be able to put this money out much more efficiently and effectively,” said County Commissioner Ray D’Agostino.

Lancaster County received $16.2 million dollars from the federal government for rent relief and is expecting more aid from the state. The program is on track to launch online applications March 1, pending guidelines from the U.S. Treasury Department. The program’s start date could be delayed if those guidelines are not released in about a week or two.

Lancaster County is one of 18 counties in PA to receive direct federal funding for rental assistance, giving them the ability to create a locally-driven program to help tenants pay rent and utilities. Tentative launch date is March 1. @fox43 pic.twitter.com/22wg64UIbD

Eligible households must meet three criteria, including a 10 percent or higher reduction in income or incurred significant costs due to the COVID-19 pandemic. Online applications can remove language barriers and tenants can receive help for rent arrears, utilities or future rent payments for up to 12 months.

“It doesn’t have to be consecutive months. We could actually provide an additional three months to maintain housing stability, make sure they’re not evicted or ending up on the street and homeless,” said Justin Eby, Deputy Executive Director of the Lancaster County Housing and Redevelopment Authorities. 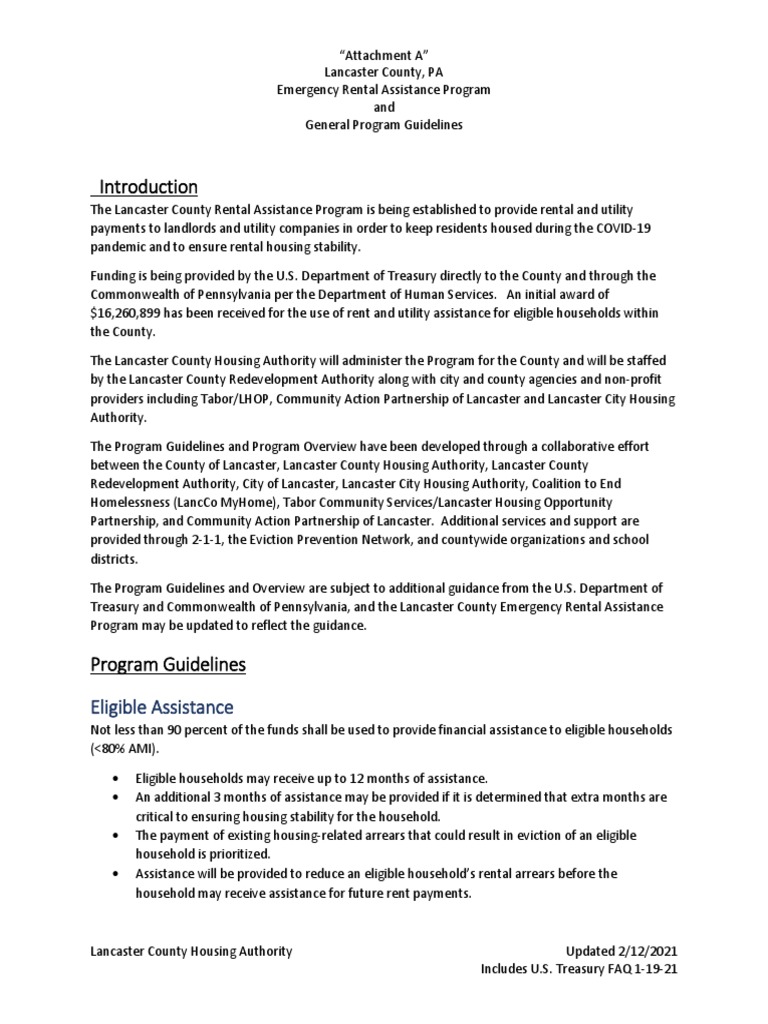 Lancaster County Emergency Rental Assistance Plan and General Guidelines | Section 8 (Housing) | Landlord
The Program Guidelines and Overview are subject to additional guidance from the U.S. Department ofTreasury and Commonwealth of Pennsylvania, and the Lancaster County Emergency Rental AssistanceProgram may be updated to reflect the guidance. Program Guidelines Eligible AssistanceNot less than 90 percent of the funds shall be used to provide financial assistance to eligible households(<80% AMI).

The county-run program has no monthly cap on rent, eliminating a problem that plagued the state’s initiative in 2020. The state-created program would only cover $750 a month in rent, preventing many landlords from participating.

“The state program was a one size fits all in many instances,” said Commissioner D’Agostino. “What the rent is in Philadelphia or Pittsburg or Scranton is not as the same as here in Lancaster. We’ll be able to pay what the going rent is to get people caught up.”

Landlords will not have to sign on in order for tenants to be eligible for payments through the county’s program. If the Housing Authority cannot get ahold of landlords or utility companies, they will make the payments directly to eligible tenants, Eby said.

Landlord cooperation was a huge deterrent in the previous state-run program. Thousands of applications were denied because they did not have a landlord's signature. An organization called Make the Road PA said that’s how one mother was evicted—despite the moratorium.

“She went ahead and took the decision to apply for the rent relief. The landlord didn’t do her part. She just refused to fill out her side of the rent relief form and told her that you have to leave because she didn’t pay rent. So days before Christmas she was without anywhere to go,” explained Armando Jimenez-Carbarin from Make the Road PA.

Out of the 46,282 tenants who applied for rental assistance through the state’s program last year, only 16,515 received the funding. The problem wasn’t that the state ran out of money for rent relief—spending it, was the hard part.

The Pennsylvania Housing Finance Agency (PHFA) had a November 30 deadline to distribute $150 million dollars in CARES Act funding. The application process was onerous. Many applicants struggled to find the proper income documentation and PHFA staff were flooded with calls and emails within a short timeframe.

“Our days were crazy trying to help the counties. We were trying to get them more money so that they could get money out to tenants. They were just going nuts trying to get enough documentation to be able to make the assistance available and prove assistance was justified. It was chaos,” said Bryce Maretzki, Director of Policy and Planning at PHFA.

Soon, time ran out. By the deadline, only one-third of the money—$54 million—went to households in need. The rest of the funding—about $96 million—was transferred to the State Department of Corrections to meet payroll expenses, after a last-minute vote by state lawmakers. The U.S. Treasury Department said state legislatures could reallocate the federal funds as long as they went to public safety entities.

“If it had not been used, it would have gone back to Washington, D.C. for something else," said Senator Scott Martin, a republican who represents Lancaster County. "Here, at least it went to offset the massive hole we had in our budget from the state because that impacts whether or not we have to raise taxes on everybody in Pennsylvania, which we’re fighting desperately not to do."

Now, Pennsylvania has nearly $570 million in new federal aid for a second round of rent relief—more than triple the amount of last year’s program. The Department of Humans Services is currently building the Emergency Rental Assistance Program (ERAP), but plans to use a centralized, single online COMPASS application for all counties. Paper applications will also be available and DHS will be translating the paper application into four additional languages.

There is no set monthly cap on rent in the new relief program and households may be eligible for up to 12 months of assistance, a DHS spokesperson told FOX43 Reveals.

DHS and counties will work collectively to minimize the amount of administrative costs to maximize the funds available to the community, a department spokesperson said in an email, adding that DHS is making every effort to keep program administration requirements as minimal as possible while maintaining compliance, integrity, and accountability to federal and state law.

The Department of Human Services worked with the General Assembly to design the new program with the challenges of the previous model in mind. Their goal is to officially launch applications for ERAP in mid-March.

Adams, Mifflin, Juniata, Perry, Franklin and Lebanon counties will have to use the state-create program for rent relief. York, Dauphin, Cumberland and Lancaster counties are creating their own programs with direct federal aid. County leaders are vowing to ensure their programs get the money where it is needed most.

“It may not be just rent. People are scrambling to pay bills, to be able to keep a roof over their head,” added Commissioner D’Agostino. “We’ll be able to meet their needs far better with this program thanks to the direct federal relief.”

FOX43 reveals issues that affect you and your family to keep you informed. Do you have a story you want us to investigate? Send us a confidential email at FOX43reveals@FOX43.com.

RELATED: FOX43 Reveals: Why you should test your home for radon