Rebuilding the ground that feeds us | FOX43 Reveals

Soil depletion and erosion is threatening the future of our food supply, but it's not too late. 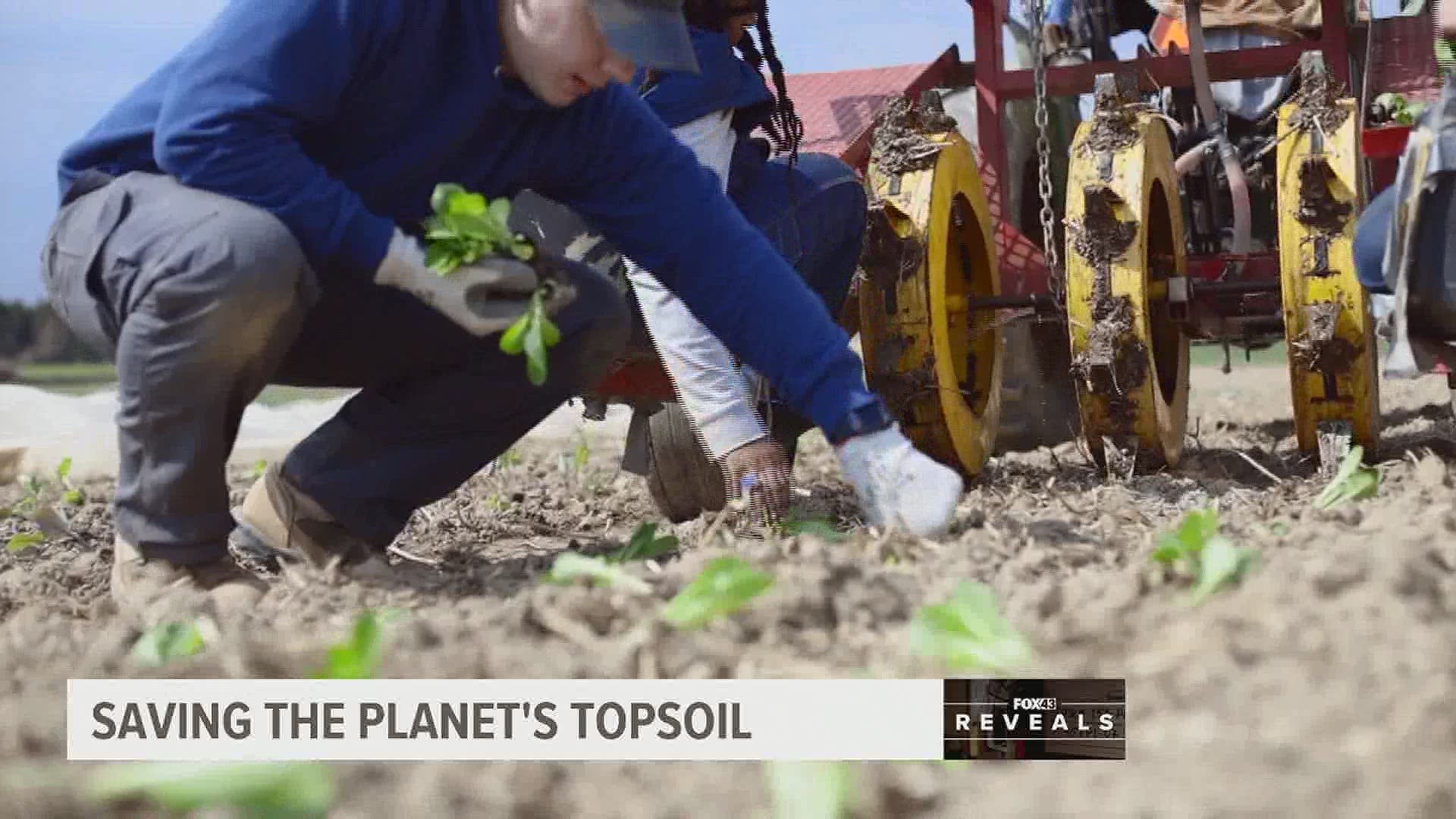 KUTZTOWN, Pa. — Soil depletion and erosion is creating immense challenges for farmers across the country. The world could run out of topsoil in about 60 years, according to a global study by the Food and Agriculture Organization of the United Nations, threatening the future of our food supply. However, it's not too late.

FOX43 Reveals why many local farmers are turning to regenerative agriculture as a solution to this complex problem. Some scientists believe this method of farming has the potential to combat the climate crisis and preserve the planet.

“We are seeing soil depletion at rates unlike any other time in human history,” said Jeff Tkach, Chief Impact Officer at Rodale.

The idea behind regenerative organic agriculture is that it works with nature to rebuild the very ground that feeds us. Farming techniques include minimal or no tilling of soil, rotating crops, planting cover crops to benefit the soil after the main crop is harvested, and greater use of compost rather than chemical fertilizers.

Researchers at the Rodale Institute said regenerative organic systems use 45 percent less energy and release 40 percent fewer carbon emissions. How is that possible? It all starts with the soil.

“We believe that healthy soil equals healthy people,” Tkach said. “A farmer’s goal, their number one goal every day that they wake up, is asking themselves the question how can I improve the health of my soil.”

FOX43 Reveals why more farmers are turning to this unconventional method. Cover crops and compost put nutrients back into the soil, helping plants naturally fight off disease. It also incorporates biodiversity. Livestock, like chickens and pigs, go to work in a portion of pasture, tilling the land as they graze.

“Last year, we were planting crops like corn, and other vegetable crops were growing right on this very land, and now you can see we’re rotating the animals through,” Tkach explained about a research field that is examining rotational grazing with chickens and pigs. “They’re going through and they’re picking everything that was left behind so the soil’s getting healthier, the animals are getting healthier, and we’re putting nutrients back into the soil.”

Visiting the @RodaleInstitute farm to learn more about regenerative organic agriculture. Researchers say the key to a viable future is buried in the earth’s soil. #FOX43Reveals pic.twitter.com/xCQ4QX7GzW

Rachel Yonkunas: How does this have an impact on climate change?

Jeff Tkach: We can actually use farmland, agricultural land, in the United States to sequester carbon emissions. If you think about the photosynthesis process, plants are literally eating, they’re inhaling carbon dioxide and guess what? That carbon gets stored in the soil where it belongs. That actually can solve many of our carbon emissions challenges in the United States and around the world.

Transitioning from conventional farming to organic agriculture can be unpredictable, which makes it difficult for farmers to get the money to sustain production. Banks are risk averse and want to know that a farmer is going to yield the same amount of crops every year. It’s reasons like this why farmers need better access to you—the consumer.

This is where retailers, like GIANT, play a role. The GIANT company recently announced a partnership with Rodale to support farmer training and education, opening channels between farmers and the communities they feed.

“We want to do our part and as we were having conversations with the business and partners, Rodale just kept coming up,” said Jessica Groves, social impact manager at GIANT. “We have the power to use those channels responsibly to share the knowledge that we have gained through Rodale Institute.”

The partnership expands upon GIANT’s other commitments to support clean energy and reduce food waste. The GIANT Company recently opened a seven-acre pollinator-friendly solar field at its corporate headquarters in Carlisle, Cumberland County. The initiative provides an opportunity to educate team members, customers and the community about the crucial role bees play in getting food onto their family’s tables.

“We need to have a planet that we can hand off to our children. We need to figure out how to make more things, responsibly, and the work that Rodale is doing is teaching that,” Groves added.

Soil depletion and erosion pose a serious threat to the future of our food supply, but it’s not too late. #FOX43Reveals why many local farmers are turning to regenerative organic agriculture as a solution to this complex problem, SUNDAY at 10:00pm on @fox43 pic.twitter.com/Y7F2MA6bQ7

Rodale Institute is currently helping 125 farms in Pennsylvania transition from conventional methods to organic agriculture. It is part of their newly formed organic crop consultancy that offers free technical assistance to any farm in the state that wishes to transition. It helps to link farmers to the market and give them access to long-term contracts with retailers, like GIANT.

RELATED: Americans waste a lot of food. Here's what can be done | FOX43 Reveals