Megan’s Law does not restrict where a registered sex offender can live once he or she completes parole or probation—and that includes near schools and daycares. 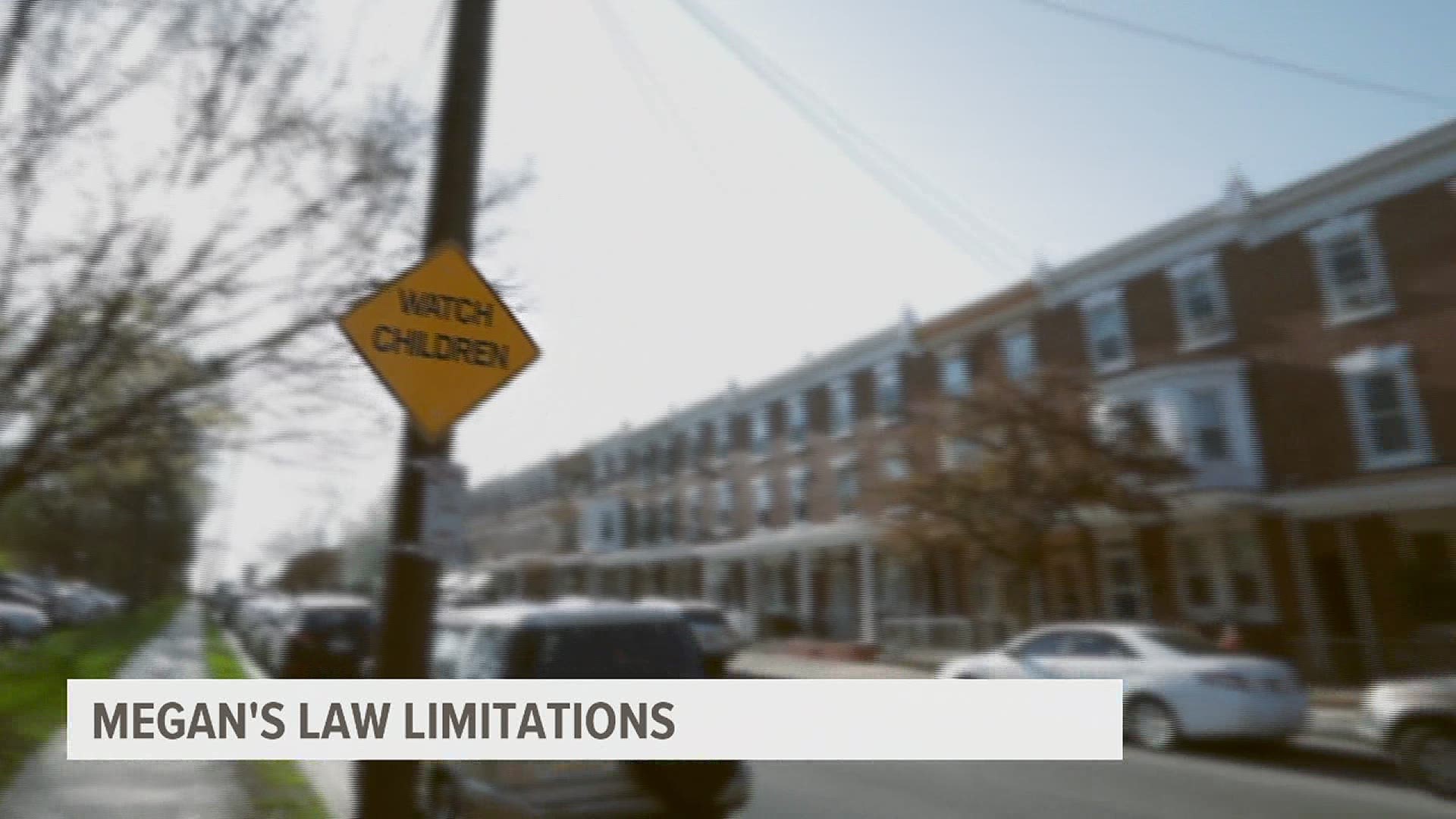 HARRISBURG, Pa. — Most registered sex offenders are well within their rights to live close to a school or daycare—and many do. FOX43 Reveals how often it is happening and what protections are in place to stop repeat offenders.

Each month, daycare supervisor Karla Rivero gets a new batch of mugshots of registered sex offenders that live near her work: Busy Bees Child Care Center in Lancaster.

“If I could tell you the amount of papers we receive in a month, it’s ridiculous,” Rivero said.

Megan’s Law does not restrict where a registered sex offender can live once he or she completes parole or probation, including near daycares or schools.

“It’s definitely uncomfortable and very alarming simply because we can’t control it,” added Rivero. “We have no way of fighting it.”

FOX43 Reveals that 25 registered sex offenders live within a half mile of Busy Bees Child Care and 76 are living with a one-mile radius of the center. Daycare providers, like Rivero, said they want better protections for their facilities.

“There’s people that change. I’m not saying that’s not possible, but we do know that there are people who relapse and are capable of, you know, committing this crime again. So definitely we would want to know more information other than a picture and how many miles away they are,” said Rivero.

In February, Shymar Mcbride of Harrisburg was charged with raping a teenage girl. The 43-year-old had been on the sex offender registry since 2007 after being convicted of involuntary deviate sexual intercourse in 2002.

Also earlier this year, Paul Woolery, of Manor Township, was charged with sexually assaulting a child at a home one block from where he lived. The 50-year-old Lancaster County man had been a registered sex offender in Pennsylvania since 2013 after a previous sexual abuse conviction in 2000.

Some people argue these cases are outliers.

Child care workers say they feel unprotected under the current law, which allows registered sex offenders to live near schools and daycares. #FOX43Reveals what protections are in place to stop repeat offenders, TOMORROW at 10:00pm on @fox43 pic.twitter.com/BCKGQfJZbs

“When [people] hear registered sexual offender, then they don’t hear anything else,” said Vicki Henry, president of Women Against Registry (W.A.R.).

W.A.R. works to abolish Sex Offender Registries and remove the stigma around what they believe is a misunderstood subset of society. Henry said many people are on the registry for low-risk, non-violent offenses and often do not get the kind of help they need.

For Henry, this fight is personal. Her son was convicted of possessing child pornography while he was serving in the military overseas. A psychologist uncovered he had been sexually abused as a child by his father during weekend and summer visits, Henry said. She is now fighting to secure a path back to society for those convicted of a sex crime.

“Some of the reasons that people fail is because we put so many roadblocks in their way. People need three things to succeed. They need a job, a place to live and a positive support system,” Henry said.

Jim Willshier from the Pennsylvania Coalition Against Rape (PCAR) believes education and awareness can be more impactful than any law.

Rachel Yonkunas: Are there enough protections in place to prevent repeat offenders?

Jim Willshier: That’s hard to answer. I don’t know if Megan’s Law is able to do that in itself.

PCAR works to end sexual violence and advocates for the rights and needs of all sexual assault victims. The organizations partners with a network of rape crisis programs to bring help, hope, and healing around issues of sexual violence to the Commonwealth of Pennsylvania and beyond. PCAR created a program called Safe Secure Kids to help families start conversations about preventing and recognizing child sexual abuse.

“The more we talk about it, not to normalize the behavior, but to normalize the conversation that we have a role to play and can work together to keep the community safer, especially for the benefit of children and for supporting all survivors, that’s probably the best thing that can be done,” Willshier said.

Rivero feels all she can do is educate and communicate with families and their children about respect and consent to prevent sexual abuse and harassment. She and other daycare providers will continue to raise the alarm until they feel heard.

“It’s not talked about enough that’s why I’m glad you guys are actually doing this because there’s a lot of people out here that don’t know so it’s scary,” Rivero said.

FOX43 Reveals issues that affect you and your family to keep you informed. Do you have a story you want us to investigate? Send us a confidential email at FOX43reveals@FOX43.com