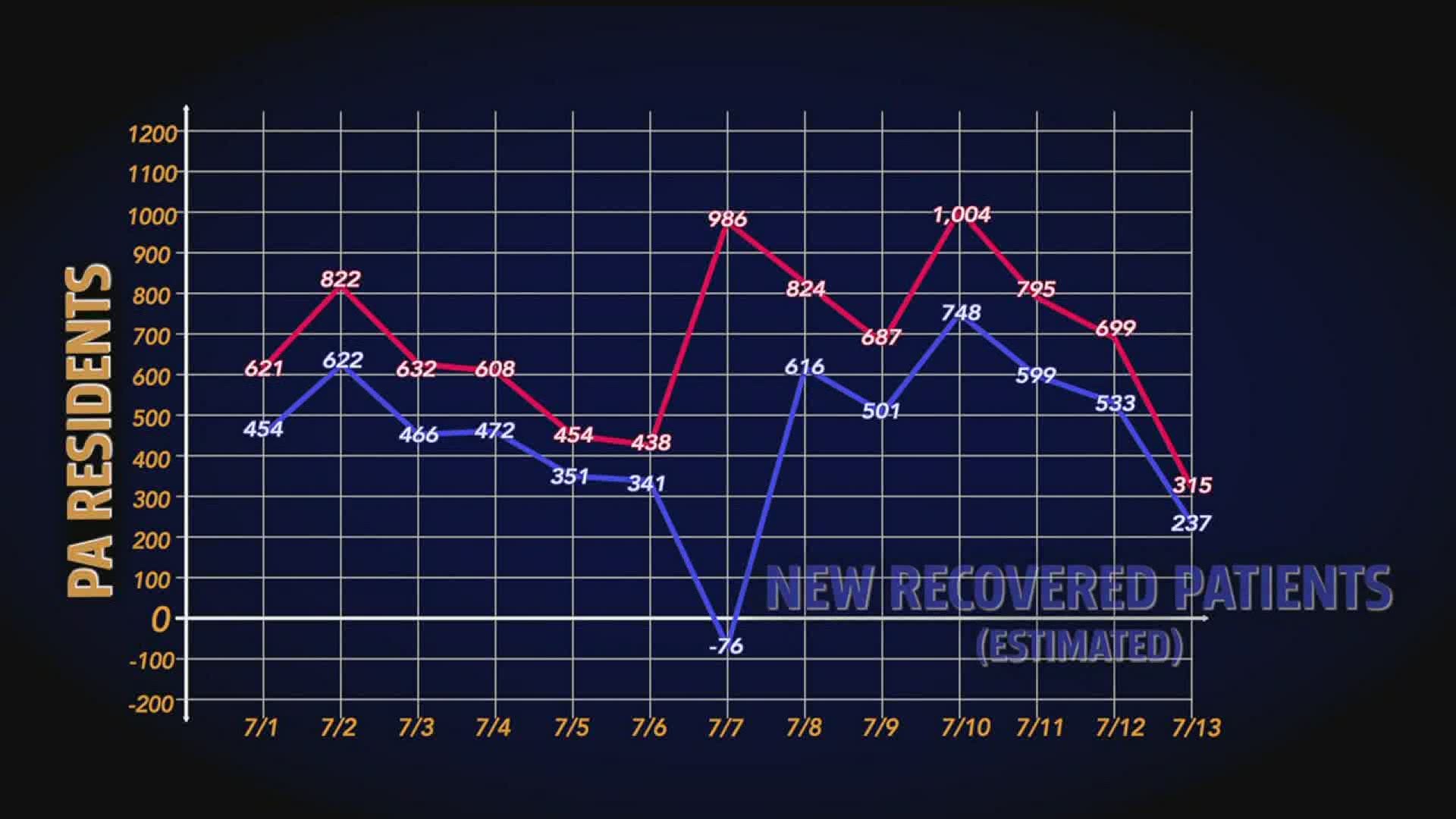 HARRISBURG, Pa. — From infection rates, to confirmed and probable cases, it can be difficult to understand the data surrounding the COVID-19 pandemic in Pennsylvania.

FOX43 Reveals an extensive look at the number of new COVID-19 infections statewide and how they compare with the estimated number of patients who have recovered.

As of July 13, there have been 93,015 confirmed cases of COVID-19 throughout the Commonwealth since the start of the outbreak, according to the Pennsylvania Department of Health (DOH). This number includes 6,911 deaths, but does not include probable cases.

The burning question: how many Pennsylvanians are confirmed to have the virus right now? FOX43 Reveals takes a look at the number of patients who have recovered.

At start of pandemic, we saw a higher number of cases in people ages 19-49, before it spread to those over age 65. This pattern is now repeating. There are things we can do right now to stop this cycle—wear a mask, stay 6 feet away from others + maintain healthy habits. https://t.co/9SBktekjPZ

If a case has not been reported as a death, and it has been more than 30 days since the first positive test result or onset of symptoms, then a person is considered recovered.

DOH data reports 77 percent of confirmed cases have recovered, which would suggest there are an estimated 19,804 active cases of COVID-19 statewide. In addition, an unknown number of people may be carrying the virus, but are not showing symptoms and have not been tested.

Several factors can hinder accurate calculations of recoveries, a department spokesperson added. Those factors include delayed death reports and people who are in the hospital for more than 30 days or have prolonged symptoms. There have also been instances where a person died after previously being classified as a recovery.

However, it is important to highlight recoveries. FOX43 Reveals tracked the statewide numbers of new COVID-19 infections and estimated recoveries between July 1 and July 13.

Credit: WPMT
A graph comparing the daily numbers of new COVID-19 cases and estimated recoveries between July 1 and July 13.

Side by side, the numbers show there are almost as many new estimated recoveries each day as there are new COVID-19 infections statewide.

Recovery statistics by county are not released. Due to the unprecedented amount of data DOH staff calculate each day, Secretary Levine said releasing county-by-county recovery data is not a priority at this time.

FOX43 Reveals issues that affect you and your family to keep you informed. Do you have a tip that needs to be investigated? Or documents we should look into? Send us a confidential news tip at FOX43reveals@FOX43.com.