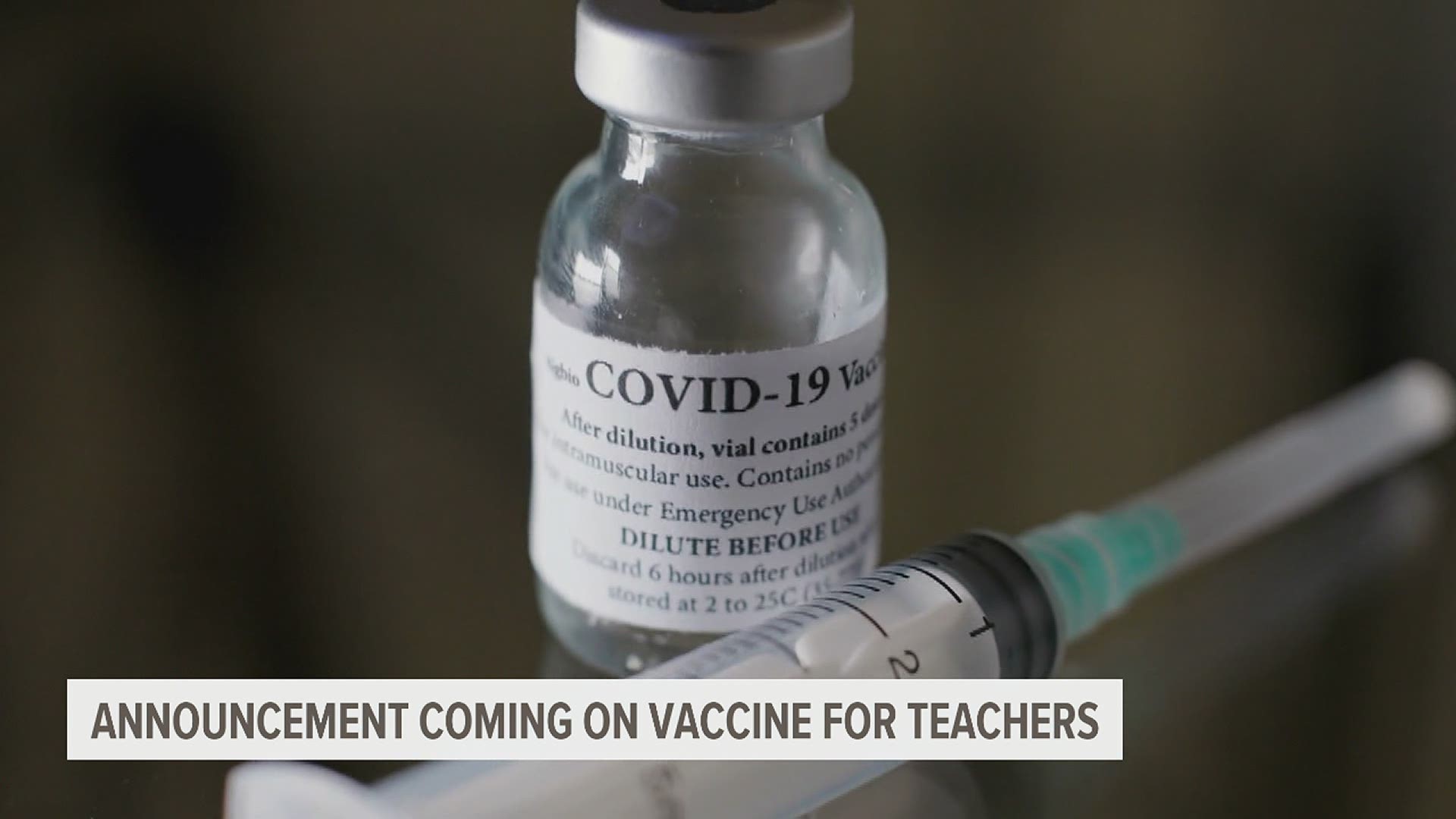 Teachers will now be prioritized to receive a COVID-19 vaccination.

The Governor's office announced late Tuesday that come Wednesday the Governor and the bipartisan COVID-19 vaccine joint task force will announce a plan to 'help protect school communities and get more students back into classrooms by vaccinating teachers and other school staff.'

FOX43 first reported on Monday that discussions on the issue were happening and that teachers could be first in line for the Johnson & Johnson vaccine. Tuesday afternoon Governor Tom Wolf addressed the issue during a press conference as he told reporters the COVID-19 task force would be meeting that evening.

"I think we'll make the formal announcement tomorrow. But, as you know it's already been leaked out," he said.

Currently, teachers are listed in Phase 1b of the rollout along with several other essential workers.

"There's some really important frontline workers who I think, and I think the task force believes on a bipartisan basis, should be included in that," said Gov. Wolf. "Not too far down the road: child care workers and police and fire, grocery store workers."

.@GovernorTomWolf today addressing those reports that discussions were happening with the COVID19 task force over the J&J vaccine and the possibility of rolling it out to teachers. See what he had to say about what's coming tomorrow #COVID19 pic.twitter.com/62jRAs4YmX

The Governor's words came nearly an hour after Pennsylvania's Department of Health was repeatedly asked similar questions, but refused to reveal any specific details on possibly rolling out the Johnson & Johnson vaccine to educators.

"More details on how we're going to be working with teachers will be coming later in the week," said Lindsey Mauldin of the PA Dept. of Health earlier on Tuesday.

Following the PA Department of Health's press conference FOX43 reached out to press for more details on how many doses of the Johnson & Johnson vaccine Pennsylvania is set to receive and if any of those doses would be immediately reserved for teachers when they arrive.

In an email, the PA Department of Health wrote in part, "the task force continues to work on a plan for the rollout of the Johnson & Johnson vaccine. The Administration hopes to announce specific details later this week. When that announcement is made, we are more than happy to help with any outstanding questions you may have to best understand and report the process to help you and your viewers."

In preventing COVID-19, the Johnson & Johnson efficacy rate is 66% overall and 72% in the United States. It's 86% effective in preventing severe illness and death.

Moderna and Pfizer are nearly 95% effective. Experts note the Johnson & Johnson vaccine was tested after variants of the virus had already evolved.

The Governor noted one key component of the Johnson & Johnson vaccine is that it only requires one shot. Moderna and Pfizer require two.