Up to 60,000 COVID-19 vaccine appointments may need to be rescheduled in Pennsylvania

Pennsylvania's Department of Health notes 30,000-60,000 doses may need to be rescheduled by a week or two following severe weather. 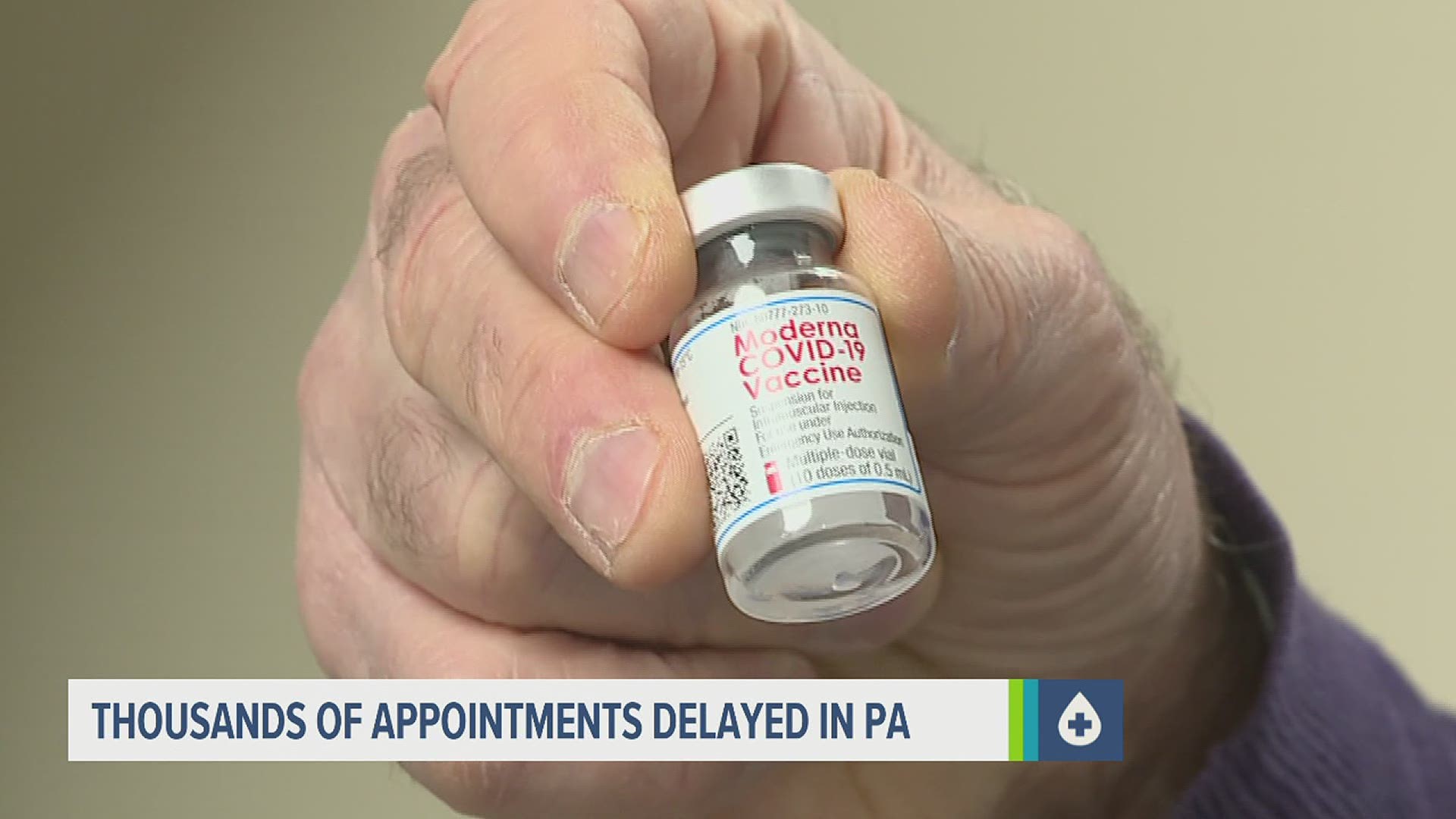 PENNSYLVANIA, USA — Pennsylvania's Department of Health said over the next two to three weeks about 30,000 to 60,000 first doses may need to be rescheduled as inclement weather has delayed deliveries of the COVID-19 vaccine across the state.

The news comes as the Department is set to present a strategic plan Tuesday to the state's bipartisan COVID-19 task force as it seeks to rapidly increase the efficiency of distribution.

"I'm looking forward to tomorrow hearing from the Department of Health, Secretary Beam, presenting to the task force a recommended strategic plan that's based on the feedback that the task force has brought to the Governor," said Republican Sen. Ryan Aument of Lancaster County, who is a member of the task force.

Aument noted supply is still at the heart of the issues the state is facing in vaccination distribution. But, he said communication across the state must also be improved.

Multiple Pennsylvania providers have reported not receiving deliveries of both the Moderna and Pfizer shot last week due to issues caused by mother nature after Pennsylvania's Department of Health said the weather directly impacted vaccination hubs.

The Department said the Moderna vaccine was not shipped from the distributor on Monday, Tuesday, or Wednesday of last week. Pfizer-BioNTech vaccines were not shipped on Monday, February 15 and only a limited amount of Pfizer-BioNTech vaccine was shipped on both Tuesday and Wednesday of last week. Providers are contacting impacted patients. Meantime, providers who did not receive doses last week are expected to receive deliveries this week.

How's the vaccination rollout going? It's not going, this pharmacy tells me, after it had to cancel, delay, & change nearly 220 appointments in the past few days w/450 more to possibly come. Let's dive into *why* it's happening @FOX43 at 4 & 5 #COVID19 https://t.co/jgEPf7hMUt pic.twitter.com/0a5vgCoLZA

Today I spoke to @SenatorAument who sits on the new COVID-19 task force in Pennsylvania to get his take on some of the top questions over the vaccination rollout-- and what solutions may be in store. @fox43 #covid19 https://t.co/gQGpczK8ZT pic.twitter.com/PJLXUy2dMy

Pennsylvania was allocated 183,575 first doses of vaccine this week, 112,400 doses of Moderna and 71,175 doses of Pfizer-BioNTech. Philadelphia receives its own, separate allocation of vaccine.