After Pennsylvania paused administration of the J&J vaccine, some residents said even if vaccinations restart, they wouldn’t get it. 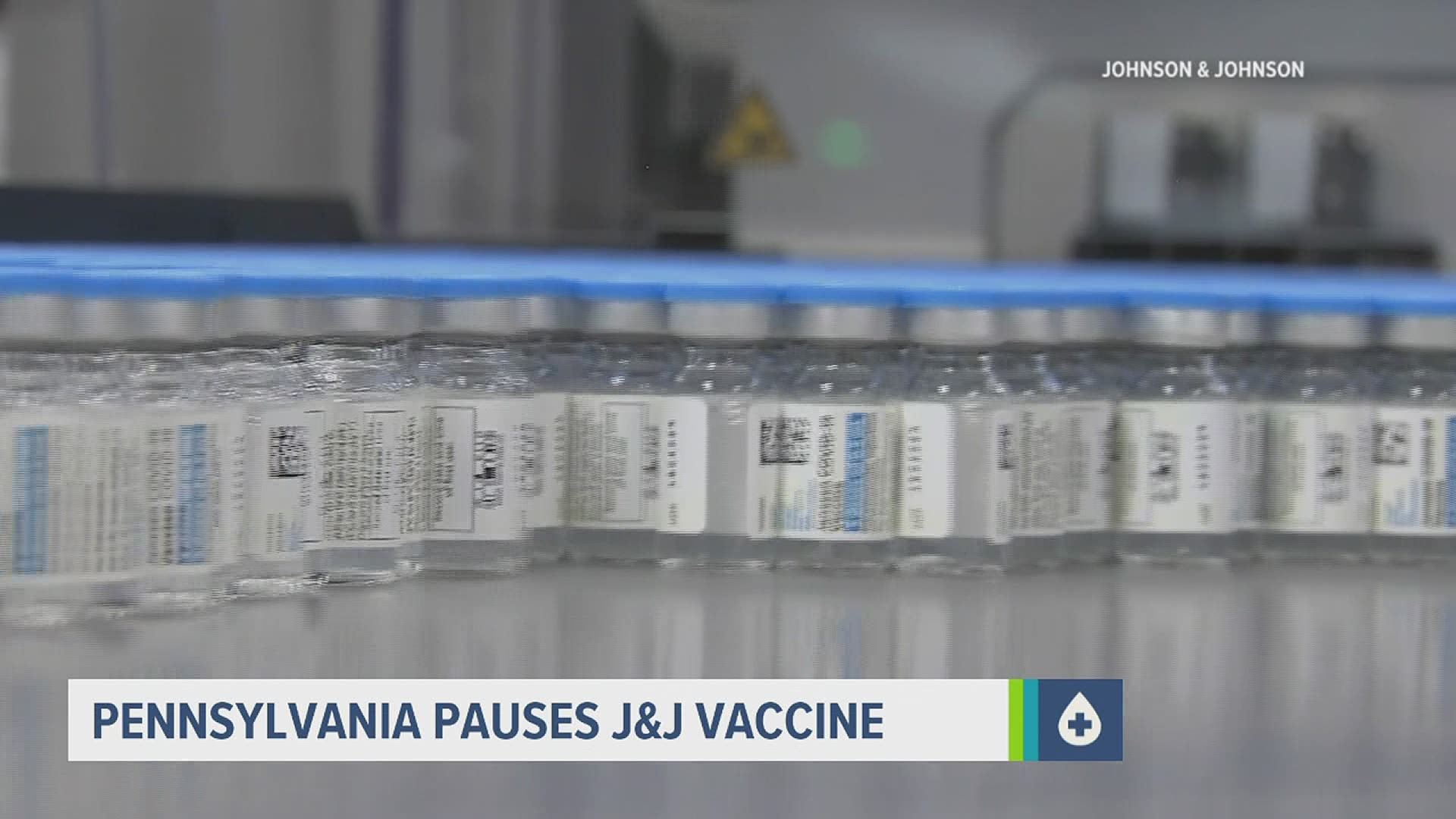 LANCASTER, Pa. — Pennsylvania announced a pause on administering the Johnson & Johnson vaccine from April 13 to at least April 20.

All 50 states paused or recommended providers pause vaccinations after the CDC and FDA released guidance suggesting the pause on Tuesday morning.

The CDC is investigating six cases of unusual blood clots that happened 6 to 13 days after getting the Johnson & Johnson vaccine.

All six cases happened in women ages 18 to 48, one of whom died.

The clots formed in veins that drain blood from the brain, along with low platelets, the fragments that usually form clots.

“Normally when we treat blood clots, we treat them in a way that could increase [the risk of these patients] with low platelets,” said Dr. Denise Johnson, Pennsylvania Acting Physician General. “So [the CDC] really wanted to heighten the alertness of the providers of these patients.”

The news heightened worry over vaccine hesitancy, which could contribute to a slower vaccine rollout.

Pennsylvania Department of Health officials announced the statewide pause on Tuesday afternoon, saying the news should not discourage people from getting vaccinated.

“This entire process is monitored so tightly and with such integrity that folks really can trust in the vaccine that they are getting, and we hope that that continues with the Pfizer and the Moderna vaccine while we have the Johnson and Johnson vaccine on pause,” said DOH Acting Secretary Alison Beam.

The Johnson & Johnson vaccine held enormous promise because its single-dose regimen and simpler storage requirements made it easier to distribute in rural areas and mobile clinics.

But now, even if Pennsylvania restarts Johnson & Johnson vaccinations, some said they wouldn’t get it.

“Johnson and Johnson can't even handle baby powder, so I was not going to let them give me a vaccination,” said Christine Brown of Lancaster, referencing a $2.12 billion settlement in 2018 to women who blamed its baby power for their ovarian cancer.

Brown said the pause of a publicly available vaccine made her more hesitant to receive any vaccine at all.

“We just lost two family members,” Brown said. “Myself, my wife and my children, we all had COVID. Actually I was going to consider the vaccination during that time, but then after today I was like there's no way in the world.”

More than 6.8 million doses of the Johnson & Johnson vaccine have been administered in the U.S., including 262,739 in Pennsylvania, according to DOH. The vast majority of recipients had no serious side effects.

However, officials say those who have received the Johnson & Johnson vaccine in the past two weeks should contact their health care provider if they experience symptoms of severe headache, abdominal pain, leg pain or shortness of breath.

RELATED: What to watch for if you got Johnson & Johnson COVID shot