The Supreme Court of Pennsylvania has agreed to hear the case regarding the state's emergency declaration.

PENNSYLVANIA, USA —  The Supreme Court of Pennsylvania has agreed to hear a case regarding the state's emergency declaration.

The State General Assembly voted to end a statewide emergency proclamation the governor enacted in March, to help stem the spread of the coronavirus. Senate GOP leaders Joe Scarnati and Jake Corman filed a petition in Commonwealth Court asking that Wolf be directed to end the shutdown order. Governor Wolf’s petition asked the state’s Supreme Court to use King’s Bench jurisdiction to rule in his favor immediately, saying the Legislature is misrepresenting what the concurrent resolution means and that they don’t have the constitutional authority to end the declaration.

You can read the order in its entirety here: 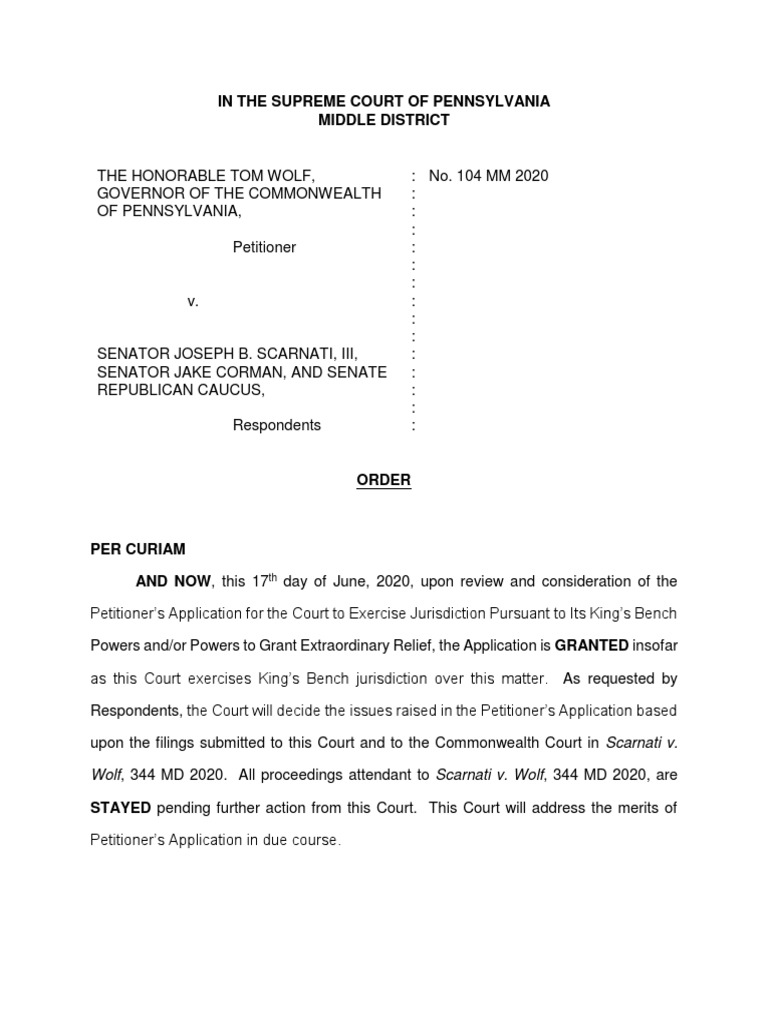 104 MM 2020 Order Granting KB Jurisdiction 6-17-20 (1)
MIDDLE DISTRICT ORDER PER CURIAM AND NOW, this 17th day of June, 2020, upon review and consideration of the Petitioner's Application for the Court to Exercise Jurisdiction Pursuant to Its King's Bench Powers and/or Powers to Grant Extraordinary Relief, the Application is GRANTED insofar as this Court exercises King's Bench jurisdiction over this matter.

Within the order, it says that all proceedings prior to the court hearing the case, including Governor Tom Wolf's reopening plan and phases, will remain in effect while the case is heard.

Last week, Wolf filed for Kings Bench with the Supreme Court in response to Senate Republicans filing the lawsuit in Commonwealth court.

"We look forward to a swift decision from the Supreme Court now that they’ve taken up the important questions raised regarding the legislature’s clear authority to terminate the Governor’s Emergency Declaration."