On Friday, May 29, Dauphin, Franklin, Huntington, Lebanon, Luzerne, Monroe, Pike and Schuylkill Counties will move into the Yellow Phase of reopening. 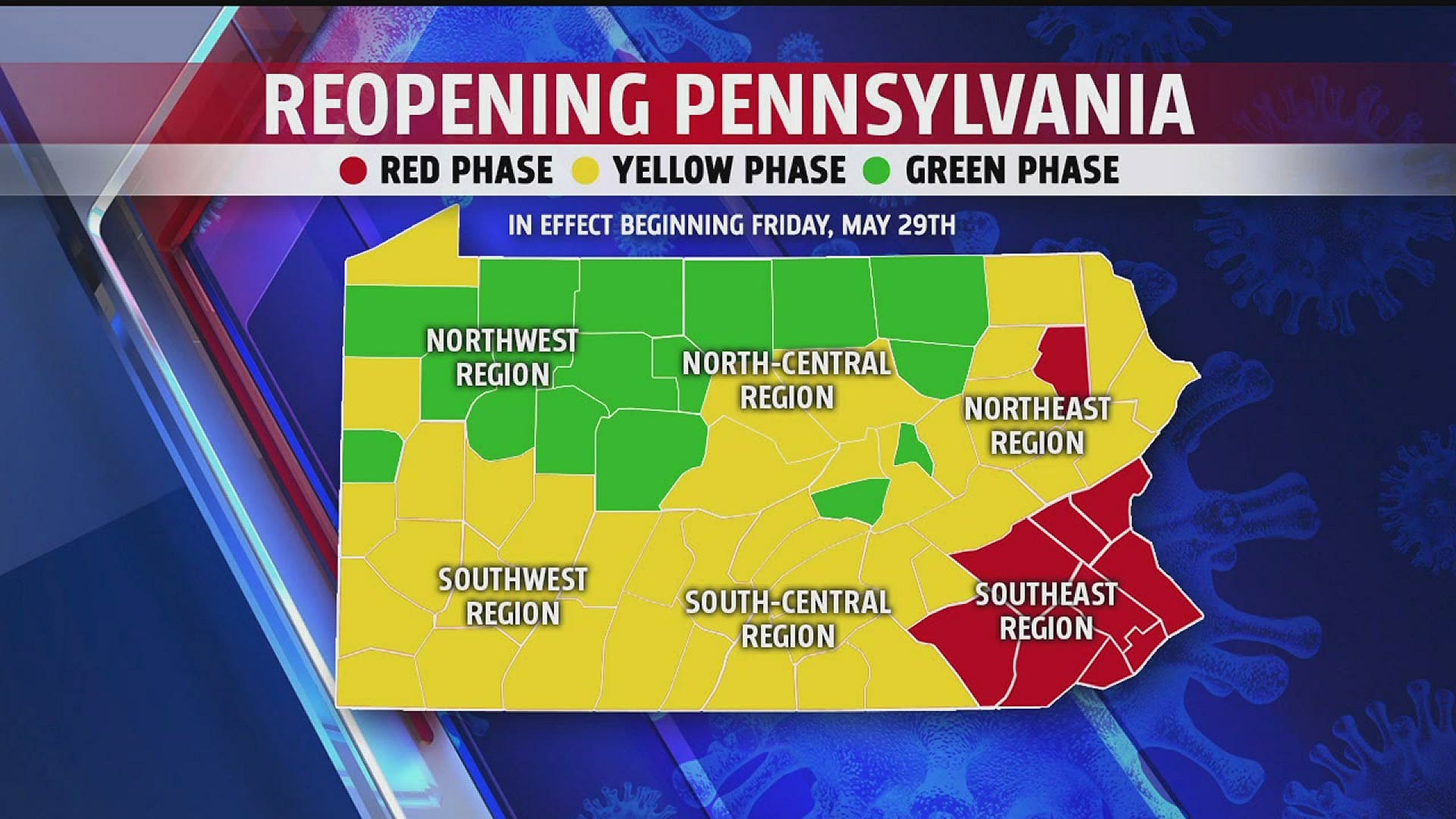 PENNSYLVANIA, USA — Gov. Tom Wolf is easing some pandemic restrictions in Philadelphia and the heavily populated suburbs on June 5, while lifting them almost entirely in 17 rural counties next week.

Pennsylvania is continuing to emerge from a shutdown imposed nearly two months ago to help slow the spread of the new virus.

Wolf is accelerating his reopening plan even though more than 20 Pennsylvania counties remain above the state’s target for new infections that were supposed to qualify them for an easing of pandemic restrictions. Eight counties are more than three times over.

On that same day, Dauphin, Franklin, Huntington, Lebanon, Luzerne, Monroe, Pike and Schuylkill Counties will move into the Yellow Phase of reopening.

Local elected officials, Republican and Democrats alike, have been pressing for shutdown relief amid skyrocketing unemployment.

You can read the full release from the Governor's office below:

The counties moving to yellow on May 29 include Dauphin, Franklin, Huntingdon, Lebanon, Luzerne, Monroe, Pike, and Schuylkill.

Counties that remain in red on May 29 and are expected to move to yellow by June 5 include Berks, Bucks, Chester, Delaware, Lackawanna, Lancaster, Lehigh, Northampton, Montgomery, and Philadelphia.

RELATED: Here's what to expect as 12 more Pa. counties reopen ahead of Memorial Day weekend

RELATED: Gov. Wolf announces the next 12 counties to move into yellow phase on May 22

“We know not only that we succeeded in slowing case growth, but that our actions, our collective decisions to stay at home and avoid social contact – we know that saved lives,” Gov. Wolf said. “My stay-at-home order did exactly what it was intended to do: It saved lives and it bought us valuable time.”

Gov. Wolf referred to a study by Drexel University that indicates that in Philadelphia alone, 60 days of staying at home resulted in more than 7,000 lives saved and prevented more than 68,000 people from needing hospitalization.

Yellow Metrics
In deciding which counties to move to yellow, the state used risk-based metrics from Carnegie Mellon University combined with contact tracing and testing capability and a sustained reduction in COVID-19 hospitalizations. While the 50 new cases per 100,000 population was considered, it did not weigh any more heavily than other factors.

Over the past two weeks:

Green Metrics
Counties that have been in the yellow phase for the requisite 14 days have been closely monitored for the risk associated with transitioning to the green phase.

The guidelines for moving to green are available here, and include specifics for employers, large events, and social gatherings.

Moving Forward
“We continue to increase testing every day and are continuing to build our contact tracing capacity, as well,” Gov. Wolf said. “We are able to do these things, to be successful, to reopen in this manner because of the Pennsylvanians who have made tremendous sacrifices since the virus emerged in our state,” Gov Wolf said. “Thank you.

“I want to remember and honor all of those who we lost and give solace to their family and loved ones. The last two months have been trying and they have tested each of us, and I want to thank and acknowledge all the people of our commonwealth who have been called upon to upend their lives to keep their neighbors, friends and family safe.”