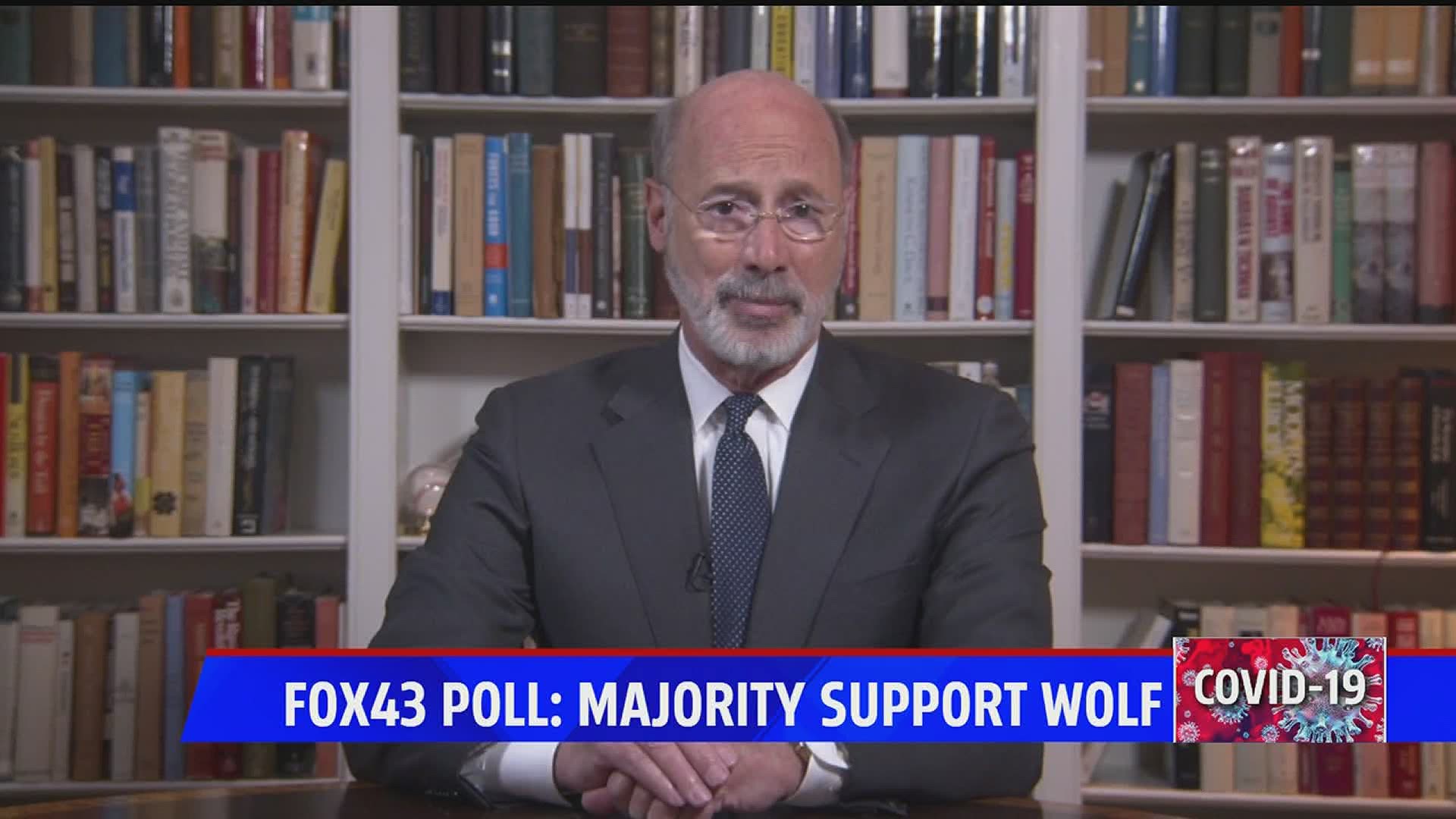 As Pennsylvanians hope they're nearing the end of the COVID-19 health crisis, more than two-thirds approve of the way Governor Tom Wolf has guided the commonwealth through the pandemic.

In a statewide FOX43/Susquehanna Polling & Research poll of 693 registered or likely voters taken April 14-20, 68% of people say the governor is doing a good job managing the novel coronavirus issue. In the poll, 18% disapprove and 13% of people say they weren't sure.

Governor Wolf has bipartisan support, according to Susquehanna P&R President Jim Lee, who says along with 83% of Democrats approving of the governor's handling of the issue, 57% of Republicans statewide are also on board.

"We have to conclude that the governor's strategy thus far is working," Lee said. "The governor is being given a lot of wiggle room. Both parties are giving him the benefit of the doubt, that he's doing what he believes is the right thing to do."

One percent of people admit they are practicing no social distancing.

"That 1% may not seem like a big deal but 1% of the state's population is 120,000 people who have decided to ignore these guidelines," Lee said. "That means a number of those people could be going around spreading the virus. Even that 1% saying no means we're not out of the woods yet."

However, the governor lacks the same wide-ranging support on one of his key issues, the decision to indefinitely close all non-life-sustaining businesses. The governor since has decided to start reopening the state's economy on May 8 with construction allowed to go back May 1.

The FOX43/SP&R poll indicates almost 44% of Pennsylvanians either want to go back to work immediately (11%) or at the start of May (33%), while 38% say their businesses should stay closed indefinitely.

"That's where the rubber meets the road," Lee said. "That suggests voters are giving the governor latitude to manage the crisis, but that he's walking on egg shells as he rolls out the reopening of the commonwealth."

Governor Wolf also has not fully conveyed his message on releasing prisoners to home confinement or community correctional facilities, Lee said. Wolf recently ordered approximately 1,500 to 1,800 prisoners deemed non-violent to be released from prison to help mitigate COVID-19 spread in jail. However, 43% of people polled opposed the decision, while 42% support the governor, and 15% said they weren't sure.

"I think that mirrors some of the national environment right now which is, it's a work in progress. [Trump] has good weeks and bad weeks managing this crisis," Lee said.

Part of the problem, Lee said, is the polling numbers indicate President Trump is not doing a good job conveying his message. Only one in five Pennsylvanians are turning to the president for his daily briefings on COVID-19.

"Before, [President Trump] had the economy as his number one issue going into the election. That's now gone," Lee said. "He's going to be graded on one issue and one issue alone: how did he steer us through this crisis. The fact that only 12% of Democrats are tuning into these daily briefings suggest the president may have a hard time communicating." 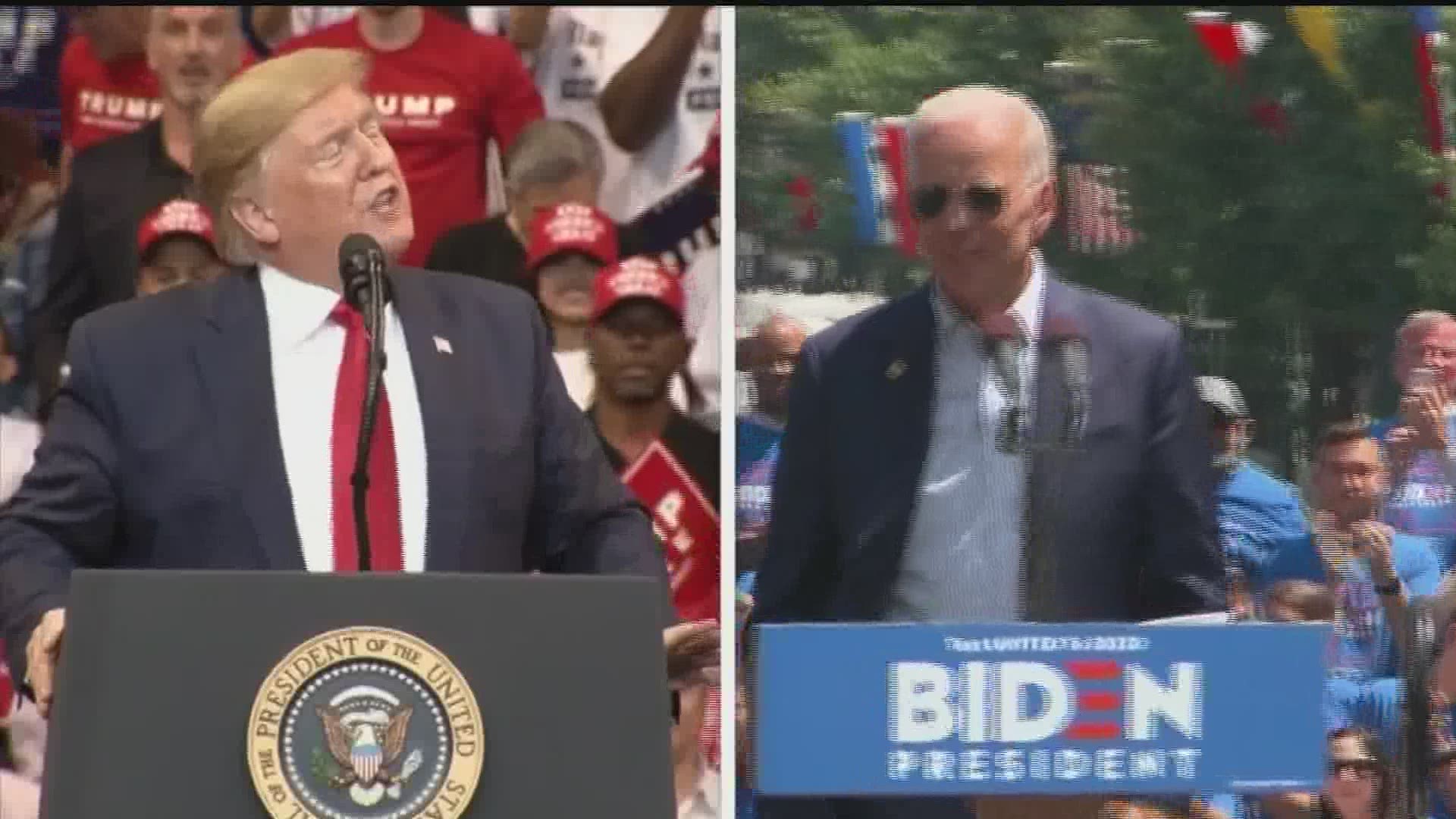 Susquehanna Polling & Research polled 693 Pennsylvanians from April 14 to 20. Among the respondents, 45% were Democrats and 41% were Republicans. White voters made up 84% of those who answered, and 60% were female.