In last week's school board meeting, elementary teacher Tanner Cross said he would not call transgender students by their preferred pronouns. 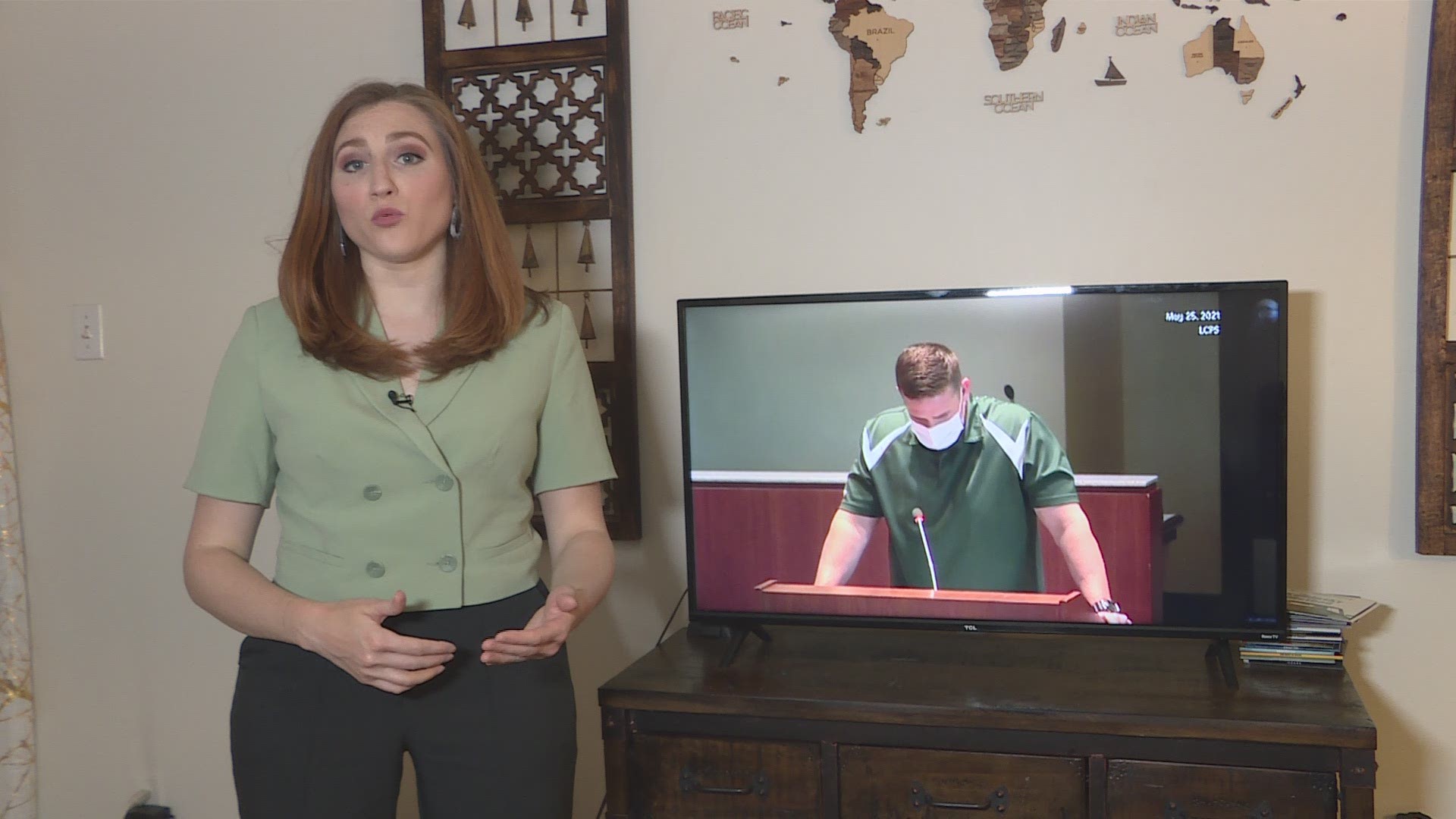 LOUDOUN COUNTY, Va. — A Loudoun County Public Schools teacher is suing the school system after being placed on administrative leave after he made comments saying he would not call transgender students by their chosen pronouns.

The school board is considering adopting a policy (8040) that would require LCPS staff to "allow gender-expansive or transgender students to use their chosen name and gender pronouns that reflect their gender identity without any substantiating evidence, regardless of the name and gender recorded in the student’s permanent educational record."

During the public comment section at last Tuesday's meeting, Leesburg Elementary gym teacher Tanner Cross spoke out against the policy in a now viral speech that says:

"My name is Tanner Cross, and I'm speaking out of love for those who suffer with gender dysphoria. 60 Minutes this past Sunday interviewed over 30 young people who transitioned, but they felt lead astray, because lack of pushback or how easy it was to make physical changes to their bodies in just three months. They are now de-transitioning. It is not my intention to hurt anyone, but there are certain truths we must face when ready. We condemn school policies like 8040 and 8035, because it will damage children, defile the holy image of God. I love all of my students, but I will never lie to them, regardless of the consequences. I'm a teacher, but I serve God first, and I will not affirm that a biological boy can be a girl and vice versa, because it's against my religion. It's lying to a child. It's abuse to a child. And, it's sinning against our God."

Less than two days after those remarks, LCPS sent Cross a letter, saying he was being placed on paid administrative leave, "pending an investigation of allegations that [he] engaged in conduct that had a disruptive impact on the operations of Leesburg Elementary School.”

When the Alliance Defending Freedom wrote to LCPS on Cross' behalf, requesting he be taken off leave and the school system refused, ADF attorneys filed a lawsuit on his behalf.

.@AllianceDefends is suing @LCPSOfficial on behalf of teacher Tanner Cross.

He was placed on admin. leave after saying in a school board meeting that he would not address transgender students by their preferred pronouns (remarks below). @wusa9 pic.twitter.com/zANgvv3zNT

The suit says, "This case is not about how schools should treat students who struggle with gender dysphoria. It is about whether public schools can punish a teacher for objecting, as a private citizen, to a proposed policy, in a forum designated for the purpose of considering whether to implement such policies, where the policy would force him to express ideas about human nature, unrelated to the school's curriculum, that he believes are false."

The suit alleges that the school board "violated the Virginia Constitution when it punished Cross by retaliating against him for expressing his beliefs in a public forum, and also violated his free exercise of religion by discriminating against his religious beliefs."

WUSA 9 spoke with a parent who agrees with Cross' views and one who identifies as transgender/gender fluid and does not — and both agree that LCPS was hasty in placing Cross on leave. Instead, they each requested more of a discussion between the board, school community and Cross, first.

And — it's an important discussion, parent and vice president of Equality Loudoun (a nonprofit advocating for LGBTQ+ people in Loudoun County), Cris Candice Tuck said.

Tuck identifies as transgender and gender fluid and has two students at Leesburg Elementary. He said he's known Cross for a while and always thought he was a nice guy. He was shocked to hear his speech last week.

"Religion doesn't factor in here. It's the safety and well-being of a child. As a parent in Loudoun County, it doesn't matter what my children are, they should be cared for, affirmed and kept safe by their teachers, their staff and their faculty," he said. "That's what we trust them to do. Not for those teachers and staff to bring their religious beliefs in as a way to harass and hurt students."

Parents who agree with Cross, like Heather Gilley, said they were shocked by the school's response.

"When I heard his speech, it was so loving and respectful. And you could tell that he loved his students, but that he didn't want to go against his religious values," Gilley said. "And it was shocking to me that on his own private time, in a public forum, that expressing that could lead to his being put on administrative leave ... To me, that's, that's canceled culture. That's, you know, hurting someone's freedom of speech ... I never thought I would see a day where that would happen in America."

The lawsuit is asking the court to immediately halt the enforcement of Cross' suspension.

LCPS said it does not comment on pending litigation.