Some of the people arrested during this week’s protests in Lancaster City had their bail set at $1 million before it was lowered on Thursday. 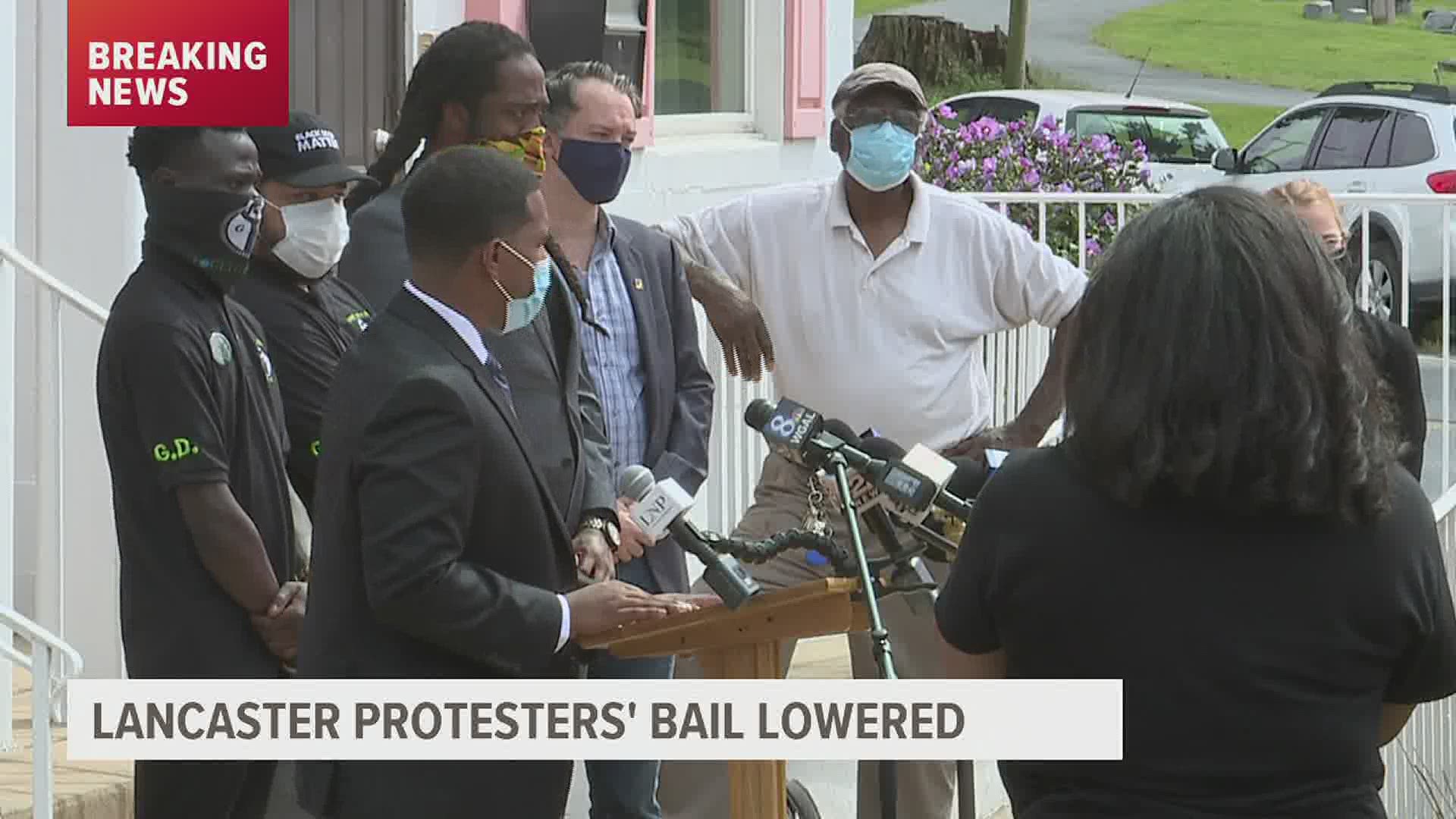 LANCASTER, Pa. — Editor's note: The above video is from September 15.

UPDATE (September 17): Nine people charged with crimes in connection to the protests in Lancaster earlier this week have had their bail modified.

According to the police release, the bail hearings began with Lancaster County Judge Dennis Reinaker noting that there is disagreement among the public regarding what bail should be, while recognizing the initial actions regarding bail were taken in “the spur of the moment.”

“These are all serious matters we are dealing with,” Judge Reinaker said.

There were no changes to the existing charges.

Those that had their bail modified to $50,000 unsecured (meaning there is no monetary posting required for release) are:

PREVIOUSLY: Some of the people arrested during this week’s protests in Lancaster City have had their bail set at $1 million.

A total of 13 people were arrested on riot-related charges following the police shooting of 27-year-old Ricardo Munoz. At least seven remain in jail in lieu of $1 million bail, each facing felony charges of arson, riot and vandalism, as well as related misdemeanors.

The unusually high bail amount drew the attention of community activists and some officials, including Pennsylvania Lt. Gov. John Fetterman.

“In this particular case, it's blatantly unconstitutional given the nature of the charges. And I'm pointing that out,” Fetterman said, referring to a tweet he posted decrying the bail figure.

Bail is used in the criminal justice system to ensure defendants will show up at their scheduled court hearings. In some cases defendants only need to post a percentage of the total bail, usually 5 or 10 percent.

The Eighth Amendment of the Bill of Rights protects defendants from “excessive bail.”

Rule 542 of the Pennsylvania Code states, “The amount of the monetary condition shall not be greater than is necessary to reasonably ensure the defendant’s appearance and compliance with the conditions of the bail bond.”

“My reaction was honestly shock, said Jules Berkman-Hill of community organizing group Lancaster Stands Up. I was not expecting that, especially because that hasn't happened, to my knowledge, in any of these cases yet.

The Lancaster Bureau of Police requested a high bail due to the “serious nature” of the defendants’ crimes, public information officer Lt. Bill Hickey said.
The office of the Magisterial District Judge who decided the amount, Bruce Roth, said the judge could not comment on the case, but confirmed the Lancaster Police request for a higher bail was considered.

“I think that what we're seeing are perfect examples of how our criminal justice system is broken, that as a county we are setting at $1 million for people that were expressing their right to protest,” Berkman-Hill said.

However Judge Roth has handled other protest-related cases before and set much lower bail amounts.

Twenty-two-year-old Julio Torres was arrested for his role in George Floyd protests in early June. He was charged with felony rioting and aggravated assault, and misdemeanor resisting arrest and disorderly conduct. On June 2 Judge Roth set a bail of $25,000, which Torres posted June 3.

“I certainty can't remember a protester being assigned a million-dollar bond for those grade of crimes,” Lt. Gov. Fetterman said.

Bail ranges widely between states and counties, but bail amounts in the six-digits and higher are usually reserved for the most serious felonies, such as murder, rape or arson.

Thomas Lane, the former Minneapolis police officer now charged in the death of George Floyd, posted a $750,000 bail in June.

The Administrative Office of Pennsylvania Courts wrote in an email that defendants can request to change their bail amount.