The Lancaster County District Attorney's office is charging a Manheim Township teen as an adult after calling 911 and admitting to killing her older sister. 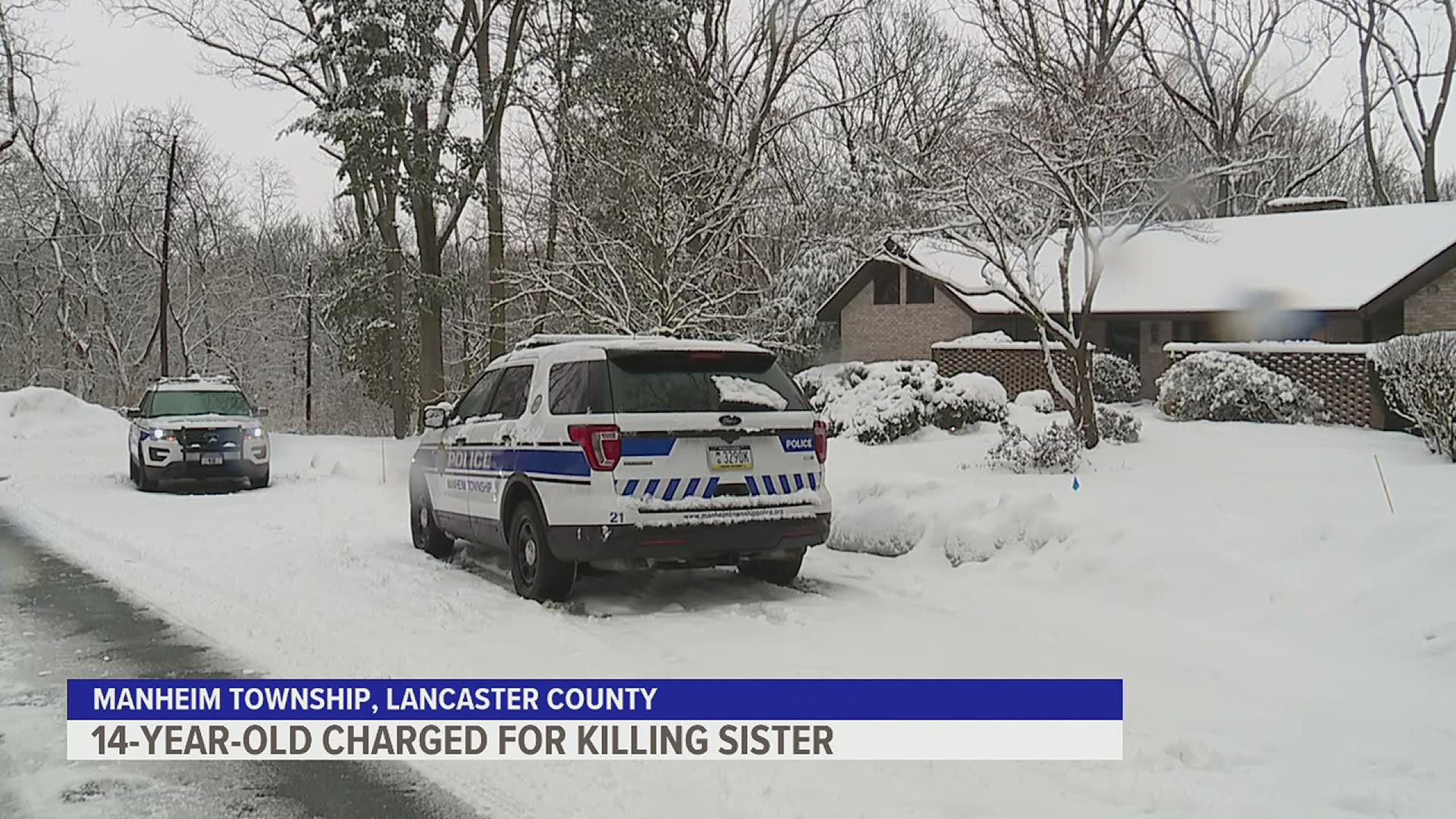 LANCASTER COUNTY, Pa. — UPDATE, 3/9 6:12 a.m.: Claire Miller is now at the state correctional facility in Muncy, Pennsylvania. The decision was made to ensure Miller was placed in "secure, age-appropriate housing, and occurred after consultation with the Lancaster County District Attorney’s Office, the Court of Common Please, and legal defense counsel." Unlike Lancaster County Prison - where Miller had been detained - SCI Muncy contains a dedicated juvenile female unit.

According to Maria Bivens, press secretary at the Pa. Department of Corrections, said that "confining a juvenile in an adult facility is not only a significant operational challenge for most county jails in Pa., but the impact of this confinement on children and emerging adults can cause long term damage to their overall wellbeing." She also added that the Prison Rape Elimination Act PREA) "requires that 'juveniles housed in adult facilities must be separated by sight and sound from adults.'"

In an effort to comply with PREA and due to a simple lack of space, Miller was transferred on March 4.

A 14-year-old Manheim Township girl is charged with killing her older sister in their family home early Monday morning.

Claire Miller, 14, is facing Criminal Homicide charges as an adult for her role in the incident.

According to the Lancaster County District Attorney's Office, shortly after 1:00 a.m. on Feb. 22, a girl later identified as Claire Miller called 911 and reported that she had killed her sister at their home in the 1500 block of Clayton Road in Manheim Township.

Court documents state that she was "hysterical" while on the phone.

Upon arrival around 1:13 a.m., police were met by Claire Miller, who was standing in front of the residence.

According to the criminal complaint, Miller was repeatedly saying, "I stabbed my sister," and police observed what appeared to be blood on the snow near the driveway of the residence.

Police were directed to a bedroom where they found Helen Miller, 19, with a large knife in her neck, just above her chest.

According to the criminal complaint, Helen Miller was lying on her back with her hands up near her head.

Police and EMS personnel attempted lifesaving measures that were unsuccessful.

According to the Lancaster County Coroner, Helen Miller died from multiple stab wounds and her death was ruled a homicide. It was confirmed that she suffered from cerebral palsy.

Officials say at this time they determined that the incident occurred while the girls' parents were asleep.

Claire Miller was taken into custody at the scene and the Lancaster County District Attorney's Office approved charges against her.

“This certainly is an incredibly tragic and unusual case. Our sympathies are with this family as they try to cope with the impact of this crime. Investigators will continue to process and analyze evidence to determine the circumstances that led to the victim’s death.”

Miller was charged as an adult with one count of criminal homicide. She was arraigned Monday morning, denied bail and transported to Lancaster County Prison.

14-year-old charged with killing sister in Lancaster County early this morning. Claire Miller is being transported to Lancaster County Prison after being arraigned.https://t.co/3hPBuzHI4d pic.twitter.com/EsX2f8Pz42

"Shocking and tragic. It’s not the kind of thing we would expect in our neighborhood. It’s very quiet and peaceful," said Sarah Delia, a neighbor who said she did not know the Millers personally. "Obviously a tragedy like this is sad news."

On Monday, the school had virtual classes due to weather, but offered counseling services today and will offer them again on Tuesday.

"We are surprised by the news of this incident and we’re grieving ourselves even as we look to support the family and ensure support for all our students and families within our tight-knit school community," said Head of School Steve Lisk.

Miller's next court date is a preliminary hearing scheduled for Feb. 26.