HARRISBURG, Pa. – State representatives announcing legislation that would toughen the penalties for bullying in Pennsylvania. The bills aim to make all bu... 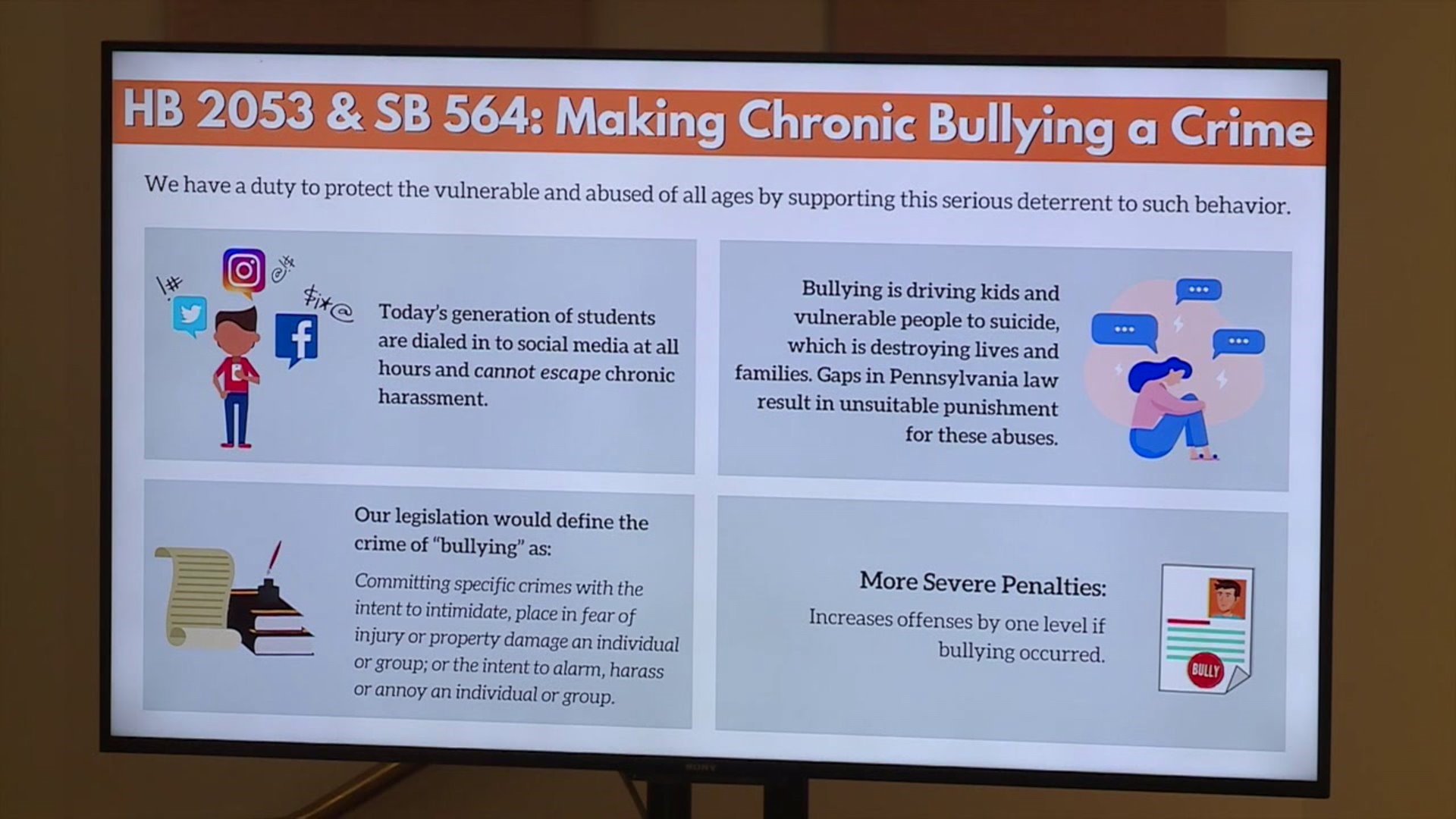 HARRISBURG, Pa. - State representatives announcing legislation that would toughen the penalties for bullying in Pennsylvania. The bills aim to make all bullying related charges one degree higher than they currently are.

"Children are ending their lives before they have even begun to live," State Rep. Kyle Mullins (D) of Lackawanna County, said. "Most of us on this stage are old enough to recall what bullying used to be like. But we're young enough to realize what it's become. As someone who bore the brunt of grade school bullying and teasing I can tell you it wasn't fun. It hurt a lot. But then I got a break at the end of the school day. Often times by Monday, the bullies had moved on."

But with social media, it's a different ball game, and it can be 24/7.

"Times are different now," State Rep. Torren Ecker (R), of Adams & Cumberland Counties, said. "Bullying is different. With technology and the way advancements in how people reach other, these children, and families, and adults can't escape bullying. It's pervasive."

"And it's permanent," Mark Powell, District Attorney of Lackawanna County, said. "There's a record on social media that literally can follow you your whole life. So children no longer feel safe at school, nor safe when they're at home because they can be subject to this bullying literally around the clock."

Under House Bill 2053 and it's companion, Senate Bill 564, the crime of bullying would be clearly defined as, "the intent to place an individual or group in fear of personal injury or property damage; or the intent to harass, annoy, or alarm an individual group."

"We're not dealing with one time, bad judgment events by a kid," State Senator John Blake (D), of Lackawanna, Luzerne, & Monroe Counties. said. "We're dealing with what would be better understood to be as systematic or more sustained set of communication that threatens people, that denigrates them, that instills fear."

And though this legislation won't eliminate bullying, these leaders said it's a step in the right direction.

"What it does is it adds another element in the possibility of cooperation between law enforcement and education," Blake said.

The Senate Bill is already in committee The House Bill has not yet been formally introduced, but Representative Mullins anticipates it will be referred to the judiciary committee any day now.