Omar Capo will be away from his family this Thanksgiving because of chemotherapy, but he is expecting to hear back from his Texas surgeon team about treatment soon 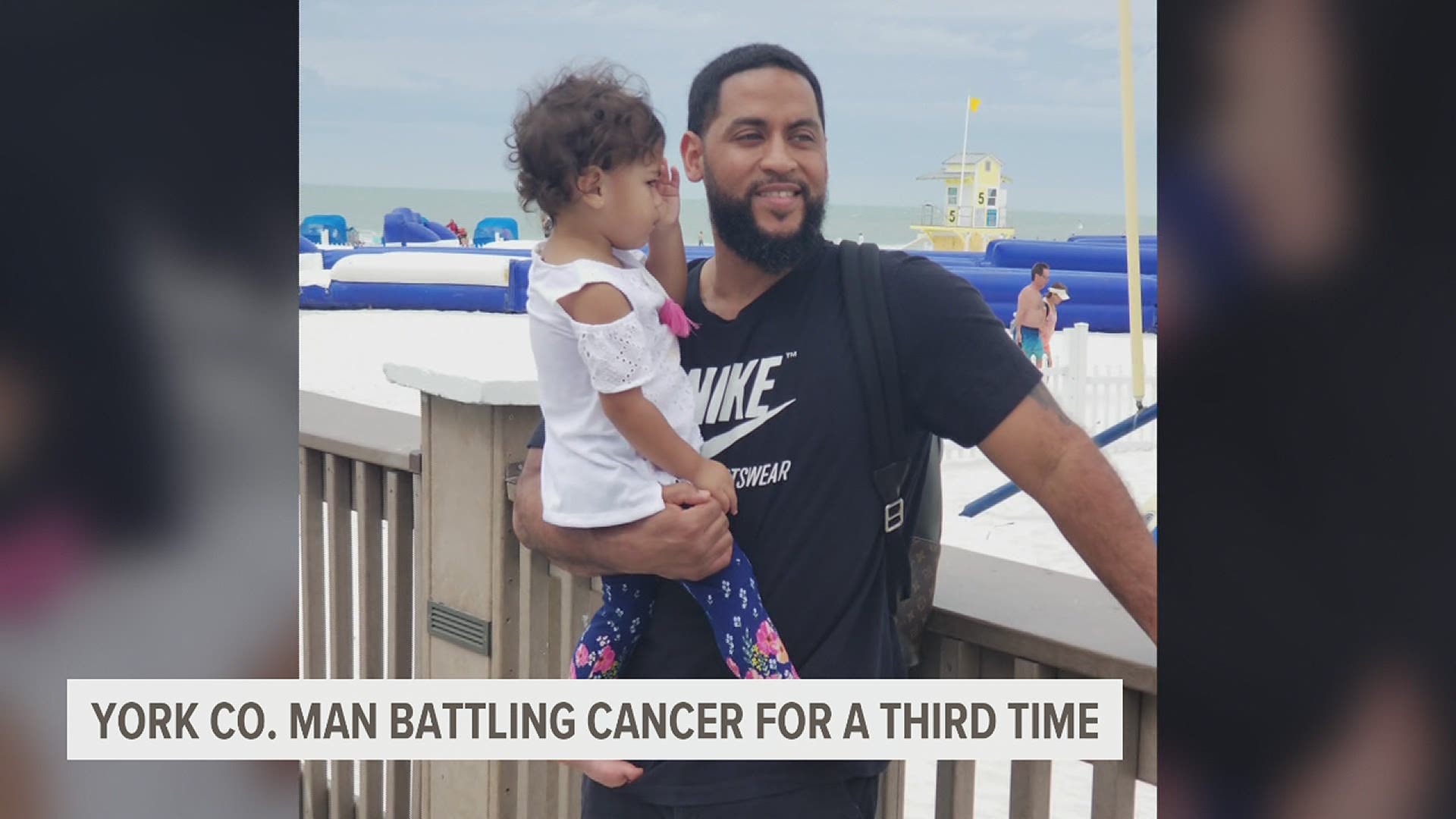 YORK COUNTY, Pa. — A York County barber, who was diagnosed with a rare form of cancer several years ago, thought he beat it not once, but twice. Now he's battling it for a third time.

It started with a toothache back in 2013. Doctors thought the pain in 36-year-old Omar Capo's jaw might be from his wisdom teeth.

"They took all four out and still, I had pain and swelling," Capo said. And it just, it just was unbearable."

A lump appeared later, which doctors removed, but results from the biopsy and CT scan weren't showing cancer. After the surgery, his doctor noticed the tumor was deeper into his neck.

"I mean I was just in shock and kinda numb knowing 'I have cancer,' this can't be me," Capo said. "Never smoked...I've been healthy my whole life."

Like most cancer stories, it's been a long road for Omar and his Fiancé, Jackie Karimi. Surgeries, chemotherapy, radiation and a false sense of hope that the cancer was gone.

This past June, they found out it was back for the third time.

"It's hard to watch him even in pain because most of the time he's comforting me," Karimi said. "Which is even more sad because in a time I should be comforting him, he's telling me 'it'll be okay.'"

Things are different now. He has two little kids at home and a pandemic is causing this full-time barber to stop working, and is making doctors appointments more difficult to book.

"I felt like I can't wait too long," Capo said. I'm trying to get ahead of it. And knowing that I was positive it came back it just needed to be taken care of immediately."

This York County man has found new hope this Thanksgiving, even after learning that his rare form of cancer is back for the third time. We'll take a look at his long journey, and what's next for his treatment tonight on @FOX43 News at 10. pic.twitter.com/7xhK1B2wdU

Omar tells said his local doctors don't feel comfortable operating. Thankfully he was able to book an appointment with a top head and neck surgery team in Texas, in hopes that non-FDA approved drugs and clinical trials will shrink the tumor so he can have surgery.

"I just know he's going to take good care of Omar," Karimi said. "Their team seems amazing and very thorough and it just gave us hope."

And though Omar will be away from his family this Thanksgiving because of chemotherapy, the couple is expecting to hear back from his Texas surgeon team about a game plan for treatment this week.

"My kids are so small, and just God forbid," Karimi said. "I can't lose him. And we'll do everything we have to to make him better."

Because of the pandemic, Omar's doctors do not want him working. The family has a GoFundMe account set up to help pay for medical bills.