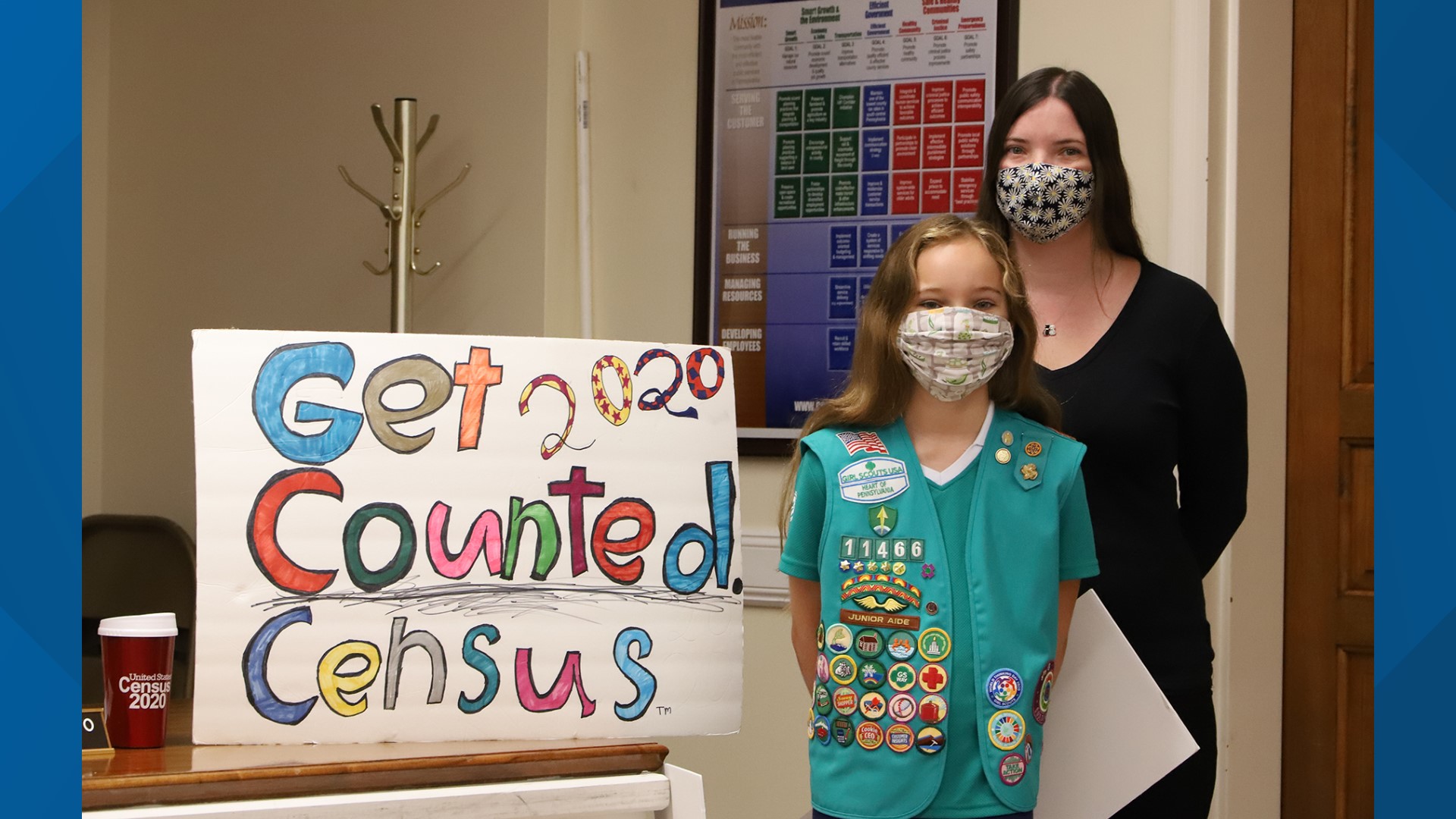 CUMBERLAND COUNTY, Pa. — The September 30 deadline to fill out the 2020 Census is quickly approaching, meaning critical funding is at stake.

Officials have been consistently reminding everyone to get their forms in. However their newest advocate to remind Pennsyvanians to fill out the Census, is just 10-years-old.

March, a Girl Scout, earned a Census 2020 patch for her achievement.

“I wanted to do this so that everyone would understand how important the Census is in our area,” said Miriam March. “The money helps fix our roads, and helps our schools.”

Miriam created a Census 2020 sign and has been displaying it on her front lawn since spring, which garnered the attention of the residents of Boiling Springs. With the help of her mother and troop leader, Mary, she got the word out about the importance of filling out the 2020 Census on social media.

“On behalf of the Board of Commissioners, we want to thank Miriam for being civic-minded in her quest to inform her community about the 2020 Census,” said Commissioner Gary Eichelberger.

As of today, 75.8 percent of Cumberland County residents have replied to the 2020 Census. With a predicted undercount costing more than $84.1 million per year in federal funds, the stakes are high. That works out to $2,093 per person, per year, until the next census in 2030. This per-person figure demonstrates the importance of reaching a 100% count in Cumberland County.

“September 30 at 11:59 p.m. is the deadline for residents to participate in the census. It is vitally important that everyone in Cumberland County gets counted so that the entire county gets its fair share of federal funding,” added Eichelberger.

Data from the census provides the basis for distributing more than $675 billion in federal funds annually to communities across the country. That money supports vital programs that impact housing, education, transportation, employment, healthcare, and public policy.

The United States began the census in 1790. At that time, there were 18,210 people in Cumberland County, and 3.9 million people counted in the original 13 states, the districts of Kentucky, Maine, Vermont, and the Southwest Territory. Almost 230 years later, the mission of the census remains, getting everyone counted.

The census is safe, easy, secure, and a response is required by law. Residents can respond to the 2020 Census, by visiting my2020census.gov.

There is still time to respond to the 2020 Census:

Phone: To complete the questionnaire by phone call 844-330-2020. If you need language support, visit the census website to find the number that works best for you.

Mail: Fill out and send back the paper questionnaire you received in the mail in March or April. Write your responses in black or blue ink, do not use pencil. When finished, return the questionnaire in the envelope provided. If you have lost your return envelope, please mail the completed questionnaire to:

Online:You can respond using your computer, smartphone, or tablet. You cannot save your progress, the online form must be completed in one sitting.