The crew was arrested on live television only to be released a few hours later. 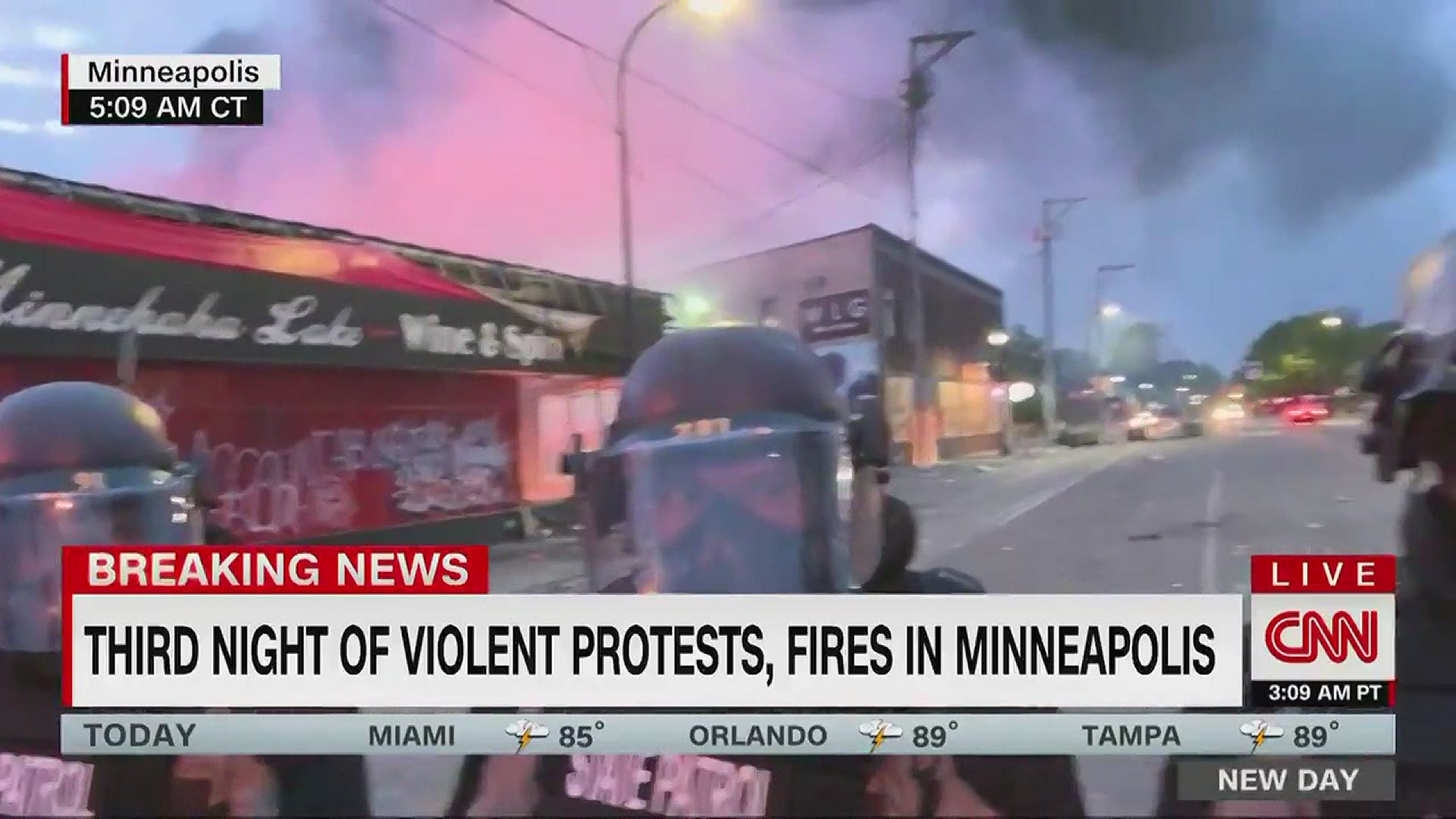 MINNEAPOLIS — A CNN crew was arrested while giving a live television report Friday morning in Minneapolis -- and then released about an hour later -- as the crew covered ongoing protests over the death in police custody of George Floyd.

State police detained CNN correspondent Omar Jimenez, his producer and his cameraman shortly after 5 a.m. CT (6 a.m. ET) as Jimenez was reporting live from a street south of downtown, near where a police precinct was earlier set ablaze.

Minnesota Gov. Tim Walz told CNN Worldwide President Jeff Zucker that he deeply apologizes for what happened and would work to have the crew released.

Jimenez and the others -- producer Bill Kirkos and photojournalist Leonel Mendez -- were taken to the city's downtown public safety building, but were released after 6 a.m. CT.

Jimenez, after his release, then reported live outside from downtown, and said he'd been treated cordially after he'd been led away.

"We're doing OK, now. There were a few uneasy moments there," Jimenez said.

The crew were handcuffed and detained as Jimenez gave a live report on a Minneapolis street. A line of state troopers had just recently arrived in the area, which city police seemed to have abandoned for hours overnight after the police precinct building was set on fire.

Police told the crew they were being detained because they were told to move, and didn't, one member of the CNN crew relayed to the network.

"A CNN reporter and his production team were arrested this morning in Minneapolis for doing their jobs, despite identifying themselves -- a clear violation of their First Amendment rights. The authorities in Minnesota, including the Governor, must release the three CNN employees immediately," CNN said in a statement shortly after their arrest.

Officers approached the crew as they moved in to arrest a protester behind them.

Jimenez could be seen holding his CNN badge while reporting, identifying himself as a reporter, and telling the officers the crew would move wherever officers needed them to. An officer gripped his arm as Jimenez talked, then put him in handcuffs.

"We were just getting out of your way when you were advancing through the intersection," Jimenez said.

After the CNN photographer was arrested, his camera was set on the ground and continued to transmit live images.

Jimenez and the crew had been reporting from the site, near a city police department precinct that protesters had burned and officers had abandoned overnight. About a block away, a fire was burning at a different, four-story building that had contained restaurants.

Over 100 state police officers in body armor and riot gear had arrived shortly before 5 a.m. CT and lined up near the area where the CNN crew was, near the precinct building on East Lake Street.

For a portion of time overnight -- from sometime after city police abandoned the precinct building that was set ablaze -- police weren't in the area until the troopers arrived Friday morning, Jimenez had reported. The four-story event and restaurant building was burning unabated, and people were throwing things into the flames, Jimenez said.

CNN's Josh Campell, who also was in the area but not standing with the on-air crew, said he, too, was approached by police, but was allowed to remain.

"I identified myself ... they said, 'OK, you're permitted to be in the area,'" recounted Campbell, who is white. "I was treated much differently than (Jimenez) was."

Jimenez is black and Latino.

"State police are going to have a lot to answer for this arrest here," Ramsey said. "(Jimenez is) standing there ... you can see his credential. Just move him where you want to be."

"They should have a designated (media) area, and just tell them to move to that area."