Barna gets behind the wheel at Pocono Raceway 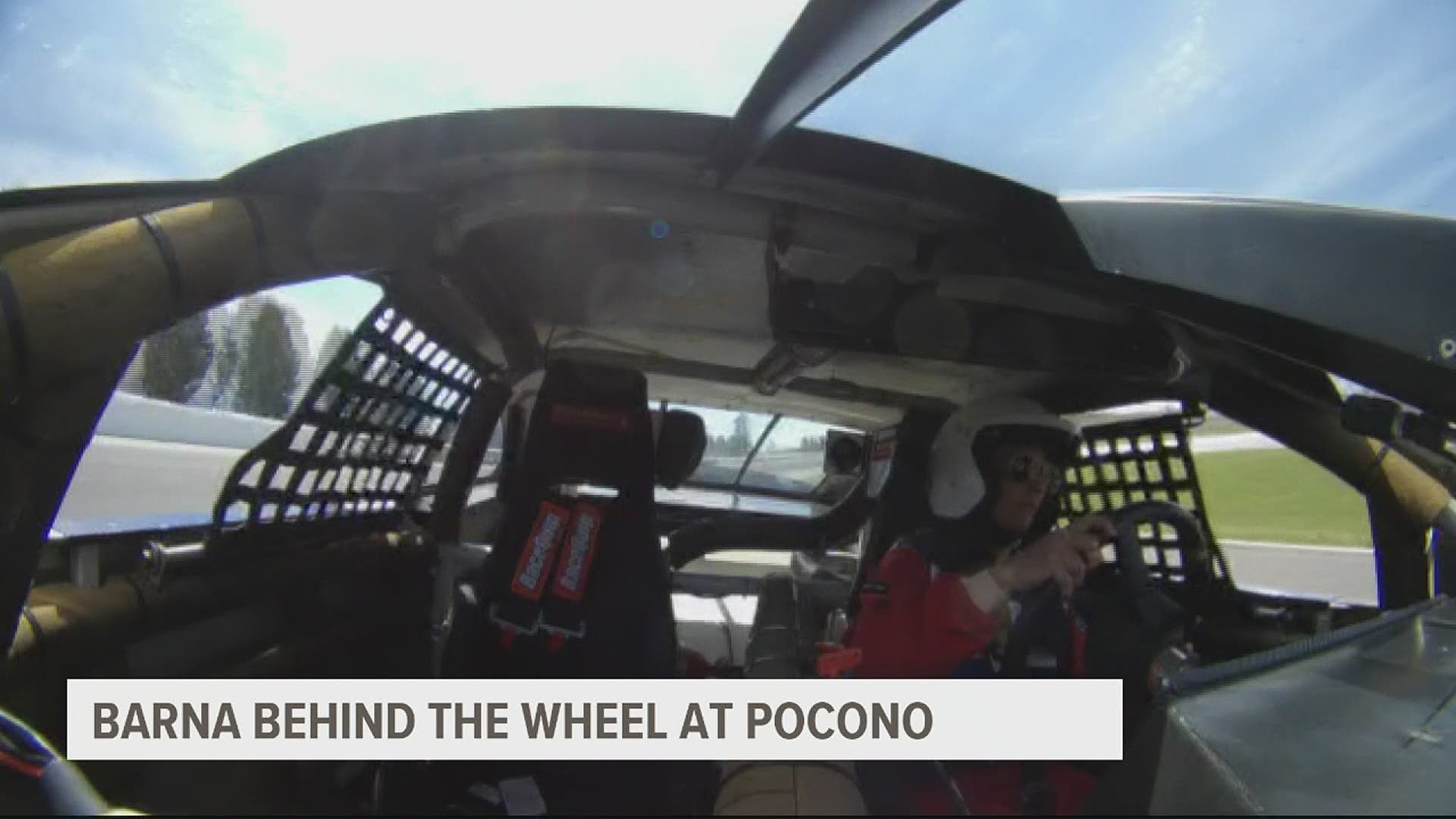 LONG POND, Pa. — If you know FOX43s Lyndsay Barna, she has a need for speed and a little bit of a motor head. She's not topping out at speeds over 200 miles per hour down the front stretch, leaving that to the professionals, but there’s a good reason why they call Pocono Raceway the "Tricky Triangle."

A NASCAR stock car with a 358 cubic inch engine, capable of reaching speeds of 200mph and with more than 600 horsepower churning under the hood. Before Barna took to the track and make her rookie debut, she needed to suit up.

After she got her fire suit on and before heading out to the track, just like before any race, drivers have to have a drivers meeting. Barna's was more of a safety class and learning key points about the car and the tricky triangle.

Since, she didn’t have a 2-way radio in her ear, she was given a lesion on all the flags and a paddle with a message if Barna is too close or too far from her guide car to adjust my following distance.

Before she jumped into the drivers seat, she teamed up with Chris Marcho from Susquehanna County. A former legend driver, so naturally they had a good conversation about dirt track racing.

"I’m going to show you what you’re supposed to do on the first lap. Then, I might get out there a little bit. We don’t want you doing what I do on the second lap. Don’t tell anyone. That’s because you’re a sprint car fan," said Marcho.

As they took a lap, the instructor pointed out the key points on the track. For instance, a cone to mark where she should start letting her foot off the throttle, dip into the corner, start hammering down again and then pull back up to the track within a car length of the wall. "It’s a little uncomfortable from the passenger seat," said Barna.

“You have to go out there and make me proud. Sometimes we like to pick on the girls," said Marcho.

“Be careful in the turn two area. It’s kind of like that half turn in the back. Be a little careful there. The wall comes up quick," said Deegan.

“It’s a fine line between absolutely loosing control and staying on the race track," said Barna.

Out of the passenger seat and right into the drivers seat. A little nervous but excited.

Time to get to fourth gear – take off the training wheels and put the pedal to the medal.

Her hands at 10 and 4 to help push into the corners. Twenty-miles around the tricky triangle. Trying to hit her marks racing around the 2.5 mile tri-oval.

The drivers were told to keep four car lengths between each car. The three different corners,  turn one, the tunnel turn and the short chute, all have different degrees in banking. It’s a workout and keeps your mind thinking about what to do next.

“When we get into the corners, as we start to go faster, we let out of the throttle more and more as we go faster. First couple laps we don’t let out very much, at all but just have to get that rhythm but that was you’re only problem. You’re pretty good in turn one, turn two and turn three. You really didn’t like turn three too much," said Marcho.

“One-hundred percent, your reaction Lyndsay, was probably the biggest smile from anyone I’ve seen get out of the race car today, said Kevin Heaney, Pocono Raceway Senior Director of Marketing and Communications. 'It caught me a little by surprise how much of a motor head your are, but you got out of the car and you’re smile had to of lasted 10 to 15 minutes. I was like, she needs a minute just to let the adrenaline out of her system because you could tell how jacked up you were."

If you'd like to take part in the Stock Car Experience, click the link for more information.