Booking a vacation on a third-party site could save you some money, but it may not be worth it while the COVID-19 pandemic is still impacting travel. 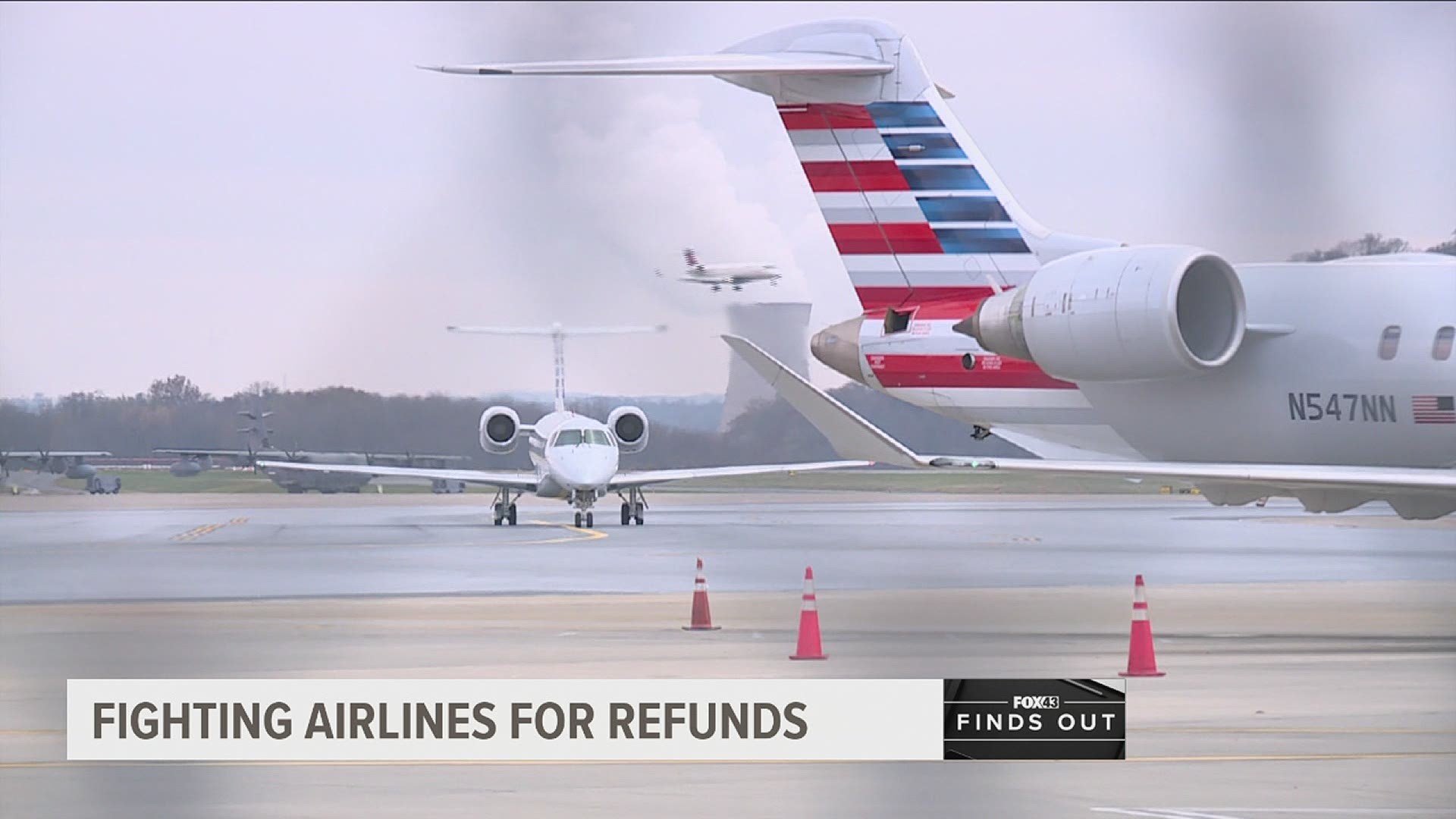 HANOVER, Pa. —
A York County woman says she has been battling two travel companies for the past year.

Sonja Mauk's trip to Ireland was canceled over the summer because of COVID-19 and she's now out almost $2,000.

When the trip was canceled, she thought it would be a simple process to get her money back.

That has not been the case.

So, she contacted FOX43 Finds Out.

"It would be nice if we could have the money back and then when the time comes, we'll book again. We definitely want to do this trip," said Mauk.

Mauk booked her flights through Expedia, with the plan to fly on AirCanada from Philadelphia.

That's where things got complicated because she booked on a third-party site.

She said he was a game of he said, she said. "Back and forth, nobody wants to take the responsibility."

Eventually, she was told she could get a flight voucher, not a refund.

She was also told that would expire in July of 2021, so she asked for an extension.

"Can you extend the expiration date of the credit? With things being shut down in other countries there is no way we can use the credits by July 31st. That was November 18th. Nothing."

FOX43 Finds Out reached out to both Expedia and Air Canada asking what can be done.

Air Canada told us if customers made a reservation through a third-party site - like Expedia, to reach out to that agency.

It wasn't until FOX43 Finds Out got involved that Expedia offered Mauk an AirCanada voucher that never expires and can be used on any Air Canada flight. However, Expedia sent FOX43 that statement but still has not sent further details to Mauk.

When FOX43 Finds Out asked why the customer couldn't get a refund - Expedia said "Air Canada, unfortunately, is not providing refunds for non-refundable tickets, even in cases where the airline initiated the cancellation or schedule change. We have pushed them continuously to change their policies but ultimately eligibility for refunds, vouchers, or credits is determined by the airline and at their discretion."

However, federal law states these airlines should be giving refunds if an airline has flights that take off from or land in the US.

Scott Keyes, the founder of Scott's Cheap Flights and author of Take more vacations said, "There's no pandemic clause that says they don't have to follow the law during COVID-19."

Keyes said he has heard so many similar stories about airlines not abiding by the law.

The Department of Transportation even put on guidance last year specifically about this issue.

We asked Air Canada why it was not offering a refund, given the federal law.

An AirCanada spokesperson told us - "With respect to the DOT, we are aware of their position but have a different legal view."

"I would be very upset about that if I were the traveler in that situation," said Keyes.

The number one tip from Scott's cheap flights is to not book trips on third-party sites.

Sure, they may save you a few dollars, but he says that may not be worth it if you end up in a situation like Mauk.

However, if you do end up in a similar scenario he has another tip.

"See if you can get them both on a conference call, I've actually this before. I've called one, I've called the other, merged them, and said 'You guys figure this out. You guys tell me how do I get this so I actually get the full value of what I've paid for," said Keyes.

If none of that works file a complaint.

The Office of Aviation Consumer Protection is the best place to do that.
That's where Mauk filed a complaint and she wasn't alone.

According to the DOT Monthly air travel report, more than 5,700 customers have filed a complaint against Air Canada last year.

That is the highest number of complaints against any foreign airline.

FOX43 Finds Out did ask the DOT what it plans to do with all of those complaints and so far we haven't heard back on what will be done to remedy the situation.

However, in Canada, there are reports the president of Air Canada has said he will give refunds to customers if the company gets a government bail out.