A 17-year-old who received the Moderna vaccine was told she couldn't get her second dose because the first dose was given in error. Then FOX43 Finds Out stepped in. 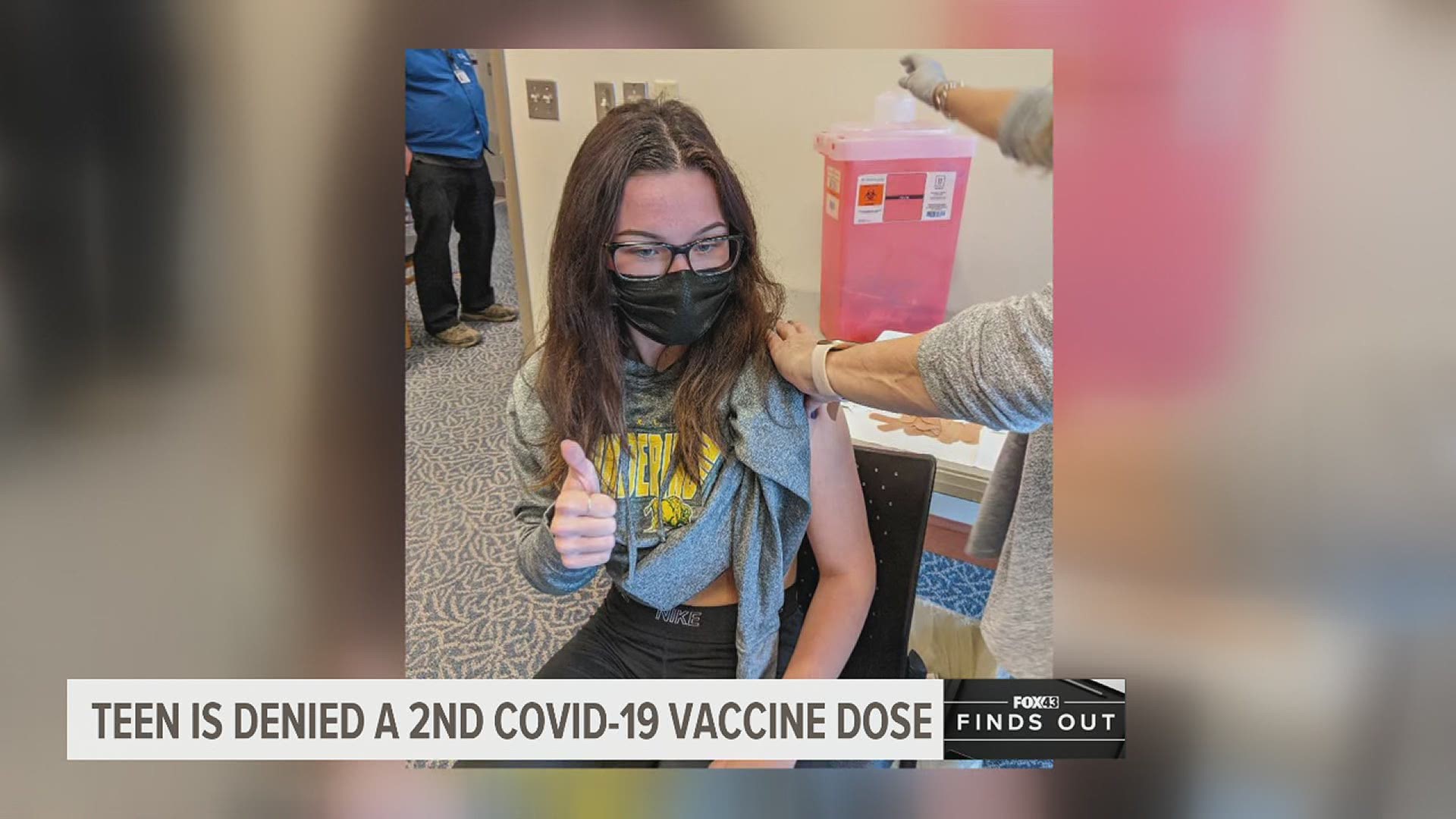 CARLISLE, Pa. — Currently, there is only one COVID-19 vaccine that has emergency use authorization for people under the age of 18 and that's the Pfizer vaccine.

When 17-year-old Hannah Bash was getting her first dose, that's what she thought she would get, however, that's not what happened.

The hospital that made mistakenly gave her the shot said she couldn't get the 2nd dose.

That was until FOX43 Finds Out stepped in.

"It was kind of like a catastrophe with emotions because we had no idea what was going on."

Back in February, Bash became eligible to get the COVID-19 vaccine because of her job.

"I'm putting food on the trays, getting it all organized and ready and then I deliver it to patients. So I am all over the hospital in all the departments," said Bash.

Bash's mom, April, says she made it clear Hannah is 17 years old. "Every station that we were at my mom mentioned she is a minor."

Then Hannah got a dose of the Moderna Vaccine.

That's when Hannah and her mom were told that she should not have received the Moderna vaccine because it's not approved for people her age.

"I just got injected with something I wasn't supposed to have."

Bash says staff at UPMC Carlisle told her mom to call Hannah's doctor to see what to do next.

"She'll be 18 in September and they felt she was old enough to get the second dose."

But when they called UMPC Carlisle to schedule Hannah's second shot - they were told it wasn't possible.

"We got the same person and she's like, 'we'll we can't give you that shot because we registered it as a medical error and ethically we can't repeat that mistake.'"

FOX43 Finds Out emailed both UMPC Carlisle and the Pennsylvania Department of Health to see what could be done for Hannah since both she and her mom wanted her to get the 2nd dose.

UMPC sent us an email that reads in part "This incident has been thoroughly investigated, and we apologize for any related confusion. We are working in close collaboration with the Pennsylvania Department of Health and are working with the family to resolve any outstanding issues."

Then one day later, Hannah got her shot.

Her mom says she does not believe her daughter would have been able to get the 2nd dose without help from FOX43 Finds Out.

THIS is why I love #FOX43FindsOut.

Too often people feel like they’ve been wronged by a company or the government and I’m so happy I can help them in a small way.

Tonight on @fox43, a teenager was denied the 2nd dose of her COVID-19 vaccine until FOX43 Finds Out stepped in. pic.twitter.com/8MOXauOtDa

Hannah had what is considered normal side effects from the second shot - like a sore arm and feeling tired.

The PA department of health did confirm it has received reports of people under the age of 18 getting the Moderna vaccine, just like Hannah. However, it cited the MCARE Act as to why it couldn't disclosure whether or not a facility reported an event or if they had an event.

The CDC says providers should report any vaccine-related errors to the Vaccine Adverse Event Reporting System known as VAERS.

Here's some guidance from the CDC: