Two US senators introduce a bill that would repeal a section of the Consumer Product Safety Act. FOX43 Finds Out the pros and cons of section 6b. 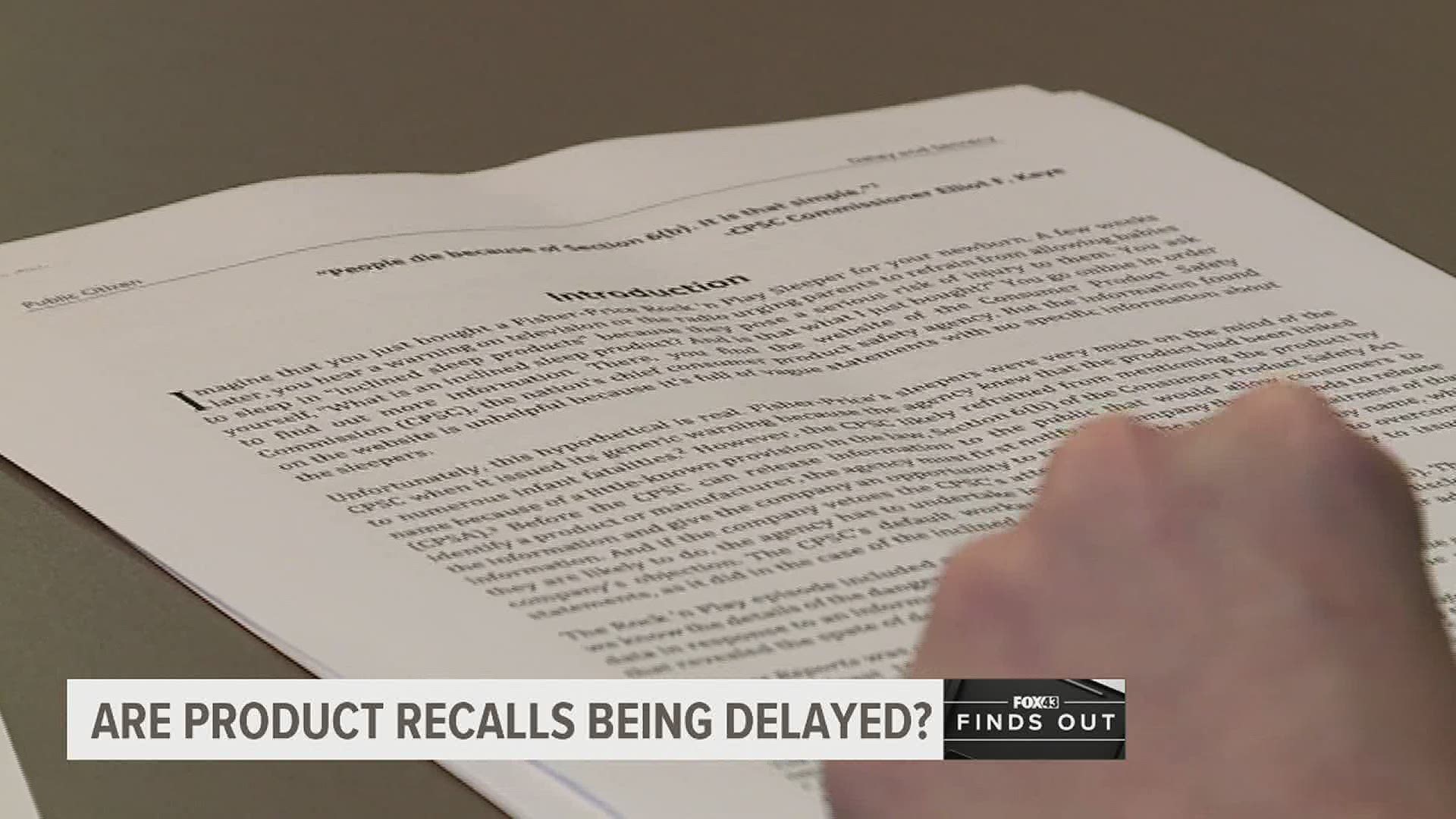 PENNSYLVANIA, USA — A peloton treadmill is at the center of a debate between the exercise company and the Consumer Product Safety Commission.

FOX43 Finds Out why some lawmakers are getting involved and how it could impact the safety of future products.

The Consumer Product Safety Commission released this video out of Virginia, where a young boy got stuck under peloton's Tread+ treadmill while another child was playing on the machine.

At one point, more than half of the boy's body is under the treadmill.

This boy is ok and was able to get out.

The CPSC is aware of at least 39 similar incidents including one death and issued a warning about the product.

Yet this treadmill is not under a recall.

Some consumer advocates say that's because of section 6B of the Consumer Product Safety Act.

That provision, "Establishes procedures for and restrictions on the commission`s public disclosure of information."

What that means is that when the consumer product safety commission wants to issue a recall, it has to contact the manufacturer of that product before it can release any specific information that would allow the public to identify it.

If the manufacturer doesn't want that information released, it can take the CPSC to court.

This is a screenshot from a video released by the @USCPSC that has now lead two US senators to introduce a new bill that could change the way product recalls are issued in the US.#FOX43FindsOut what this could mean for you and what you buy, tonight on @fox43. pic.twitter.com/oQYnCqv14x

In the past, there have been reports that 6b is the reason for delaying in issuing recalls.

Some believe the recall of Fisher-Price Rock n' Play Sleepers, which the CPSC reports are responsible for dozens of infant deaths, was not recalled for months because of 6b.

That led CPSC Commissioner Elliot Kaye said, "People die because of section 6(b). it is as simple as that" during a hearing back in 2019.

That was more than two years ago and nothing has changed.

Only congress can make a new law to change to get rid of section 6b.

Because of the Peloton treadmill, two US senators have now introduced the Sunshine in Product Safety Act that would repeal 6b.

They introduced that bill after reports that Peloton obstructed CPSC's investigation into the safety of the tread+ and hindered the Commission's ability to tell consumers about the possible dangers.

Meanwhile, Peloton's CEO denies those allegations and said the company has no plans to stop selling the treadmill.

So what all of this does this mean for you, the consumer?

it means there is a chance you could be using a product that both the government and company can know is dangerous, yet no one tells you.

similar legislation has been introduced in the past and has never been made into law.

this is just another reason to continue to read reviews - and to report any issues you have with a product that you don't believe is safe.

if you want to learn more about section 6b and recalls, you can watch our full FOX43 Finds Out investigation here.