FOX43 Finds Out: You have a right to cash in on some political calls and messages

Pennsylvania voters have been getting a lot of election-related calls and texts. FOX43 Finds Out some of those calls are breaking the law. 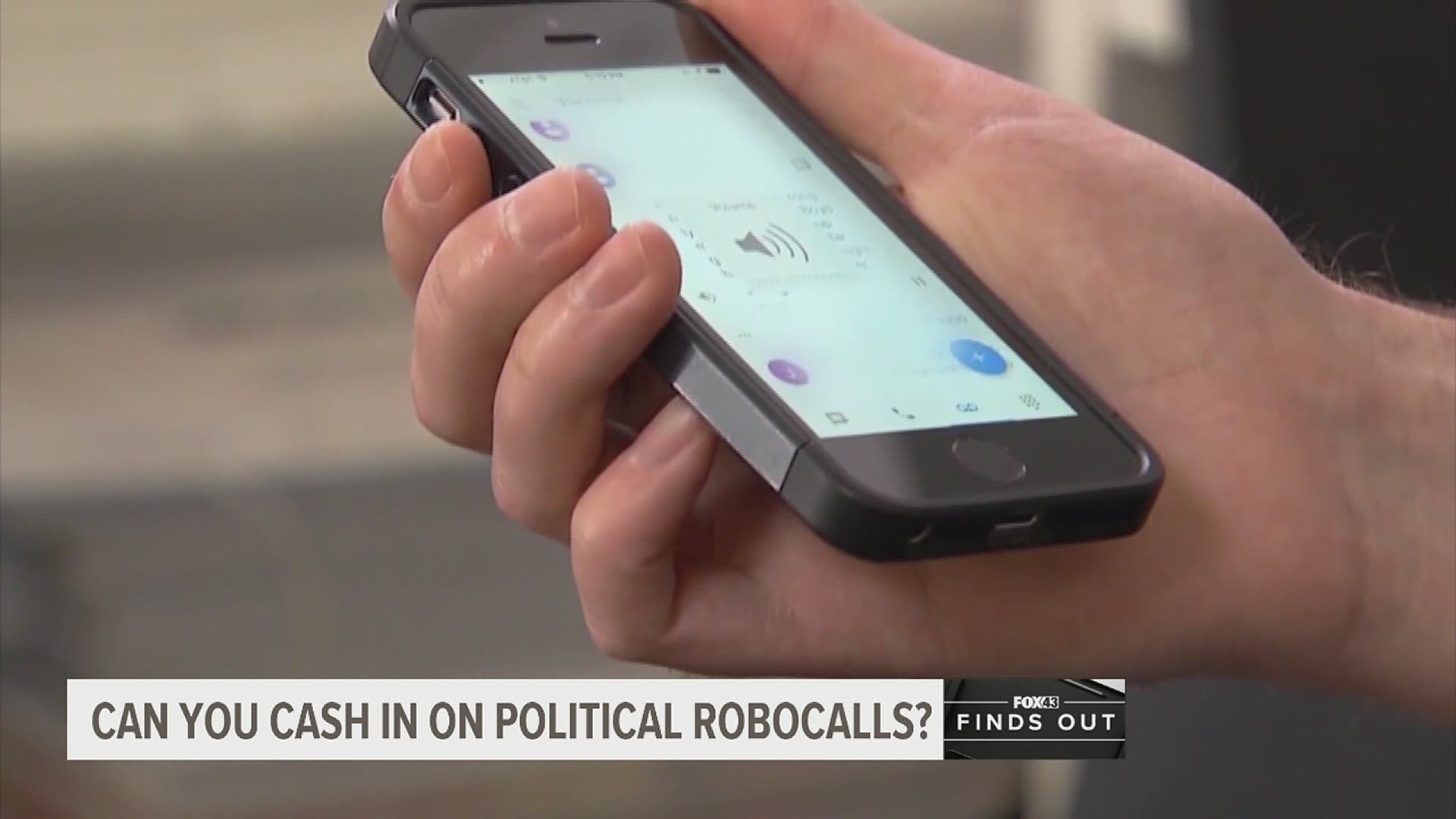 PENNSYLVANIA, USA — You can probably scroll through your call log and messages to find a bunch of calls and texts from numbers you don't know, asking if you're ready to vote for their candidate.

Some of those calls are breaking the law and you may have the right to get money in return.

FOX43 Finds Out how you may be able to turn those calls into cash.

During the election season in Pennsylvania, some of us may want to put our phones on silent until after November 3rd.

Whether it's a call reminding you to vote or a text message bashing a candidate, it seems like we can't escape these election communications.

"Pennsylvania is a battleground state, if there is going to be any abuse or potential abuse in the areas surrounding robocalling and involving voter records, you're likely to find it in Pennsylvania."

Jim Franics is a consumer protection lawyer here in the commonwealth.

He says he has plenty of clients who have made money just by answering these calls.

How can you cash in?

"They can sue under the telephone consumer protection act and actually get statutory damages, that's the best way to stop it," said Francis.

However, it doesn't cover all of those calls and texts you're getting.

First, You'll have to prove it's a robocall.

The lawyer said, "If someone is misusing voter information to intimidate or cohere consumers into paying debts or for any reason, the calls are actionable and consumers have a cause of action to bring a lawsuit against any of those robocallers."

How many political phone calls or texts have you received this week?

They can be annoying and some are also breaking the law.

Tonight on @fox43 news at 10, #FOX43FindsOut how you can make some money off of those calls if you're willing to do a little digging. pic.twitter.com/D5DZ2JNolb

Election-related Robocalls are coming to PA

The secretary of state and attorney general issued a warning about robocalls spreading Disinformation about mail-in ballots.

The callers claim personal information about mail-in voters will be shared with law enforcement agencies seeking to arrest people on outstanding warrants, and with credit card companies seeking to collect outstanding debts.

Francis said this would be one of the calls that could put money in your pocket if you get some information when you pick up.

"I would encourage the consumer to maybe engage that person. Who are you, where are you calling from? See if you get any information from them that way."

Take a screenshot of the phone number and length of that call.

You'll need all of that information if you do plan to sue, if you get enough information, you can contact that company that called you with proof it's illegal and try to settle out of court as well.

You'll also likely have to prove that you didn't give consent which is the tricky part.

The Department of State says that's considered a public record for a fee.

It includes your phone number if you provide that on your voter registration information and sometimes, that registration is enough consent for campaigns to contact you.

This is likely why you're getting a lot of election-related text messages too.

In order to cash in on those, you'll have to prove that the text was from 'auto-dialing technology.'

Getting a text message with the wrong name could be a sign of a robo-text, but it could be human error too.

In some cases, campaigns will hire people to physically hit send on those text messages, as a workaround of the law.

"If you say, hey I like this campaign and you provide that campaign with your name and number, you can be viewed as implicitly consenting to being called," said Francis.

Even though it may take a bit of leg work to prove you're getting robocalls, the lawyer says the success rate of making money is pretty good.

"The courts are very protective of consumers and these calls."

The lawyer says he was one a ton of these cases since these companies don't have much of a defense if you have proof.

It will take some time and work if you want to make money on those calls or texts and prove they're robocalls.

If you don't feel like doing that and you want the calls to stop, just say that to the caller or type it in a text, and document that too.

Once you tell a company or campaign that you revoke your consent to be contacted, they're supposed to stop.

If you have a story you want Jackie to look into, FOX43 wants to find out. Send her a message on Facebook or an email to FOX43findsout@fox43.com.