FOX43 Finds Out: What's the correlation between COVID-19 and dining out in PA?

FOX43 Finds out what we know and what we don't when it comes to contracting COVID-19 and restaurants. 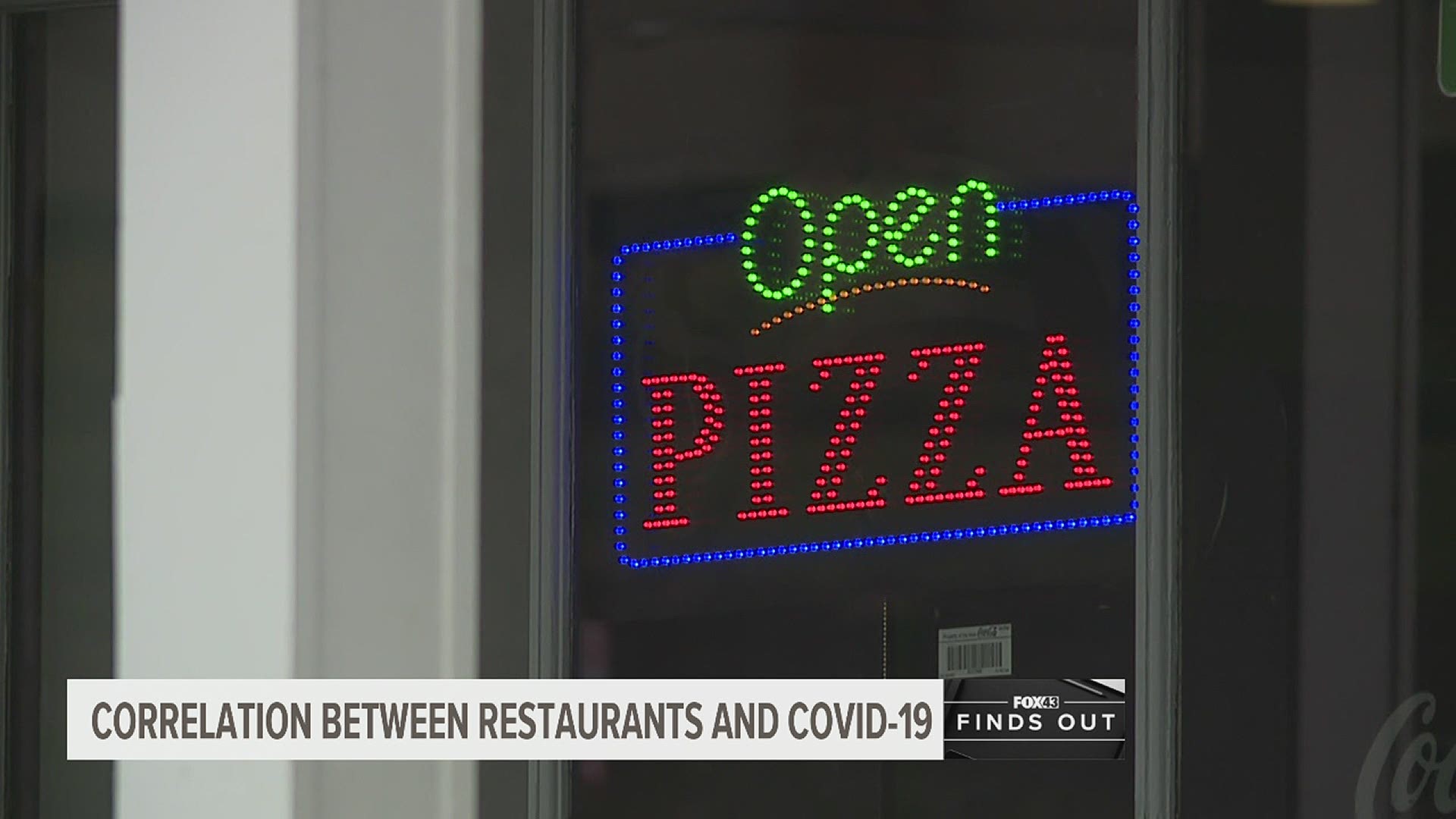 HARRISBURG, Pa. — Some Pennsylvania restaurant owners say the increase from 25% to 50% indoor dining capacity on September 21st might not even help all that much once it's too cold for outdoor dining.

They are still asking for the data behind the decisions and say as of today, they haven't seen anything concrete.

FOX43 Finds Out gives you a glimpse of what we know and what we don't when it comes to COVID-19 and restaurants.

The President of the Pennsylvania Restaurant and Lodging Association, John Longstreet, says Governor Wolf's latest announcement about restaurant capacity is a step in the right direction.

Under the current 25% indoor dining restrictions, there were estimates 7500 PA restaurants could close and 200,000 people would lose their jobs. Although Longstreet still believes there will be a significant number of restaurants that close permanently in Pennsylvania.

What he says is hard for the industry is that they haven't seen solid evidence that restaurants are contributing to the spread of COVID-19 in Pennsylvania.

"We went into this with the concept that science would drive the decisions and then that seems to have gotten abandoned along the way," said Long street.

A recent study by the CDC found adults who tested positive for COVID-19 were approximately twice as likely to have reported dining at a restaurant than were those with negative SARS-CoV-2 test results, likely because people can't wear a mask while eating or drinking.

That study looked at people in about 10 states, not including Pennsylvania.
Still, State Health Secretary Doctor Rachel Levine says the commonwealth does have enough data to make decisions.

"We had this evidence from our own qualitative and quantitative data, we also had evidence from other states, and we were also following specific recommendations from the white house task force," said Levine.

Owners say that will help, but they still want to see the data that proves a correlation between COVID-19 and dining out in PA.#FOX43FindsOut continues to question the state about that data, tonight on @fox43. pic.twitter.com/aDLJG8yKJT

A look at the DOH data on restaurants

Between July 13th and September 5th, there were 44,830 new COVID-19 cases in Pennsylvania.
Through contact tracing, the PA Department of Health says a little less than half of those cases answered questions about what they did the 14 days before they tested positive.
Of the people who did answer, less than 6% said they went to a restaurant.

Longstreet said, "And it doesn't say they got it from the restaurant."

At this point, the DOH has not provided or confirmed any evidence to prove that's where those people actually contracted the virus.

A spokesperson did give us some data related to COVID-19 transmission from bars.

FOX43 Finds Out was sent an email that read: "One bar was a shared point of potential exposure for customers and employees in at least four different counties. Another example is of a bar that was visited by 27 cases in one county, and cases then also spread to a nearby county."

We then asked for dates and locations of where that happened and if they had any similar data for restaurants. Those questions were not answered.

However, a spokesperson said the decision for dining capacity is not based on just the contact tracing data.

"Public health isn't looking at one specific thing, but looking at the entire picture. We may have some limited data on specific restaurant and bar information, we also have quantitative data, the anecdotal information, the information that we've gotten from essentially areas that took this action compared to an area that didn't take this action and that scientific analysis to be able to look at what those case studies have shown and what those case studies can translate too," said April Hutcheson, Pennsylvania Department of Health Communications Director.

FOX43 Finds Out asked several times if more specific data would be given to restaurant owners.

That specific question wasn't answered with a yes or no.

"We have more data than we have ever released on any disease, ever," said Hutcheson.

When will things get to 100% capacity?

FOX43 Finds Out asked the department of health if there is any metric that needs to be met in order for the state to feel comfortable re-opening things to the way they were before COVID-19.

Hutcheson said while there isn't really a magical number, a less than 5 percent rate of positive cases would be a key indicator.

First, she said, we need to see how that 50% capacity will work starting on September 21st.

Even though a federal judge made a recent ruling that some of the Governor's COVID-19 mitigation plans were unconstitutional, The judge said the decision doesn't deal with the restaurant capacity. "The plaintiffs did not challenge Wolf's occupancy limits, and his ruling does not impact those orders. Nor did the lawsuit challenge the Wolf administration’s order requiring people to wear masks in public."

As we inch closer to that indoor increase, there are still plenty of questions about how it will all work.