FOX43 Finds Out: roadblocks for notaries trying to offer services during COVID-19 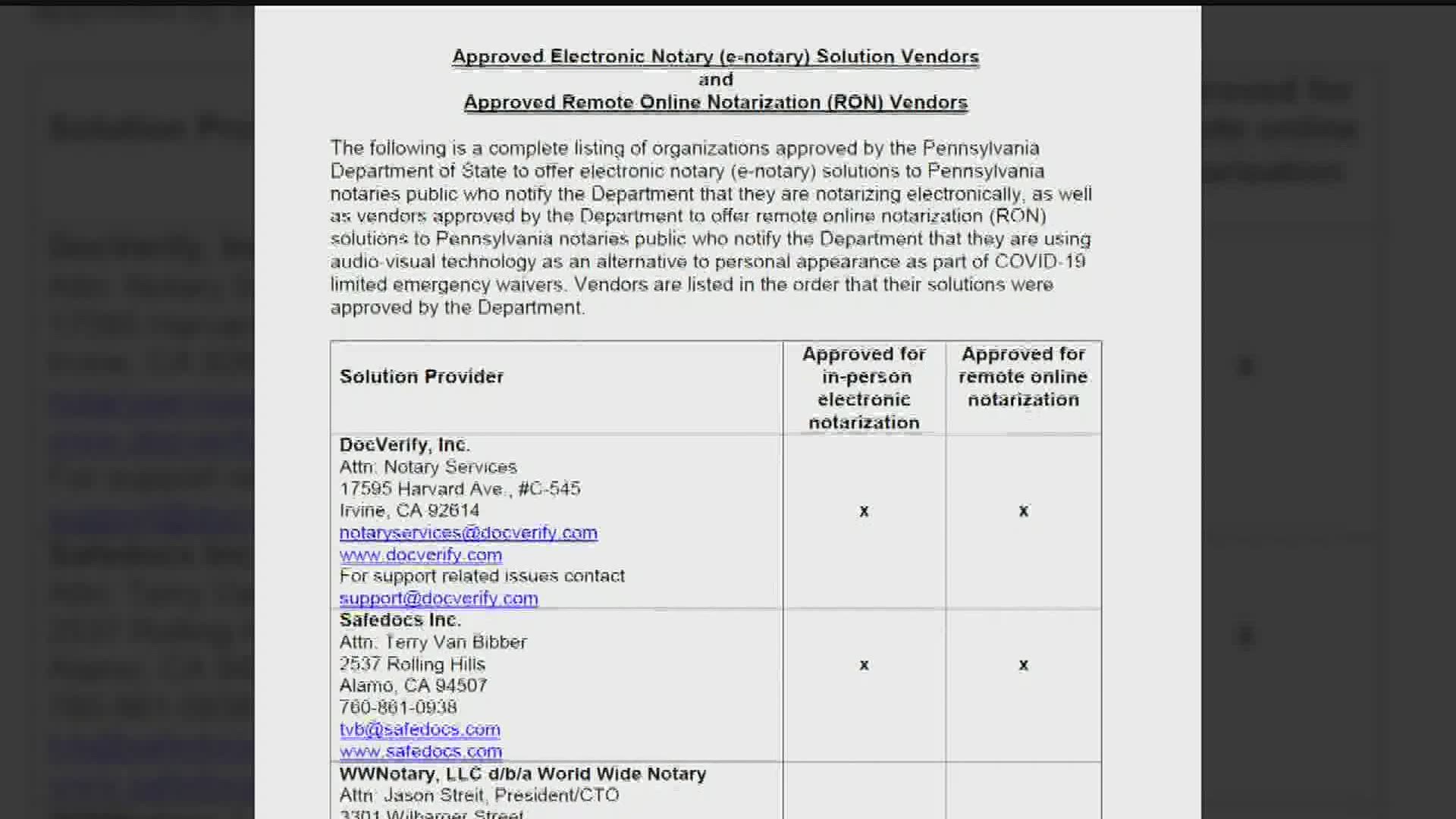 CARLISLE, Pa. — It was back on April 20th when governor tom wolf allowed for online car sales and online notary services to resume in the commonwealth.

However, some notaries say it's been weeks and they still can't do business online.

That means people who need a new or even anything notarized are having trouble finding someone to help them.

FOX43 Finds Out what is taking so long

"It's just so sad that we can't go to work. All we want to do is go to work and we can't even do that," said Dawn Sherman, who owns Sherman's Messenger Service in Carlise.

Sherman says becoming an eNotary during a pandemic, is not that simple.

"There are so many hoops that you need to jump to be approved."

First, you need to get approval to become an Enotary from the state.

Which Sherman has done, and according to the Department of State, so have more than 500 other notaries in the commonwealth since the beginning of April.

Then, Enotaries need to find a vendor to get the right video equipment to conduct online services.

You can't use things like facetime, skype or zoom.

"It takes time and money, and it's not anything that can be done overnight, unfortunately," said Sherman.

For her, it's been almost 3 weeks.

She doesn't even know how much it will cost because she's contacted several companies and hasn't heard back, "I've reached out to 4 different vending solutions, by email or by phone and have not received any information to continue on."

FOX43 Finds Out reached out to the 7 approved vendors to ask if they have a backlog or if they're even open.

One company, Pavaso, says "Our volume of requests literally jumped over 1,000% in one month."

That company alone says it has a backlog of 3 to 4 weeks.

Meanwhile, Sherman says even if she gets the proper technology, she's not even sure she could complete a vehicle sale.

"With PennDOT not being open, we can't even get tags. If he would allow us to be open, and PennDOT would not be open, we can't get plates anyway, which means we can't service those customers who want to sell a vehicle privately. We would run out of plates."

FOX43 Finds Out reached out to the Department of State and Governor, asking what notaries can do since there is a backlog right now.

The governor deferred to the DOS and then that agency didn't answer our question directly, instead, it advises notaries to continue following the guidance and protocols on its website.

We also reached out to PennDOT for clarification on Sherman's claim and got this response:

On April 20, 2020, Governor Wolf issued a new directive as remote notarization was signed into law. The Governor’s new directive allows certain licensed dealers the latitude to conduct virtual vehicle sales that comport with Pennsylvania’s COVID-19 mitigation efforts. The guidance only covers internet sales by participants who are both in PennDOT’s online registration program (OLRP) (able to process the transaction into PennDOT’s system) and who are licensed dealers by the PA Department of State.

Agents of the department who process all other types of motor vehicle paperwork, who are not included in the above definition, are currently deemed as non-life sustaining based on guidance from the Department of Community and Economic Development (DCED), until their county is re-opened in the yellow phase.