Radon is a radioactive gas that experts say is the 2nd leading cause of lung cancer. Pennsylvania is known to have high levels of the gas and yet our schools ar... 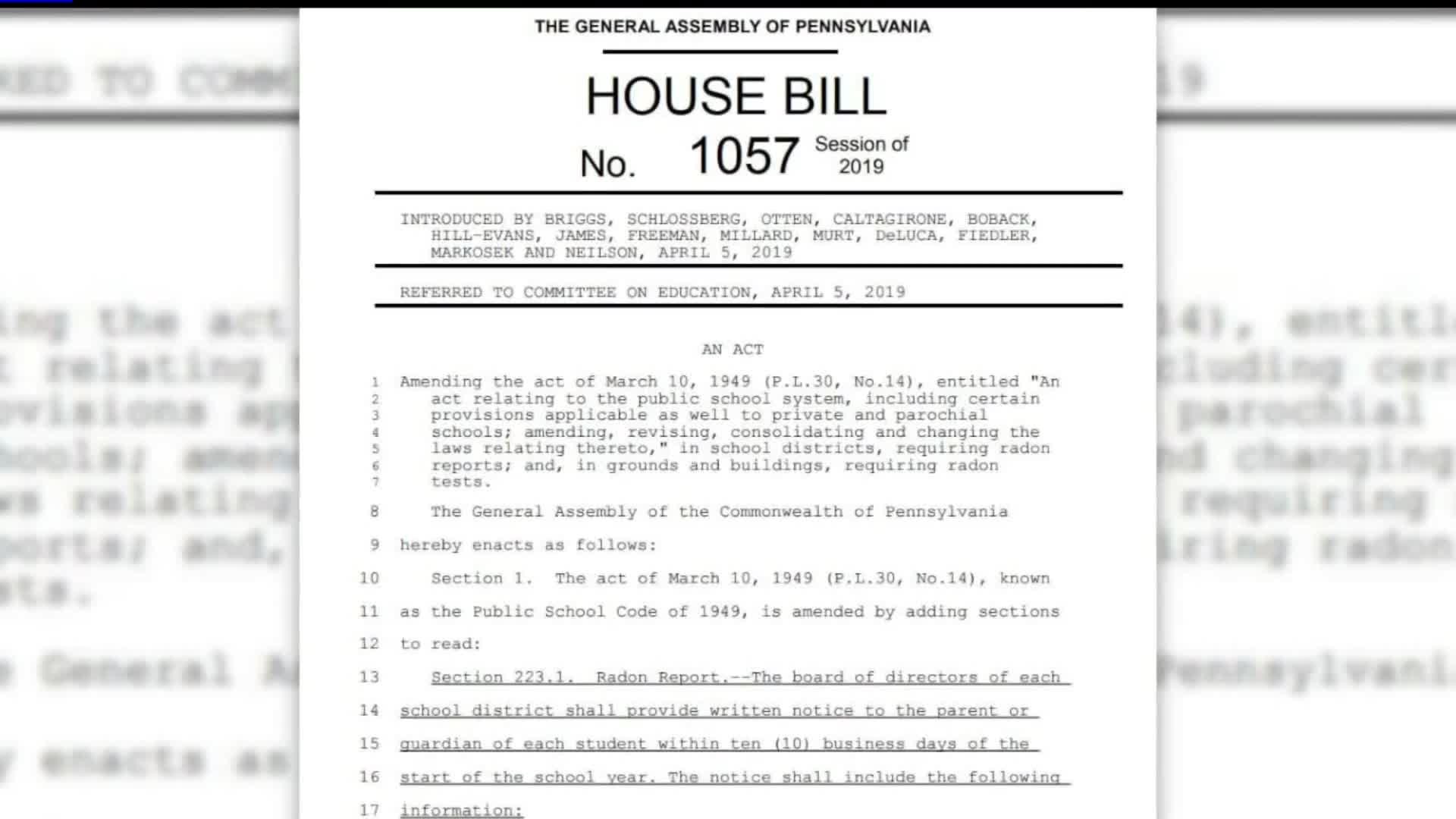 Radon is a radioactive gas that experts say is the 2nd leading cause of lung cancer.

Pennsylvania is known to have high levels of the gas and yet our schools are not required to test for radon.

Pennsylvania Representative Tim Briggs, who represents Montgomery County, wants to change that."The more I learned about it I thought it was something we should make a priority and make sure every school is tested."

He has re-introduced HB 1057, which would require radon testing in every school building in the state every 5 years.

"I don`t know why we would just kick the can down the road and put our children at risk."

Most schools in Pennsylvania are currently not testing for radon.

Over the summer, FOX43 Finds Out sent right to know requests to 9 different school districts in 9 different counties, selected at random.

Only one school in one school district tested for the gas in the past 5 years.

That was Conestoga Elementary School in the Penn Manor School District.

The levels at that school in Lancaster County were acceptable under federal guidelines.

Two other schools had records of testing, but those happened more than 5 years ago.

Both Central York and Shippensburg area schools though did have classrooms that had levels that are considered high.

Central York provided us records of mitigation Shippensburg did not.

The rest of the schools had no records of ever performing a radon test.

All of this is why Rep. Briggs says testing in PA schools needs to be a requirement.

"Bottom line, we just have to get this done anyway we can."

The problem with a state mandate though is funding.

Conestoga Elementary school did radon testing back in august of 2015.

That`s just for one school and it`s one of the smaller schools in the district.

Now there were no problems here, so the district didn`t have to pay for any mitigation.

If that was the case though, that would have cost the district even more money.

Which is why Rep. Briggs says the only way this bill will pass is if lawmakers can agree to move around some money.

"If the state is requiring school districts to do this, we should probably figure out a way to help pay for it."

The state does get some money from the federal government from the State Indoor Radon Grant.

That money goes towards radon education and public outreach.

At this point, Briggs says any option is on the table when it comes to radon testing requirements and how to pay for it.

He believes the bill would need more co-sponsors on both sides of the aisle in order to become a law.

"We should be partners with our local school districts to make sure whatever we can do, kids are safe and healthy and learning and being productive citizens in the future."

We also did ask Briggs if he knows of any studies or examples of people who were diagnosed with lung cancer who were able to pinpoint radon in schools as their reason for developing the disease.

He says he doesn`t know of any specific examples.

Though he says if we know it`s a potential danger, we should try to eliminate it.

Here's more information on how to test for radon in your home.

Send an email to FOX43FindsOut@FOX43.com.