FOX43 Finds Out if the PA Department of Health is tracking cases COVID-19 cases from restaurants and what question the DOH is not asking during case investigations. 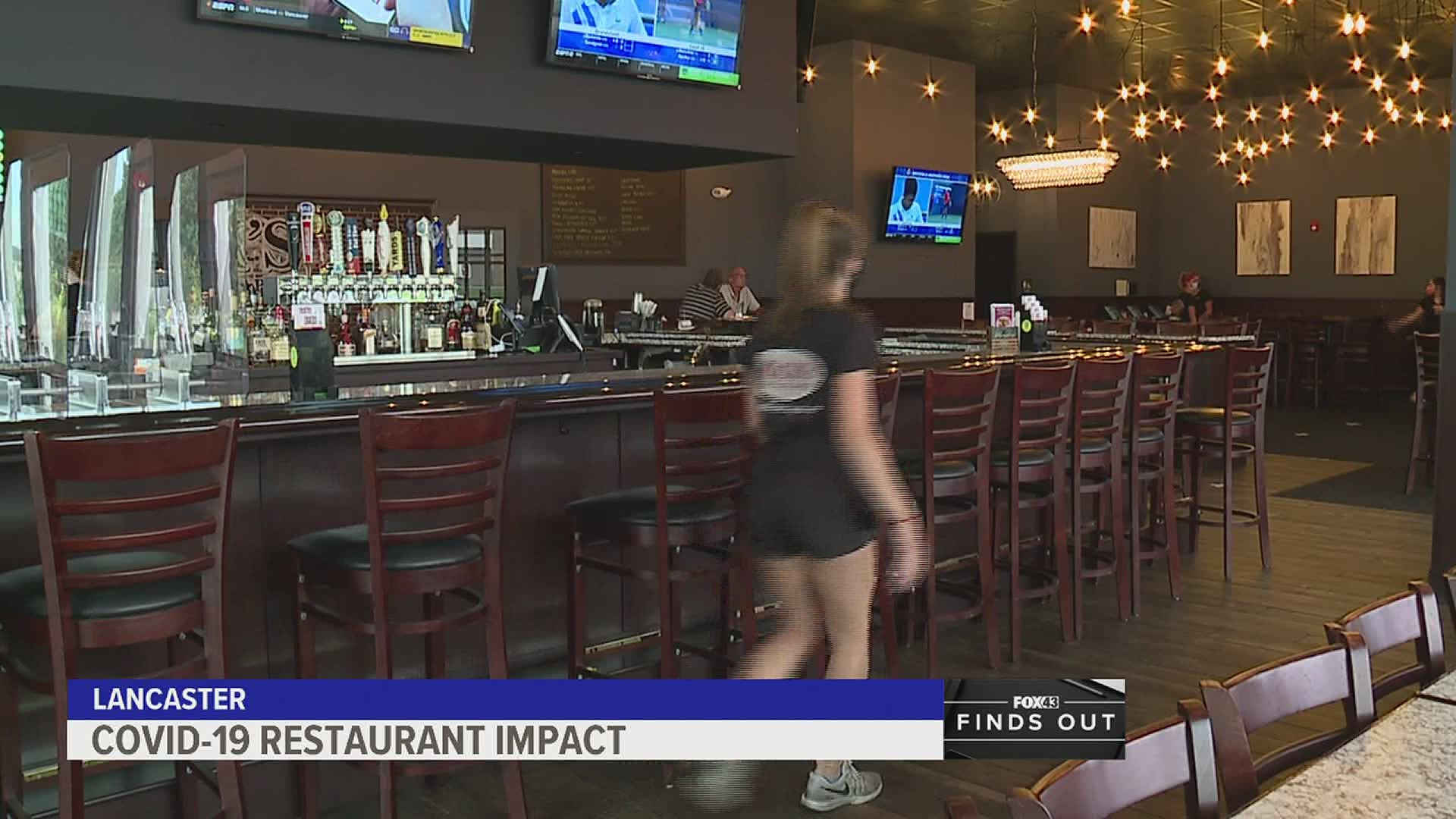 LANCASTER, Pa. — Restaurant owners in Pennsylvania say they have not been able to see a lot of data related to why indoor dining at restaurants is capped at 25%.

While some other states have been able to link some COVID-19 outbreaks to bars and restaurants, Pennsylvania has not released any specific data on that here in the commonwealth.

The PA Department of Health did say back in July that Alleghany County was seeing an increase in COVID-19 cases in younger age groups, which was attributed to bars and restaurants. However, no specifics about the locations or number of cases were ever released.

Contract tracers are asking more questions though to get a better picture of what's happening here in south-central PA, however, restaurant owners believe there still isn't enough information to justify capacity limits.

As FOX43 Finds Out, some restaurant owners say they have no idea how they'll survive the rest of the year with those restrictions in place.

There are a lot of empty seats inside of Mick's All American Pub in Lancaster.

"There is no possible way we'll be profitable this year," said Mick Owens.

He's the owner of 4 restaurants and says the current COVID-19 capacity restriction on indoor dining is not making it easy to do business.

"It's very hard for a restaurant owner to be at 25% capacity when we walk into a grocery store or big box store and absolutely no capacity limits, many times no mask being worn."

Owens wants to see the cold hard facts behind the wolf administration's decision.

"If you want to reduce traffic fatalities, you don't limit how many people can be in a car. You make them wear seatbelts and you ask them to enforce the speed limit. Barriers, masks, those are the seatbelts in the restaurant industry."

He's not the only one. John Longstreet is the CEO of the Pennsylvania Restaurant and Lodging Association.

"There is no science that shows that 25% is any safer than 50% if you're doing proper social distancing and face masking, but there is a lot of data that shows that restaurants will close at 25%."

He says Yelp did a nationwide survey when it came to restaurant closures during COVID-19 and the numbers for Pennsylvania could be devastating.

"That's 7,500 restaurants statewide, roughly that number is a little low, that would not reopen. That comes out to be about 30% of the total restaurants in the state," said Longstreet.

If all those restaurants close, Longstreet says 200,000 people in Pennsylvania's restaurant industry would be out of work.

Restaurant owners in PA say they are starving for business since indoor dining in the state is capped at 25%.#FOX43FindsOut if the PA Department of Health is tracking cases COVID-19 cases from restaurants & what question the DOH is not asking.

The ability to offer some outdoor dining has helped restaurants keep people employed and pay the bills for now, but not for long.

"Once we get down into the 40 degree nights and 40 degree days, that's not going to be a viable solution for anyone."

The Pennsylvania Restaurant and Lodging Association wants indoor dining capacity to go back up to 50% and to get a look at data that proves otherwise.

Where is the data?

FOX43 Finds Out has also been asking the department of health for that data too.

Here's what we've been told so far.

During that time, contact tracers began asking more specific questions about the types of businesses people visited in the 14 days before they tested positive.

Only about half actually answered those questions.

RELATED: PA Department of Health releases information on COVID-19 case investigations, including some data on bars and restaurants

And of those who did answer, only 864, or about 5.5% said they went to a restaurant in the 2 weeks before getting COVID.

That just means those people visited a restaurant, at this point the DOH has not provided any evidence to prove that's where those people actually contracted the virus.

The DOH data also shows that 88% of people who tested positive and did answer contract tracers say they did not go to a business at all in the 14 days before testing positive.

We emailed a department of health spokesperson, asking if they're using this data to make any upcoming decisions about restaurant/bar capacity.

That question wasn't really answered, but they did email us back writing "In order to successfully reopen restaurants at 50% or fully, we need to remain vigilant about taking precautions, especially wearing a mask that covers our noses and mouths while around other people. This is an easy, yet important action that has been shown by research to reduce the spread of COVID-19."

Contact tracers are not asking if people are wearing a mask.

FOX43 Finds Out then asked if contact tracers are asking people if they wore a mask in public during the 14 days before they tested positive for COVID.

Again, the DOH spokesperson emailed us this response "We do not currently ask questions regarding masking as part of our case investigations. It is important that as part of the case investigation process, we are able to get as much information as possible from the confirmed case as far as potential exposures, close contacts, where they have been, etc. Any question that may prevent a complete case investigation can hinder our public health response."

Of that 5.5% of cases over the past few weeks who said they went to a restaurant, we don't know if they wore a mask or not.

That is what Owen says is so frustrating for restaurant owners.

"There has been absolutely no science behind this."

Longstreet says, "The only way, unfortunately, that you could solve this problem is to figure out a way that restaurants can operate safely at a capacity where they can continue to employ people and be profitable."

RELATED: Restaurant owners hope for increased capacity, but it may not happen anytime soon

The Department of Health also cited the White House Coronavirus Task Force report to Pennsylvania, which recommended continuing to limit indoor dining at restaurants to 25% capacity.

There is some legislation in the works, both federally and on the state level, that could help restaurants financially.

So far, none of those bills have been passed.

if you have a story you want Jackie to look into, FOX43 wants to Find out. Send her a message on Facebook or email FOX43FindsOut@FOX43.com.