Shortly after J.J. Roach, 16, of Manheim, had his story air on FOX43 in February, a Cumberland County business commissioned him to do dozens of original works. 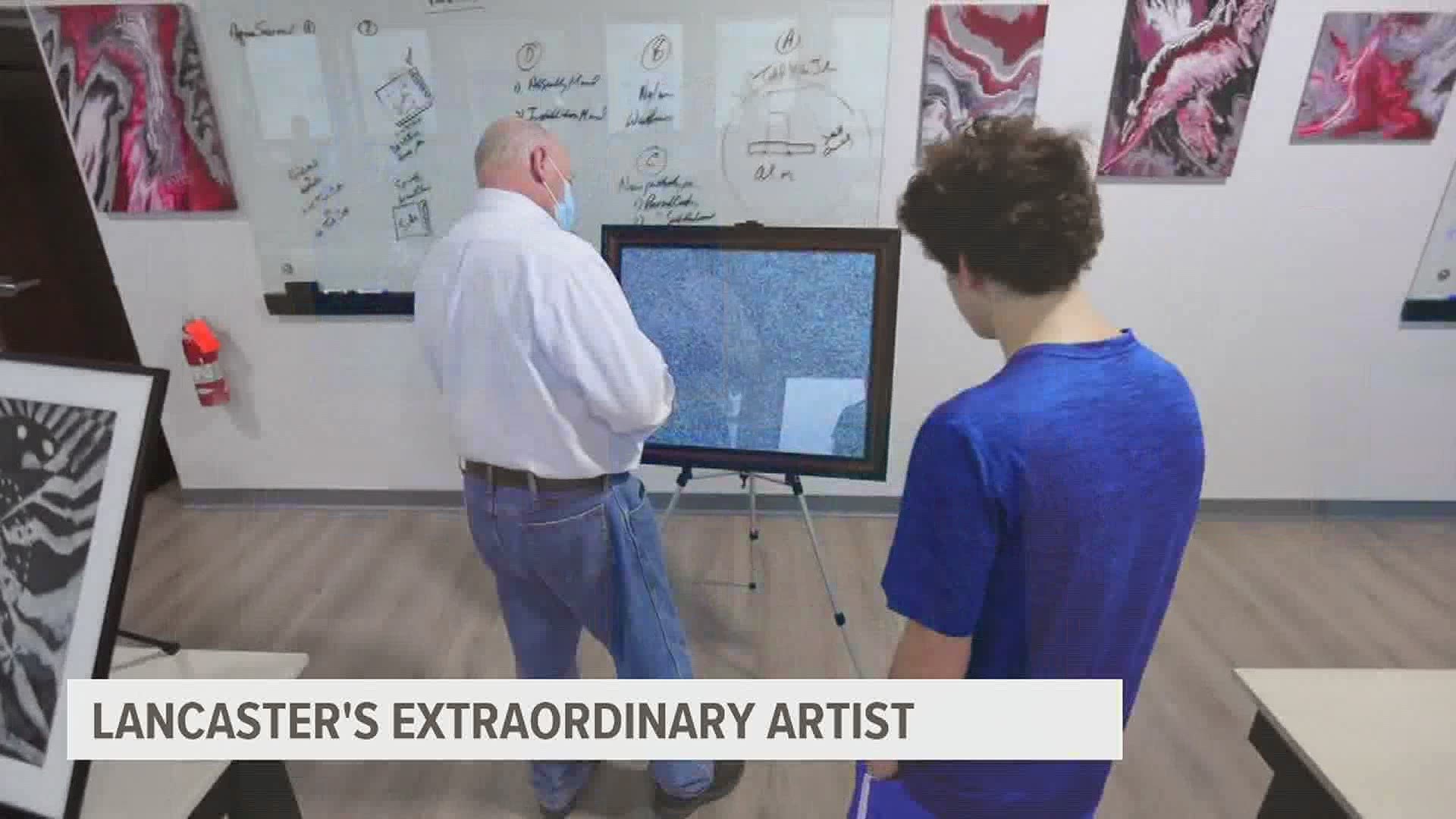 LANCASTER, Pa. — It's a Friday night in Lancaster, and the Mulberry Art Studios downtown is buzzing over the Red Rose City's newest celebrity.

Joseph Roach, the 16-year-old abstract art wunderkind from Manheim, is holding court in front of family and friends. Around him, dozens of original artwork -- pen-based drawings and oil-based paintings -- line the walls.

"My artwork brings people together, and makes them happy," Joseph says.

All of this -- the bright lights, the attention -- is new to Joseph, if not altogether uncomfortable. He lives with autism, diagnosed when he was in Kindergarten. His mother, Carol, says Joseph was a miracle baby after his was born with the umbilical cord wrapped around his neck. He struggled in his early years, until he got to Manheim Central Middle School, and crossed paths with art teacher, Julie Hibshman.

"He was creating these elaborate designs and they grew bigger as he experimented with more materials," Hibshman said.

Mrs. Hibshman, as Joseph still affectionately calls his teacher, helped tap into and unlock someting great within Joseph. Autism is no longer a disability. Instead, it's a super ability. Thanks to Hibshman, the Roaches acknowledge, J.J. Roach, Joseph's artist alter ego, was born.

From 7th grade art class experimentation to full-scale art show with dozens of original pieces, there was no way Mrs. Hibshman was going to miss her prized pupil's big night. J.J. Roach may have been the VIP, but Julie Hibshman was the guest of honor.

"When my mom told her a little bit about my story on how she's impacted me, she was about to cry," Roach said.

He even presented her with a personalized painting, with a handwritten note on the back, saying, "Dear Mrs. Hibshman, Thank you for helping me find my passion in art and thank you for not giving up on me. I will always remember you. By, J.J. Roche."

This night is a celebration, and when the party settles, J.J. goes right back to work at his first job. Shortly after his story original aired on FOX43 in February, J.J. was contacted by Michael Carlini, President and CEO of Oven Industries, a technology manufacturing company in Camp Hill. He had an idea on how to envigorate his employees. Carlini hired J.J., commissioned him to do original paintings and drawings to be placed throughout the business, functioning as think-pieces for inventors.

"Their job is all about creativity and that is what Joey's art is about," Carlini said. "Having these pictures in our building is very stimulating. And it's fun."

Roach was originally hired to do "20 to 25" pieces, though Carlini admits it's likely closer to "40 or 45" now, hanging on the walls throughout Oven Industries' research and development room and showroom. He wouldn't divulge how much he's paying J.J., but says it's "in the thousands."

"When I see the artwork and I see the benefit of it it is truly brilliant," he said.

When the art show is done, J.J. is once again Joseph, though more confident than ever before. He is back in school at Manheim Central High School and does plan to graduate. Roach and his family hope to take his artistic talents and turn them into a full-time career after grauadtion, though.