Joseph Roach, 16, of Manheim, Pa. is an abstract art prodigy. He was diagnosed with autism at 5, and his drawings and paintings help him thrive. 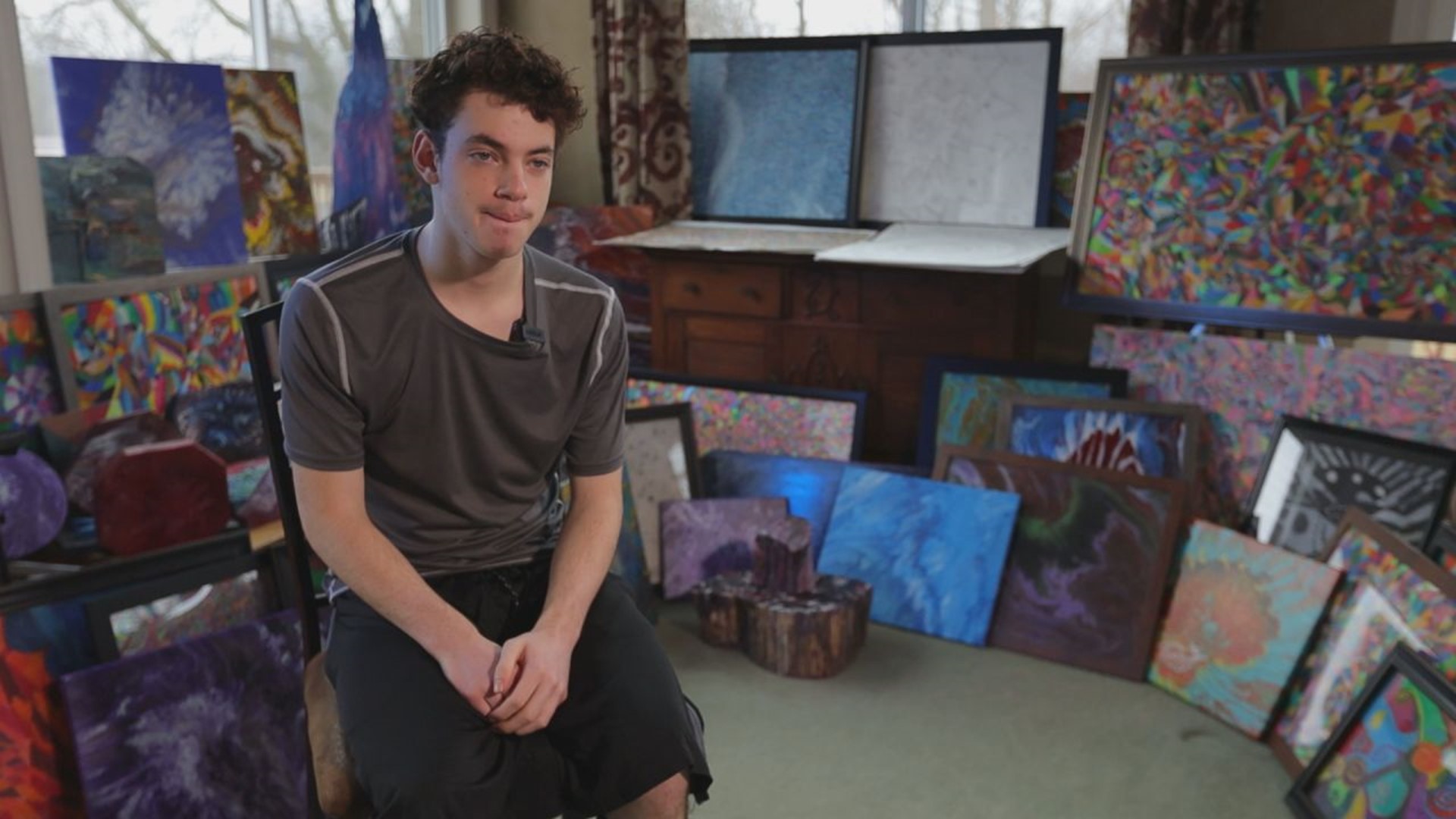 MANHEIM, Pa. — Joseph Roach looks down at the dining room table where a bevy of colored pens await, easily well over 100, sitting there still in a perfectly symmetrical pattern so that it looks like a fan. Roach designed it this way, and now he studies them, eventually picking his favorite 10 pens, before turning back to his blank sheet of white paper.

No one, lest of all Joseph, knows what he is going to draw when he sits down. It's part of the beauty of this beautiful mind. Sometimes, it starts with a line in the corner. This time, it's a cirlce in the middle of the page.

"Then my mind takes over," he says. "It feels like someone else is in my head giving me an idea for a piece."

Joseph Roach is a 16-year-old abstract art prodigy at Manheim Central High School in Lancaster County. On the surface, watching Joseph draw is like watching something in slow motion. There is pinpoint precision and attention to detail. Every line has a purpose. Each color is specifically chosen to match an ongoing pattern.

Inside his mind, however, synapses are firing in a way few can understand.

"We always knew something was going on," his mom, Carol, said. "He went to diagnostic kindergarten when he was 4 1/2 or 5 years old and that’s when he was diagnosed with the autism."

Joseph is one of 5.4 million Americans under the age of 18, according to the Centers for Disease Control and Prevention, diagnosed with autism. When he was born, Joseph also had a hearing impairment and a severe case of attention deficit hyperactivity disorder, better known as ADHD. He also battled stomach issues when he was younger. His mom is convinced it was all connected to birth.

"When he was born he was considered a miracle baby," Carol said. Not only was Joseph born with his parents later in their lives -- he has two much older siblings -- but when he was born, the umbilical cord was in a knot around his neck.

School was never easy for Joseph, and finding hobbies was difficult. It's why when he was 12, and his art teacher noticed he had an eye for creatively drawing, it was something to keep an eye on.

It was 7th grade, and Joseph remembers being into space at the time.

"I was reading a book about universes," Joseph said. "I saw the Milky Way when I was reading about it, and then a year later I was drawing the swirl out of nowhere. I had no idea what the swirl was."

Joseph started drawing galaxies from memory in a notepad he kept on him at school. His art teacher noticed, and gave him the option: draw what you did over the weekend or draw whatever you want.

"I was never good at drawing people or animals," Joseph says. So he drew what he wanted.

Joseph's mom, Carol, adds, "She finally decided to let him be Joey. Slowly, it turned into something beautiful."

Over the course of the next 2-3 years, Joseph went from dynamic doodler to arriving artist. He started going by the moniker "J.J. Roach", which he signs on the lower right corner of his each of drawings. It's almost like a superhero alter ego; proof of everything he can do instead of how he's been limited earlier in life.

His connection to space metaphors are still with him, as well. Much like how his artistic ability started small and exploded into something great in a short period of time, each piece of work carries a similar mindset.

"It's like this explosion of joy," his mom says.

FROM DISABILITIES TO SUPER ABILITIES

In January of 2020, sensing their son was on the cusp of something potentially great, Joseph's parents contact April M. Koppenhaver, owner and curator of the Mulberry Art Studio in Lancaster. They wanted to see how Joseph, or J.J. for that matter, matched up against other artists of the region.

April took one look at the portfolio Joseph provided, and scheduled a showing at the studio for a few months later.

"It was explosive, alive, vibrant, you could tell it’s fun," April remembers her reaction to seeing Joseph's work for the first time. "It was different and unique and I loved his expression."

Three weeks before the showing was scheduled, April 3, 2020, the COVID-19 outbreak was officially labeled a pandemic, and the world around the Roaches shut down. Schools were closed, and Joseph's showing was postponed indefinitely.

Through it all, art continued to be Joseph's driving force. At a time when the pandemic has affected even the most mentally strong, art has given Joseph a purpose and motivation to get even better.

"Art has given him a meaning and focus for his life. It’s surrounded him with people who tell him he’s doing something good," Carol said. "Without art, I think we’d all be a little lost, and fearing for the future for him. And now I’m not fearing I don’t fear because I know. It's coming. He’s got a big future that he doesn’t even understand what’s coming."

The Roaches have stayed close with April and the Mulberry Art Studio, and on April 2 this year, Joseph will have his showing, nearly one year to the day the pandemic took it away from him.

Neither he, nor his parents know what's in store after high school. His mom envisions taking a few college classes but ultimately jumping right into the art fray full-time. They recognize his prodigious talent, and realize the potential money involved. It's not nearly as important as Joseph's happiness, but it's a factor nonetheless.

As for Joseph, he thinks his art could help others like him.

"It could be another hidden secret for other people to help them with their disabilities," he says.

No longer defined by his diabilities, all Joseph Roach has now are super abilities.